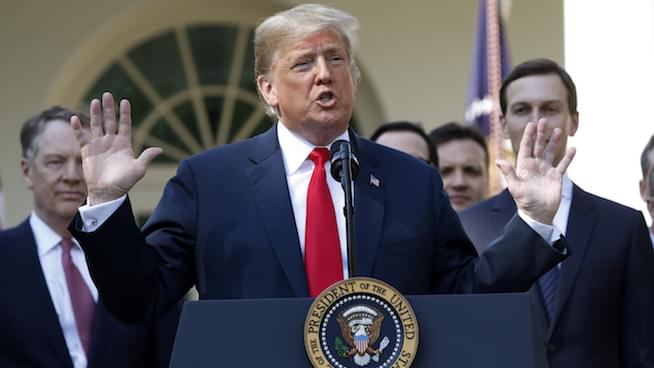 President Donald Trump speaks as he announces a revamped North American free trade deal, in the Rose Garden of the White House in Washington, Monday, Oct. 1, 2018. The new deal, reached just before a midnight deadline imposed by the U.S., will be called the United States-Mexico-Canada Agreement, or USMCA. It replaces the 24-year-old North American Free Trade Agreement, which President Donald Trump had called a job-killing disaster. (AP Photo/Pablo Martinez Monsivais)

“The idea that it is just costs, and all we should be talking about is costs, is really lacking any kind of common sense.” – Alan Zibel, Public Citizen Researcher

Trump and his conservative base consistently illustrate regulations as unnecessary evils that encroach on business and drag down the economy. What they aren’t telling you is in their quest to eliminate “red tape” they are outright robbing the pockets of Americans.

The administration’s war on regulation has the potential to deprive American consumers, workers and the U.S. economy of more than $2.3 trillion in benefits over the next two decades, according to a recently released Public Citizen report. The advocacy group’s analysis, which examined the implications of permanently eradicating or severely undermining 13 public protections that have been repealed, delayed or targeted by the current White House, estimated a $16,700 loss per household.

Public protections evaluated in the report included the clean car standards, the fiduciary rule, the energy efficient light bulbs rule, the ozone rule and the overtime pay rule. The calculations were primarily based off of cost-benefit numbers developed by the Obama administration.

Host Michael Finney invited the author of the report, Public Citizen’s Alan Zibel, onto his show to offer a more extensive breakdown of the results. According to him, it isn’t just about the financial well being of the country, it’s lives that could be at stake!

He told Finney: “The idea that it is just costs, and all we should be talking about is costs, is really lacking any kind of common sense.”

Zibel also said it’s no coincidence that California has the strongest performing economy in the nation and the regulations to match, the two go hand-in-hand.

Listen to their conversation below!