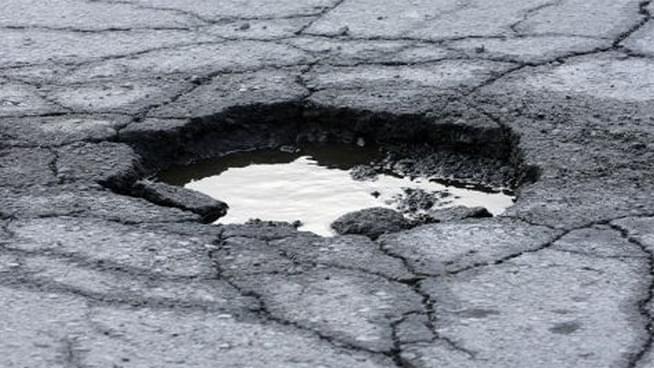 An anonymous group of Oakland residents have begun filling potholes in the crumbling streets during the night. An Instagram account, with it’s first post on April 21, was created by the group, showcasing some of the potholes they have already filled. Today on the Pat Thurston Show, one of the members of the group, whom we’ll refer to as the Vigilante, called in to KGO to explain the inside scoop on the reasoning behind the project, how much time and money it takes to fill the potholes and their ultimate end goal.

Although most people are praising the Vigilantes for their work, others brought up the safety concerns that could arise while the men are working. In their conversation, the Vigilante pointed out that the potholes themselves are more unsafe than their work filling them. “We back up our truck, put the hazard lights on and make sure no one can hit us while we’re filling the pothole. Once we fill it, we make sure its flat. Then we roll over it with our truck to make sure its flat and ready to go,”

The Vigilantes use EZ Street Asphalt, which he explained is the same material the City uses to fill potholes. The group is currently purchasing all of the materials with their own money. “We’ve been attacking some pretty big potholes and those have been running us about $100/bag. It takes about ten to fifteen minutes to fill a big one,” the Vigilante told Pat. While the vigilantes currently started this project with their own money, they are seeking donations so that they can continue to keep up with all of the requests in their Instagram comments.

The ultimate goal for the Pothole Vigilantes would be to begin crowd funding for fixing potholes. “The endgame that first originated this is to build an app, sort of like an Uber for potholes. Anyone in the street can take a picture of a pothole, it will geolocate where that is, tell us how big it is and then it will essentially estimate how much it will cost to fill that pothole,”

If you would like to donate to the cause, the group is asking donations be sent to their Venmo account, @potholevigilantes. Listen to the full conversation between Pat Thurston and the Vigilante below.