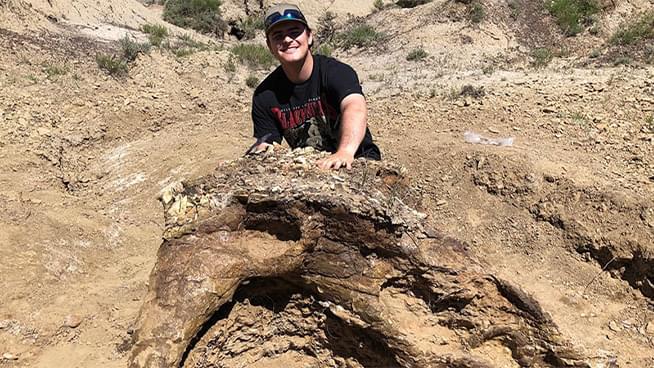 Part of a 65-million-year-old Triceratops skull was uncovered by a UC Merced student on a paleontology dig in the Badlands of North Dakota. Biology student Harrison Duran joined Mayville State University professor Michael Kjelland on the dig. The pair named the skull “Alice” after the woman who owns the land they excavated on.

Duran and Kjelland met at a biotechnology conference and their passion for dinosaurs led them to found Fossil Excavators, a non-profit “devoted to cross-disciplinary research collaborations and opportunities with a focus on Paleontology, Paleoecology, Paleobiology, Paleobotany, Paleopalynology, Molecular Paleontology, and even Archaeology.”

“I can’t quite express my excitement in that moment when we uncovered the skull,” Duran expressed in an interview, “I’ve been obsessed with dinosaurs since I was a kid, so it was a pretty big deal.” Read more about the amazing discovery here.