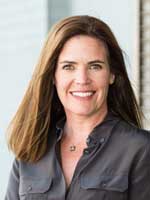 Courtney Greene Power is the General Counsel of Niantic, Inc., a technology company specializing in augmented reality and mobile experiences. Niantic’s games, including Pokémon GO and Harry Potter: Wizards Unite, have been downloaded over 800 million times. Courtney and her team support all aspects of Niantic’s global legal and public policy needs. Prior to Niantic, Courtney was a Senior Legal Director at Google, managing teams that supported products including Google Earth, Google Maps, and Street View. Prior to joining Google, Courtney was an associate at Gibson Dunn & Crutcher, and she held positions as a software product manager and consultant before becoming a lawyer. Courtney received her JD from University of California Hastings College of the Law, where she currently serves on the Board of Directors, and received an AB in History & Literature from Harvard College.

As part of our Women Who Lead series on KGO, Pat Thurston interviews Courtney about her successful career, mentorship, and workplace challenges