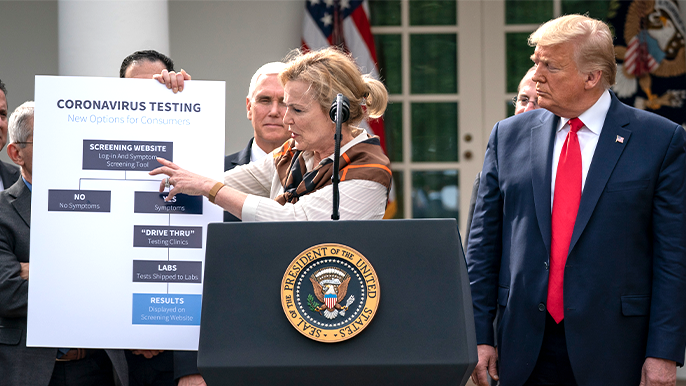 “To unleash the full power of the federal government…I am officially declaring a national emergency.”

As of this afternoon, President Donald Trump declared a state of national emergency to combat COVID-19.

In President Trump’s address he said,  “The action I am taking will open up access to up to $50 billion… for states and territories or localities in our shared fight against this disease. In furtherance of the order I’m urging every state to set up emergency operation centers effective immediately.”

Trump continued, “I’m also asking every hospital in this country to activate it’s emergency preparedness plan, so that they can meet the needs of Americans everywhere.”

Trump expressed that you should only get tested if you think you have been exposed to the virus, but to listen to your doctor’s advice overall. Last weekend Trump was photographed with a Brazilian official who tested positive for coronavirus. Trump said doctors at the White House told him he does not have any symptoms, but he will most likely be tested for the virus anyway, however he made it clear it is not due to the Brazilian official.

President Trump tweeted a clip of his announcement further explaining his efforts toward ending the virus, as you can see below.

We will remove or eliminate every obstacle necessary to deliver our people the care they need. No resource will be spared! pic.twitter.com/KcDZ9YoXZE

Trump has already made travel bans into America from Europe until April 11th, 2020 in attempt to contain the spread of the virus. The announcement startled many people into preparing for a self quarantine. Because of this, many stores are sold out of all food, toiletries and other items individuals deem necessary to survive an isolation if need be.