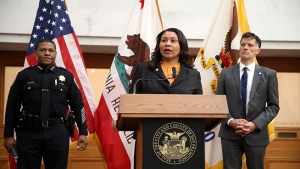 “Part of what we are also seeing is definitely a change in behavior, a change in what people do in our everyday lives…the new normal temporarily in an effort to protect public health.” -Mayor London Breed

US Moves Closer to Shutdown Amid Coronavirus Fears

The CDC is recommending that gatherings of 50 people or more in US be canceled or postponed over the next eight weeks because of the coronavirus pandemic. Officials and businesses on Sunday took forceful measures to halt the virus’s spread. Theme parks closed, Florida beaches shooed away spring breakers and governors in Ohio, Illinois, Washington and California ordered bars and restaurants to close. New York City, New Jersey and elsewhere are considering similar measures. The nation’s top infectious disease official said he would like to see a 14-day national shutdown imposed, but it does not appear President Donald Trump will order that at this time.

Asian stock markets and U.S. futures fell Monday after the Federal Reserve slashed its key interest rate to shore up economic growth in the face of mounting global anti-virus controls that are shutting down business and travel. On Wall Street, futures for the benchmark S&P 500 index fell 5% on Sunday night and triggered a halt in trading. The Fed cut its key rate by a full percentage point – to a range between zero and 0.25% – and said it would stay there until it feels confident the economy can survive a near-shutdown of activity in the United States.

There Goes the School Year

On Sunday, officials in Ohio and Texas said millions of students may remain out of school for the rest of the academic year in an effort to stop the spread of a deadly coronavirus that has reached pandemic status around the world.

As of late Sunday, 33 states had decided to close public schools for anywhere from two weeks to a month. But Ohio Governor Mike DeWine and Texas Education Commissioner Mike Morath said that students in their states may not return to school for the rest of the academic year.

On the Other Hand, Some Schools in Japan Reopen After a Two Week Break

Some elementary and junior high schools in Japan resumed classes on Monday, around two weeks after closing to prevent the spread of the new coronavirus.  Infections have risen steadily in Japan over the past two months, but there has not been the explosive growth in cases or deaths seen in some other countries, and life seemed to return to normal in Tokyo on Sunday. With children much less affected by the virus than adults, and their parents mostly still working and commuting as normal, the decision to close schools had been controversial.

Shimane Prefecture, which had not seen any confirmed cases of the virus, chose not to close schools at all. Now, the education boards in several cities have decided to reopen schools. That still leaves the vast majority of Japan’s roughly 38,000 schools closed.

United Airlines is laying out a dire situation for airlines. It will cut 50% of its flying capacity in April and May and expects planes to be only 20% to 30% full at best. United will seek unspecified help from the federal government to navigate a sharp downturn in bookings.   The CEO and president told employees the airline handled a million fewer passengers in the first two weeks of March than it did a year ago and revenue fell $1.5 billion below the year-ago pace. They wrote, “The bad news is that it’s getting worse.”

CDC Hints Sports Schedules Could be Shut Down Through April

The already-delayed professional sports seasons in North America could be on hiatus for significantly longer than first planned. New recommendations from the Centers for Disease Control and Prevention to eliminate crowds of 50 or more seem to suggest that sports in this country could for all intents and purposes be gone until May, if not later.

That’s twice as long as the 30-day shutdowns that the NBA, NHL and Major League Soccer decided to put into place last week. Major League Baseball also was going with what essentially was a 30-day shutdown after canceling the rest of spring training and pushing back the start of regular season play for two weeks; Opening Day was to have been on March 26.

The White House is putting in place new measures to protect President Donald Trump and his staff during the coronavirus outbreak. Starting Monday, the White House will take the temperature of anyone entering the complex, from visitors to members of the press corps. The new measures expand on screenings the White House began on Saturday for anyone who will get close to President Trump and Vice President Mike Pence. Members of the press corps are also taking steps to limit their own exposure to the coronavirus.

The Peace Corps is telling its volunteers around the world that it is suspending all operations globally and evacuating all volunteers in light of the spread of the new coronavirus. In an open letter to volunteers, posted Sunday on its website, the federal agency’s director, Jody Olsen, says the decision follows recent evacuations in China and Mongolia due to the outbreak. The Peace Corps was established in 1961 during the Kennedy administration as a government-run volunteer program serving nations around the world.

Australian TV Journalist who met with Rita Wilson has Coronavirus

An Australian television journalist says he has COVID-19 and assumes he contracted it while meeting with actress-singer Rita Wilson in Sydney. Wilson and her husband Tom Hanks have been isolated in an Australian hospital since they were both diagnosed with the virus. Authorities said last week several contacts Hanks and Wilson had in Australia were being traced, but no other results of those efforts have been made public. Hanks had been working on a film and Wilson had concert performances in the country before they were diagnosed.