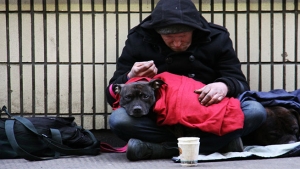 “I hope you get a sense of the seriousness we’re taking the issue of homelessness.”

As worries spread about the coronavirus confining millions of Californians to their homes, concern is growing about those who have no homes in which to shelter. California has more than 150,000 homeless people, which is the most in the nation. This specific population is considered disproportionately at risk from the COVID-19 virus both because of their lifestyle and because many have underlying health conditions that make them vulnerable.

On Wednesday, during a Facebook live broadcast, Governor Gavin Newsom said 60,000 homeless people could become infected. The governor announced he’ll spend $150 million on efforts to prevent the virus from sweeping through that population.

Two-thirds of the money will go directly to local governments to spend on homeless services and $50 million will be used by the state to purchase 1,300 travel trailers and lease hotel rooms for emergency housing for those who have tested positive for COVID-19.

Governor Newsom explained that concern is high because as the rest of the state’s residents are being told to remain socially distant and to frequently wash their hands, the homeless are living just as they did before the outbreak.

During the broadcast he said the state is already in the process of procuring hundreds of trailers and mobile home parks to, “Provide a little bit more of a secure environment [for homeless individuals] and that’s hotels”.

He continued, “We’ve identified an inventory of…901 hotels where we’re in the process…to potentially convert their hotels in the interim, for our homeless individuals” to self isolate considering they have no where else to go.

In addition to hotels and mobile homes Newsom said the state is, “Working very closely in the shelters to create distancing” between people.