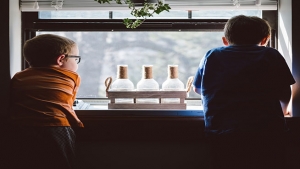 The American Red Cross announced earlier this week that it faces a severe blood shortage due to an unprecedented number of blood drive cancellations during the virus outbreak.

Mnuchin: Family of 4 Could get $3K Under Virus Relief Plan

The first federal checks to families could be $3,000 for a family of four under the White House proposal to unleash $1 trillion for the coronavirus outbreak.

That’s according to Treasury Secretary Steven Mnuchin. He said Thursday the checks would be direct deposited into people’s accounts.

The payments would be $1,000 per adult and $500 per child, Mnuchin told Fox Business Network. Congress is racing to complete the Trump administration’s $1 trillion plan to stabilize a national economy.

Late Wednesday, Trump signed into law a $100 billion-plus bill to boost testing for the virus and guarantee paid sick leave for millions of workers hit by it.

Jobless Claims Jump by 70,000 as Virus Starts to Take Hold

The number of Americans filing new claims for unemployment benefits surged last week by 70,000 to the highest level in more than two years, indicating that the effect of the coronavirus was starting to be felt in rising layoffs in the job market.

The Labor Department reported Thursday that applications for benefits, a good proxy for layoffs, rose by 70,000 to a seasonally adjusted 281,000 benefit applications last week. That was the highest weekly total since September 2, 2017, following Hurricane Harvey.

Both the one-week rise and the total number of applications were far above the levels seen over the past year as the country’s unemployment rate fell to a  half-century low of 3.5%.

Economists are predicting a surge in layoffs as efforts to contain the spreading coronavirus result in people losing jobs in a variety of industries from restaurants and bars to airlines and hotels.

American Airlines is grounding nearly half of its fleet and canceling 55,000 flights next month, according to an internal message sent to employees obtained by CNN.

The airline also expects, “Demand to fall even more before it gets better,” the message stated.

The striking numbers in an internal email from American Airlines President Robert Isom include a reduction of international flights by 75% and domestic flights by 30% in April, “With plans to reduce it even further in May.”

The message said American would park 130 wide body and 320 narrow body planes. The airline has told regulators that its core fleet includes 942 aircraft.

The airline, which is the world’s largest, also said it is continuing efforts to reduce the number of employees it pays, by expanding voluntary leave programs and “offering an early out” to employees with at least 15 years of service.

Italy has Become the Country with the Most Coronavirus-Related Deaths, Surpassing China by Registering 3,405 Dead

Italy reached the gruesome milestone on the same day the epicenter of the pandemic, Wuhan, China, recorded no new infections. Overall, China on Thursday counted 3,249 dead, 156 fewer than Italy, according to the Johns Hopkins University virus map.

Both Italy’s death toll and its new infections shot up again, adding 427 more dead and 5,322 more infections. Overall, Italy has recorded 41,035 infections, more than half of the world’s positive cases.

Italy’s health care system has been overwhelmed by the virus, and on Thursday a visiting Chinese Red Cross team criticized the failure of Italians to fully quarantine and take the national lockdown seriously.

Britain’s state-established Protestant church says church weddings should be attended only by the couple, the officiating minister and the two witnesses required by law. New guidance issued Thursday says attendees, apart from the couple, should observe as much distance as possible.

The church suggests the ceremony could be streamed online for those unable to attend, or couples could hold a public blessing once the outbreak is over. And it acknowledges that some couples may want to postpone their wedding altogether.

As the global total has raced past 200,000 cases, the number of Americans with confirmed cases of the novel coronavirus continues to pick up pace, with more than 9,400 U.S. cases as of early Thursday morning, according to data collected by Johns Hopkins University.

New York in particular announced a steep climb of 1,008 new cases since Tuesday, through Gov. Andrew M. Cuomo (D) attributed the increase to expanded testing. The state now has more confirmed cases than all but 10 countries in the world.

The new coronavirus continues to infect hundreds of Americans by the day and prompts growing layoffs, forcing health workers and government officials in the United States to brace for the worst.

Doctors are making difficult decisions about daily life, cash-strapped hospitals are struggling to order ventilators, and authorities nationwide are turning to lockdowns, mass closures and bans on large gatherings as they try to “flatten the curve.”

A Glimmer of Future Hope? No new Cases Reported in Wuhan

Last month, Wuhan was overwhelmed with thousands of new cases of coronavirus each day. But in a dramatic development that underscores just how much the pandemic has pivoted toward Europe and the United States, Chinese authorities said Wuhan and its surrounding province had no new cases to report. The news offered a rare glimmer of hope as the world battles the virus, and perhaps a lesson in the strict measures needed to halt its spread. It came as President Donald Trump likened the fight to “a war” and invoked emergency powers that allow him to compel manufacturers to deal with the pandemic.

Shares in Asia have slid further, with Japan’s benchmark failing to hold onto early gains after the latest selloff on Wall Street.  South Korea’s market sank 7% on Thursday as automakers considered closing factories to help slow the spread of the coronavirus that has infected more than 200,000 people worldwide.  Fears of a prolonged recession have been taking hold, leading investors to shift to cash in hopes of better days to come.

The Dow industrials lost more than 1,300 points on Wednesday. Even prices for investments seen as very safe, like longer-term U.S. Treasuries, have been falling as investors rush to raise cash.

2 Cruise Ships not Allowed to Disembark in Honolulu

Two cruise ships that were turned away by other ports are headed to Honolulu, but passengers won’t be allowed to disembark. Officials say there are no cases of coronavirus on either vessel. It was previously planned that passengers would disembark in Honolulu. Officials now say the ships will only refuel and resupply and then continue on to another destination. Holland America Line’s Maasdam is scheduled to arrive Friday. The Norwegian Jewel is scheduled to arrive Sunday. New measures to seal borders to reduce the spread of coronavirus have left some cruise ships stranded.

California to Spend $150 Million to Protect Homeless From Virus

As worries about the spread of the coronavirus confine millions of Californians to their homes, concern is growing about those who have no homes in which to shelter. California has more than 150,000 homeless people, the most in the nation, and that population is considered disproportionately at risk from the COVID-19 virus because of their lifestyle and because many have underlying health conditions that make them vulnerable. Gov. Gavin Newsom on Wednesday said 60,000 homeless people could become infected. The governor announced he’ll spend $150 million on efforts to prevent the virus from sweeping through that population.

First lady Melania Trump and top infectious disease specialist Anthony Fauci will take part in public service messages aimed at informing Americans about the coronavirus. The public service campaign will direct people to coronavirus.gov, which includes centralized, updated information on the crisis.  NBCUniversal, ViacomCBS and Walt Disney Television are among the companies that are taking part in the effort to inform Americans about how to protect themselves and others from the coronavirus.

The Olympic Flame is set to Arrive in Japan

The Olympic flame from Greece is set to arrive in Japan even as the opening of the Tokyo Games is in doubt. More voices are suggesting the games, scheduled to start July 24, should to be postponed or canceled because of the worldwide coronavirus pandemic. The flame will touch down Friday in northern Japan, but everything about the arrival ceremony at the Matsushima air base will be subdued. The flame is to be greeted by a few dignitaries. The flame will stay in northern Japan for almost a week until the torch relay begins officially on March 26.

There is no Division I college basketball champion this year, thanks to COVID-19, but the Associated Press conducted one final Top 25 poll, and Kansas finished on top.

The regular-season Big 12 champions, who were 28-3 when the season abruptly ended after the first day of the conference tournament last week, received 63 of 65 first-place votes from a national media panel in balloting released Wednesday.

That easily outdistanced No. 2 Gonzaga and No. 3 Dayton, each of which received a first-place vote. Florida State was fourth, while Baylor rounded out the top five.  The final rankings were based on play through March 11, when the outbreak of the coronavirus brought the sport to a halt.

What You Can Do to Keep Your Family and Yourself Healthy