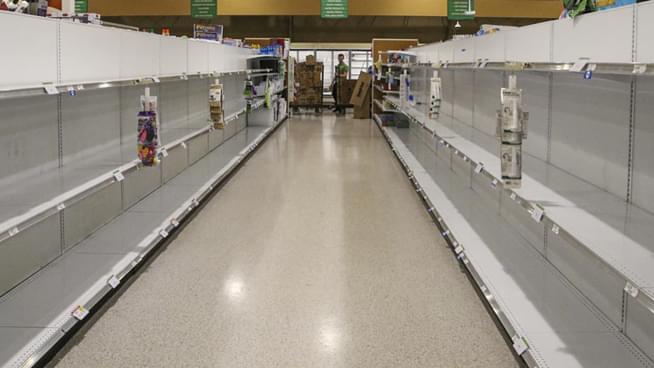 Mnunchin: We could be dealing with this until June

The U.S. lockdown to stem the spread of the coronavirus will likely last at least 10 to 12 weeks, or until early June, according to Treasury Secretary Steve Mnuchin.

Appearing on “Fox News Sunday,” Mnuchin expressed confidence that actions the Trump administration is taking will shore up the economy, and he said the plans are intended to deal with “a 10-to-12-week scenario,” adding that they can be extended if need be.

Confirmed coronavirus cases surged past 300,000 globally over the weekend, with infections in the United States climbing to more than 25,000 before the end of the day Saturday, according to tracking by Johns Hopkins University

Health officials in hard hit parts of the United States are rationing medical equipment as the federal government seeks to expand production of crucial supplies. Tens of millions in states from coast to coast remain in effective lockdown as officials order residents to stay home.

New infections and fatalities are soaring across Europe. Italy has reported more than 4,800 deaths, the most of any country. Governments around the world further tightened travel restrictions and ordered sweeping quarantines to slow the spread of the virus.

White House officials and Republican leaders have been negotiating with Schumer and key Democrats to assemble a package of spending proposals that could inject a combined $2 trillion into the U.S. economy over the coming months. Treasury Secretary Steven Mnuchin will also attend the meeting.

While Senate leaders did not meet a McConnell-imposed afternoon deadline Saturday for reaching a deal, key senators of both parties said they had made significant progress toward a potential Monday vote on the package.

U.S. textile companies, including Hanesbrands, Fruit of the Loom and American Giant, will start mass-producing protective masks for medical workers Monday under contract with the federal government.

The companies aim to begin delivering the masks in the middle of the coming week and to achieve weekly production of 10 million masks in about a month’s time, according to the National Council of Textile Organizations

The three-ply cotton masks are approved by the Food and Drug Administration for use when more sophisticated N95 masks aren’t required or are unavailable.

Columbia University’s chief surgeon has been raising alarms about the rapid surge of patients and dwindling supplies in daily letters to colleagues.

Dr. Craig Smith warned estimate of the number of coronavirus patients will continue to grow over the next month, overwhelming emergency rooms and intensive care units.  The projections show the system’s hospitals needing 700 to 934 ICU beds when the outbreak reaches its peak.

Just Friday, Smith wrote, the system saw a 50% increase in coronavirus patients, making for a total of 300 being treated and another 200 awaiting test results. He said hospitals in the system are burning through about 40,000 masks a day — about 10 times the normal amount.

The government’s top infectious disease expert says he remains hopeful the U.S. is not on the same trajectory as Italy in the coronavirus struggle.

Dr. Anthony Fauci, director of the National Institute of Allergy and Infectious Diseases, says the stringent measures being put in place in the U.S. including travel restrictions, the closing of schools and many businesses and other social distancing will go “a long way” to prevent the U.S. from becoming like Italy.

Fauci tells CBS’ “Face the Nation” that it’s hard to know exactly why Italy is “suffering so terribly” but that they did not appear to shut out as well the input of infections originating from China and other parts of the world.

He says the U.S. is “going to be hit, no doubt about it,” but it appears to be in a better position because “we have from the beginning put a kind of clamper” on the virus.

Hawaii’s governor has instituted a mandatory 14-day quarantine starting Thursday of all people traveling to the state as part of efforts to fight the spread of the coronavirus.

The order applies to returning residents as well as visitors.

“This mandate is the first of its kind in the nation,” Gov. David Ige said at a news conference in the state Capitol.  “We want this action to send the message to visitors and residents alike that we appreciate their love for Hawaii but we are asking them to postpone their visit.”

The state announced 11 new cases of people with the coronavirus, bringing Hawaii’s total to 48. Three of them are hospitalized.

Olympic athletes please with the IOC to postpone Tokyo Games

A worldwide group representing Olympic hopefuls is calling on the International Olympic Committee to postpone the Tokyo Olympics until the coronavirus pandemic is under control.

“As the world unites to limit the spread of Covid-19 virus, the IOC … must do the same,” Global Athlete said in a news release Sunday.

This show of solidarity among Olympic hopefuls adds to the dozens of individual athletes who oppose the IOC’s current stance to start the games as scheduled on July 24.

On Saturday, one of America’s best-known Olympians, hurdler and bobsledder Lolo Jones, told the AP she was hoping the IOC would respond with a postponement.

Drive-thru sites have been opening around the United States to make it quicker and safer to test people for the new coronavirus. But much like the rest of the U.S. response to the pandemic, the system has been marked by inconsistencies, delays, and shortages. Many people who have symptoms and a doctor’s order have waited hours or days for a test.

More than a week after President Donald Trump promised that states and retail stores such as Walmart and CVS would open drive-thru test centers, few sites are up and running, and they’re not yet open to the general public. Some states are leaving it to the private sector to open test locations; others are coordinating the effort through state health departments.

Patients have complained that they had to jump through cumbersome bureaucratic hoops and wait days to get tested, then wait even longer for a result. Testing centers opened in some places only to be shut down shortly afterward because of shortages of supplies and staff. And while the drive-thru test centers that have opened are generally orderly, there have been long lines at some.

New York’s governor said Sunday that he was exasperated that people are still ignoring his social distancing orders, saying he spent part of the previous day watching people clustering in groups and acting like it was just another nice spring day.

“There is a density level in New York City that is wholly inappropriate. You would think there is nothing going on. In parts of New York City, it was just a bright, sunny Saturday,” Gov. Andrew Cuomo said.

He said city officials must come up with a plan immediately to prevent people from congregating in parks or elsewhere, saying it was a matter of life and death.

Nearly 2,000 people have been hospitalized in the state with the virus and 114 have died, Cuomo said. More than 15,000 have tested positive statewide, including 9,000 in New York City.

The coronavirus pandemic is leading to information overload for many people, often making it difficult to separate fact from fiction and rumor from deliberate efforts to mislead.

Already, text messages predicting a nationwide lockdown have circulated, along with social media posts telling people that one way to get tested for the virus is by donating blood or warning that mosquitoes can carry it. All are untrue. Such falsehoods can endanger public health, sow confusion and fear, and prevent important information from reaching people during a crisis. The Associated Press has debunked many such claims, including one about bananas supposedly preventing people from catching the virus and another on “Harry Potter” actor Daniel Radcliffe testing positive.

COVID-19, the illness caused by the virus, has stricken thousands across the globe but usually presents only mild or moderate symptoms, such as fever and cough. For older adults and people with other health problems, it can cause complications or sometimes death. Most people recover.

“Senator Rand Paul has tested positive for COVID-19. He is feeling fine and is in quarantine. He is asymptomatic and was tested out of an abundance of caution due to his extensive travel and events. He was not aware of any direct contact with any infected person.

He expects to be back in the Senate after his quarantine period ends and will continue to work for the people of Kentucky at this difficult time. Ten days ago, our D.C. office began operating remotely, hence virtually no staff has had contact with Senator Rand Paul.”

The 79-year-old Domingo said in a post on his personal Facebook account Sunday that “I feel it is my moral duty to announce to you that I have tested positive.”

The tenor says he and his family are in self-isolation and that he is feeling well despite having fever and a cough.

“I beg everyone to be extremely careful, follow the basic guidelines by washing your hands frequently, keeping at least a 6 foot distance from others, doing everything you can to stop the virus from spreading and please above all stay home if you can!” he said.

The virus has been slow to reach Africa but has now spread to at least 43 of the continent’s 54 countries, with more than 1,100 cases confirmed. In response many African countries are imposing restrictions.