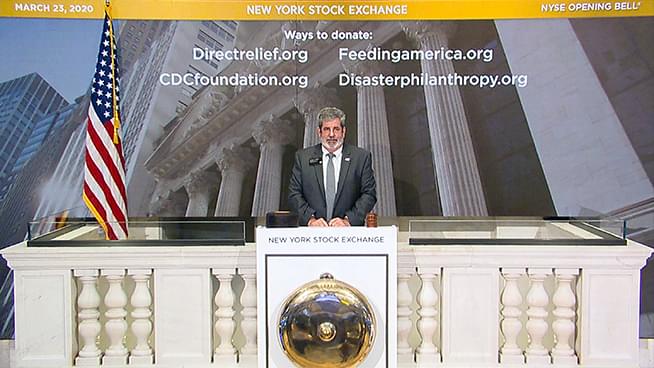 Stocks fall, despite Fed aid as traders wait for Congress

Stocks are down roughly 1% in tumultuous trading on Wall Street as investors wait for Democrats and Republicans to settle their differences on a rescue package for the economy. Earlier, markets got a bump higher following the Federal Reserve’s latest massive announcement of support.

The Fed said it would buy as much government debt as needed to help markets operate smoothly. But the gains quickly vanished. The S&P 500 at one point was down nearly 5%. Markets are likely to remain volatile as long as the coronavirus outbreak accelerates.

Until then, investors are looking for both central banks and governments to do their parts to support the economy.

Fed to buy unlimited government debt and lend to businesses

In its boldest effort to protect the U.S. economy from the coronavirus, the Federal Reserve says it will buy as much government debt as it deems necessary and will also begin lending to small and large businesses and local governments to help them weather the crisis.

The Fed’s announcement removes any dollar limits from its plans to support the flow of credit through an economy that has been ravaged by the viral outbreak.

The central bank’s all-out effort has now gone beyond even the extraordinary drive it made to rescue the economy from the 2008 financial crisis. “The coronavirus pandemic is causing tremendous hardship across the United States and around the world,” the Fed said in a statement.

Italy’s day-to-day increases of new cases of COVID-19 have dropped considerably compared to figures from a day earlier.

According to data released on Monday by Italy’s Civil Protection agency, new cases rose from a day earlier by 4,789 cases.

That’s nearly 700 fewer new cases that were reported in the day’s previous day-to-day increases. Italy has been anxious to see daily new caseloads drop as it health system struggles to keep up with the world’s largest outbreak after China.

Day-to-day increase in deaths also were fewer than the day before: 602 compared to 651 reported by authorities on Sunday.

Health authorities have said it will need a few more days to see if a positive trend holds, including in northern Lombardy region, which is the nation’s worst stricken region.

The latest numbers come nearly two weeks into a national lock-down in a desperate bid to contain Europe’s largest outbreak.

The city has emerged as a worldwide hotspot for the outbreak, with more than 12,000 known cases. Cuomo said the swift climb in numbers also is due to aggressive testing. The state is now testing 16,000 people a day, the governor said.

There have been 157 deaths in New York state. And there have been more than 2,500 hospitalizations in the state, with 621 ICU patients. State and city officials expecting a wave of more patients are scrambling to add more hospital beds.

Exceptions are allowed for workers in essential industries or to go outside for groceries and medicine.

Holcomb’s order mirrors orders in adjacent states and runs until April 6 but could be extended if needed. It directs the state’s 6.8 million residents to stay at home.

Holcomb said that the next two weeks “are critical if we are to slow the spread of COVID-19.”

Maryland Gov. Larry Hogan has ordered nonessential businesses to close. The governor’s order takes effect Monday at 5 p.m. Hogan also announced that stronger enforcement actions will be taken against people who gather in groups of more than 10 people.

The governor also announced a variety of relief initiatives to help small businesses and workers.

One of the initiatives is a $175 million program to help small businesses and their employees. Hogan discussed plans to turn the Baltimore Convention Center into an alternate care site. The governor also announced a pilot coronavirus drive-thru screening location at FedEx Field in Landover, Maryland.

Gov. Gretchen Whitmer on Monday issued a statewide stay-at-home order to curb the spread of the coronavirus, with exemptions for certain workers, outdoor exercise and essential trips to places like the grocery.

Whitmer warned of dire results akin to those seen in Italy if people do not follow her order. She said more than 1 million Michigan residents could need a hospital bed if the virus is not controlled.

The technology company said Sunday that it is working with the White House and the U.S. Department of Energy to make its computing power more accessible to researchers tackling the coronavirus.

A group that includes universities and other technology companies will evaluate proposals from researchers around the world and decide which ones will get access to the supercomputer.

Separately, 3M said that it has doubled the number of face masks it makes to 100 million per month in its plants around the world.

It is working to double that amount again in the next 12 months.

The Transportation Security Administration is reporting that 24 screening officers at 10 airports around the country have now tested positive for the coronavirus.

It also says an additional five employees who have limited interaction with travelers have also tested positive. Those numbers from Monday are up from just seven employees a week earlier.

TSA says security lanes remain open there are fewer passenger than have ever been counted by the agency at U.S. airports.

The former Democratic presidential candidate said in a statement that Bessler began feeling sick when she was in Minnesota and he was in Washington, D.C., and that he immediately quarantined himself. She said he sought a test and chest X-ray after he began coughing up blood, and was checked into a Virginia hospital with “very low oxygen levels, which really haven’t improved.”

She said he now has pneumonia and is on oxygen but not a ventilator. Klobuchar said her doctor had advised her not to get a test.

“One of the hardest things about this disease is he’s in the hospital today, he’s been in there for a few days, and I can’t even be by his side,” Klobuchar said during a teleconference to discuss legislation Monday.

For most people, the coronavirus causes mild or moderate symptoms, such as fever and cough. For some, especially older adults and people with existing health problems, it can cause more severe illness, including pneumonia.

Klobuchar said it took five days for Bessler to be tested, noting that such delays are a problem facing many.

U.N. Secretary-General Antonio Guterres called Monday for an immediate cease-fire in conflicts around the world to tackle the coronavirus pandemic.

The U.N. chief said: “It is time to put armed conflict on lock-down and focus together on the true fight of our lives.”

Guterres said the world faces “a common enemy — COVID-19” which doesn’t care “about nationality or ethnicity, faction or faith.”

He said people caught in armed conflicts, which are raging around the world, are among the most vulnerable and “are also at the highest risk of suffering devastating losses from COVID-19.”

IOC Member says Summer Olympics likely to be postponed until 2021

Veteran International Olympic Committee member Dick Pound told USA TODAY Sports Monday afternoon that the 2020 Tokyo Olympic Games are going to be postponed, likely to 2021, with the details to be worked out in the next four weeks.

“On the basis of the information the IOC has, postponement has been decided,” Pound said in a phone interview. “The parameters going forward have not been determined, but the Games are not going to start on July 24, that much I know.”

Pound, a Canadian who has been one of the most influential members of the IOC for decades, said he believes the IOC will announce its next steps soon.

“It will come in stages,” he said. “We will postpone this and begin to deal with all the ramifications of moving this, which are immense.”

Fitness enthusiasts think outside the gym during coronavirus

Gyms, yoga studios and CrossFit centers around the country are fueling the drive to stay active by offering online classes, some free of charge, or extending trial periods for at-home workouts.

Studio owners and fitness instructors are having to adjust too as they make the shift to teaching online. The Coalition of Health and Fitness Leaders, a group of fitness, nutrition and wellness industry representatives recently formed in response to the new coronavirus, hosted an online panel Thursday to provide guidance for instructors.

Countless people around the country who have been cooped up inside as their companies mandate work-at-home policies and their fitness centers shut down are getting creative with their workout routines.

Many are turning to online classes, grabbing bleach bottles as makeshift weights, or taking cues from YouTube challenges showing how to do crunches with furniture or turn a kitchen floor into a treadmill by soaping up the tiling.

“While we advise that you cannot use our standard vodka product as a hand sanitizer, our team at the distillery has been working hard to get all of the pieces in place to begin production on a hand sanitizer that adheres to industry and governmental guidance,” the company said in a statement.

“While we don’t have all of the details quite yet, we do know we will be giving it away for free to our community and those most in need.”

They’re not the first company to switch gear.

Earlier this month, luxury goods conglomerate LVMH, the parent company of Christian Dior, Guerlain and Givenchy, said it would help French health authorities by manufacturing hand sanitizer and providing it to them for free.

LVMH said it would use all the production facilities of its perfumes and cosmetics brands to produce large quantities of hydro alcoholic gel, or hand sanitizer.