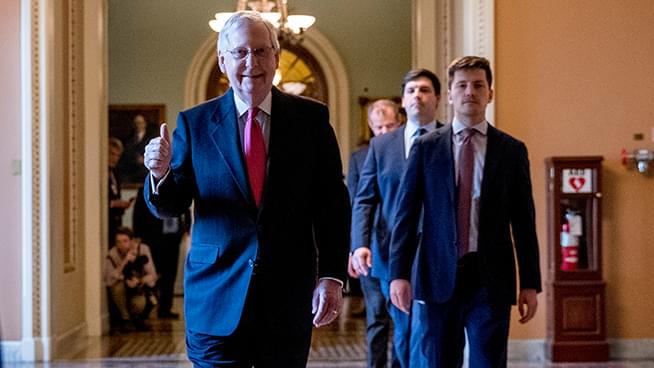 Senate Majority Leader Mitch McConnell of Ky. gives a thumbs up as he leaves the Senate chamber on Capitol Hill in Washington, Wednesday, March 25, 2020, where a deal has been reached on a coronavirus bill. The 2 trillion dollar stimulus bill is expected to be voted on in the Senate Wednesday. (AP Photo/Andrew Harnik).

The White House and Senate leaders of both political parties have reached agreement on a $2 trillion measure to rush aid to businesses, workers and a health care system slammed by the coronavirus pandemic. It’s the largest economic rescue measure in history. The Senate is likely to pass the measure Wednesday afternoon.

In the House, leaders hope to clear the measure for President Donald Trump’s signature by a voice vote without having to call lawmakers back to Washington, but that may prove challenging. The bill is sure to be opposed by some conservatives upset at its cost and scope. Some House liberals are restless as well.

New unemployment benefit claims are rising to levels unseen in recent U.S. history as a result of coronavirus concerns. States have reported receiving tens of thousands of new claims for unemployment insurance last week. Officials figures are to be released Thursday, and some economists project that new claims could reach 3 million nationwide.

Some laid-off workers have encountered delays in filing claims because of overloaded websites and phone systems. Some states are warning that it could take longer than the normal two to three weeks to receive unemployment payments because of the sudden surge in claims.

New York Gov. Andrew Cuomo says the number of people hospitalized with COVID-19 in the state has climbed to 3,800, with close to 900 in intensive care.

New York officials are keeping a close eye on already-stressed hospitals as the number of cases is projected to rise for perhaps three more weeks.

Cuomo said Wednesday that as many as 140,000 hospital beds may be needed in a state with 53,000. The state has more than 30,000 confirmed cases and 285 deaths. The nation-high figures are driven mostly by New York City.

Egg prices are skyrocketing because of coronavirus panic shopping

Americans are stockpiling eggs during the coronavirus crisis as they cook more meals at home. That’s leading to supply shortages and a spike in prices at some supermarkets.

Egg sales increased 44% for the week ending on March 14 compared with a year ago, according to the most recent Nielsen data. Walmart (WMT) and other big grocers have implemented limits in recent days on purchases of eggs, cleaning supplies and other products that are in high demand from customers.

“Consumers are panic shopping and, much like we see ahead of a snow storm, they are purchasing staple items (milk, bread, toilet paper, and eggs). Except obviously this is on a national scale and for a much longer period of time,” said Brian Moscogiuri, director and egg analyst at Urner Barry, a commodity market research firm.

Retailers are ordering up to six times their normal egg volumes and have depleted the supply that producers were beginning to build for Easter, he said. “Buyers have paid huge premiums to secure loads.”

“It is with deep sorrow that we inform you of the passing away of Chef Floyd Cardoz,” according to a statement from Hunger Inc. Hospitality, where Cardoz was the culinary director.

Cardoz tested positive for Covid-19 on March 18 and was being treated for it at Mountainside Medical Center in New Jersey, the statement said.

He was the executive chef at Tabla, the pioneering modern Indian restaurant he opened with Danny Meyer in 1998, earning him multiple accolades and critical acclaim. He later helmed Meyer’s North End Grill, while he competed and won on Bravo’s third season of “Top Chef Masters.”

He later opened Pao Walla in New York City’s Soho neighborhood and followed that up with Bombay Bread Bar, which closed last year.

Prince Charles, the heir to the British throne, has tested positive for the new coronavirus. The prince’s Clarence House office says the 71-year-old is showing mild symptoms of COVID-19 and is self-isolating at a royal estate in Scotland. It says his wife Camilla has tested negative.

The palace says Charles “has been displaying mild symptoms but otherwise remains in good health and has been working from home throughout the last few days as usual.” Buckingham Palace said that 93-year-old Queen Elizabeth II is in good health. It said that she remains at her home in Windsor with the 98-year-old Duke of Edinburgh.

Elton John is hosting a “living room” concert aimed at bolstering American spirits during the coronavirus crisis and saluting those countering it. The event was announced Wednesday by iHeartMedia and Fox. Alicia Keys, Billie Eilish, Mariah Carey, the Backstreet Boys, Tim McGraw, and Billie Joe Armstrong are scheduled to take part in the concert airing at 9-10 p.m. Eastern Sunday on Fox TV and on iHeartMedia radio stations.

The artists will be filmed with cell phones, cameras and audio equipment for safety reasons. Viewers will be asked to support the charitable organizations Feeding America and First Responders Children’s Foundation.

Even though the U.S. Census Bureau had trouble finding workers for its massive address-verification work late last summer, it managed to complete the job under budget due to better-than-expected productivity of its staffers.

A new report from the Government Accountability Office says the 32,000 workers sent out across the U.S. to double-check addresses ahead of the start of the 2020 census verified almost 20 addresses an hour compared to the expected goal of almost 16 addresses an hour.

The Census Bureau credited the increased efficiency to new technology and automation.

Canada is imposing mandatory self-isolation for those returning to Canada under the Quarantine Act. Health Minister Patty Hajdu said on Twitter that the government is making it mandatory to better protect Canada’s most vulnerable.  Deputy Prime Minister Chrystia Freeland says it will begin at midnight Wednesday and the requirement will be for 14 days.

Freeland said penalties will be announced later Wednesday. More than a million Canadians and permanent residents returned to Canada between March 14 to March 20, according to Canada Border Services. The mandatory quarantine will not apply to truck drivers and health care workers crossing the border.

Toronto Blue Jays general manager Ross Atkins is pitching an idea to help big league teams squeeze in more games once the season resumes. Atkins is floating the prospect of playing seven-inning doubleheaders. Those have long been a staple of minor league baseball. Atkins says seven-inning twin bills could add more games in a condensed season without exhausting pitching staff.

Opening day has been postponed until at least mid-May because of the coronavirus pandemic. The Blue Jays were set to begin the 2020 season at home against the Boston Red Sox on Thursday afternoon.

The NHL’s chief medical officer expects the coronavirus pandemic to get worse before it gets better.

She says the league is thankful only two players have tested positive for COVID-19 so far and its hopeful weeks of isolation will prevent more from contracting the virus. Players and staff have been told to self-quarantine until at least April 4.

There is no timeline for when players might be able to start working out in small groups or report to team training facilities. Meeuwisse says the trajectory of the coronavirus outbreak in the U.S. and Canada will determine when that might be possible.

Varying recommendations and lockdown regulations across the league’s 31 markets could impact how the NHL proceeds. Meeuwisse and deputy commissioner Bill Daly are still unsure whether fans would be allowed in for potential games when they resume.