Though almost as iconic as the Golden Gate Bridge now, Sutro Tower’s inception was complex and unwelcome at first. Find out more about your big red and white neighbor, and enjoy the view from this San Francisco icon as we ascend its heights.

Taking it’s name from the celebrated Sutro family, it was constructed in 1973 in an effort to strengthen local broadcasts. The expanding population of Bay Area had sprawled it’s way down the peninsula and over hills, making the towers at the time inadequate.

“They needed a taller tower to reach all those new houses out there,” said David Hyams, the Director of Communications for Sutro Tower. “So the TV stations agreed to build what they call a ‘tall tower'”

The site was debated though, and the prime candidates were Twin Peaks and Mt. San Bruno. Eventually the San Bruno site was scrapped because of it’s proximity to SFO and the problems it would cause to their flight paths.

The new site would actually be set to be built on a mansion, dubbed “La Avanzada”, owned by the grandson of Adloph Sutro which was sold to ABC in 1948. La Avanzada housed a much smaller antenna and studio that was at the time the home of KGO Television. 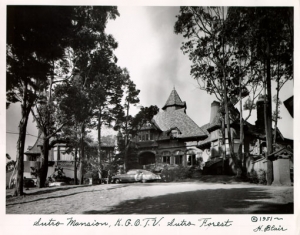 In 1971 construction began on what would stand as the tallest structure (977 ft) in San Francisco until the completion of the Salesforce Tower in 2017. The impressive height is almost doubled (1,811 ft) due to it’s location.

However, the iconic visual of it’s tallest arms reaching through the heavy fog we’re not shared by the residents of San Francisco at the time. Locals thought it a blemish on their beautiful city. The tower even originally lit up at night to showcase it’s staggering size though after public outcry those were quickly taken away. 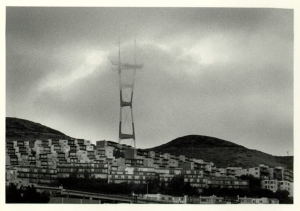 In 2019 the FCC started “spectrum repacking” to consolidate public broadcast signals and make room for more wireless services. Part of this journey has one of the three spires at Sutro temporarily disassembled so that this process may begin in the San Francisco Bay Area. This is a concerted effort since transferring signals must be staggered, creating a “stepping stone” effect. This also means that this project must be done in conjunction with other repacking efforts.

One of the rescan dates has already passed but a secondary scan is coming on April 29th, 2020.

“TV Viewers who get their television over the air or through a converter box will need to rescan,” said Hyams. “If you get it from cable or satellite they’ll take care of it for you.”