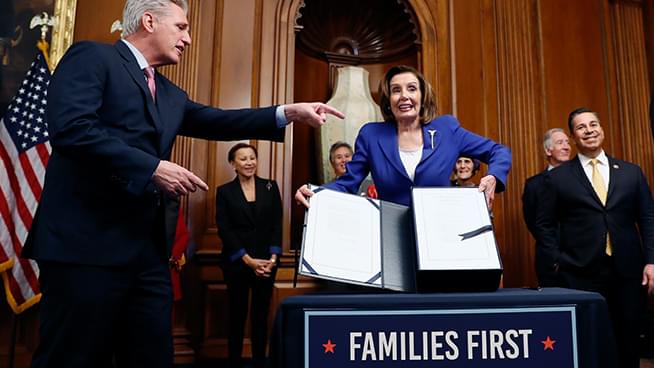 House Speaker Nancy Pelosi of Calif., accompanied by House Minority Leader Kevin McCarthy of Calif., left, and other legislators, participate in a bill enrollment ceremony for the Coronavirus Aid, Relief, and Economic Security (CARES) Act, after it passed in the House, on Capitol Hill, Friday, March 27, 2020 in Washington. The $2.2 trillion package will head to Trump’s desk for his signature. (AP Photo/Andrew Harnik).

The House has approved a $2.2 trillion rescue package, rushing it to President Donald Trump for his signature. The measure tosses a life preserver to a U.S. economy and health care system left flailing by the coronavirus pandemic.

The House approved the sweeping measure by a voice vote, as strong majorities of both parties lined up behind the most colossal economic relief bill in the nation’s history.

It will ship payments of up to $1,200 to millions of Americans, bolster unemployment benefits, and offer loans, grants and tax breaks to businesses large and small. It also will flush billions more to states, local governments and the nation’s all but overwhelmed health care system.

The United States continues to lead the world in coronavirus infections even after a spike of new cases reported in Italy.

According to a running tally by Johns Hopkins University, the U.S. has more than 92,000 cases of the virus. Italy reported a total of more than 86,000 infections on Friday.

Worldwide, more than 560,000 people have contracted the virus and more than 127,000 have recovered, according to Johns Hopkins.

Stress-baking and hoarding has led to a retail egg shortage

Any amount of heckling and cajoling will not change that. Americans are stockpiling eggs, and it’s about a week from peak pre-Easter egg buying.

Experts say this is an on-shelf shortage, that there are enough eggs in the works. But if Americans — now cooped up and stress-baking for their families — continue to markedly change their cooking behaviors, American egg producers will have to grow their flocks. And that takes time: It takes 22 weeks for a chick to become a laying hen.

According to Nielsen data, sales of eggs in shells went up 44 percent for the week ending March 14 compared with a year ago, with retailers ordering six times normal volume. Wholesale egg prices have risen 180 percent since the beginning of March, and Google searches for baking recipes without eggs have spiked.

As the world faces a global shortage of medical equipment, the World Health Organization is planning to ship personal protective equipment to doctors in 60 more countries, WHO Director-General Tedros Adhanom Ghebreyesus said during a media briefing in Geneva today.

“The chronic global shortage of personal protective equipment is now one of the most urgent threats to our collective ability to save lives,” Tedros said Friday.

“WHO has shipped almost 2 million individual items of protective gear to 74 countries that need it most and we’re preparing to send a similar amount to a further 60 countries, but much more is needed,” Tedros said. “The problem can only be solved with international cooperation and solidarity.”

IDPH is asking for anyone who can donate gloves, masks, and gowns to protect health care workers to reach out to the state to arrange for a donation.

Gov. J.B. Pritzker said during a news conference Thursday that Illinois is competing with other states, the federal government and other countries in the marketplace to obtain more PPE.

Pritzker called on President Trump to enforce the Defense Protection Act executive order to make it easier for states to produce and purchase more PPE.

Cuomo says his plea for 30,000 more ventilators is based on data and science

New York Gov. Andrew Cuomo appeared to respond to comments from the President that the state may not need as many ventilators as the governor has been asking for this week.

Cuomo didn’t directly call out President Trump, but he said, “Everyone is entitled to an opinion” when asked about pushback on his projection that New York needs 30,000 more ventilators.

He added, “I don’t operate on opinion.”

On the 30,000 additional ventilators he believes New York needs, Cuomo said, “that’s what the data and the science said.” He noted that scientists have told him the state may need 140,000 hospital beds and as many as 40,000 ventilators at the apex of the outbreak.

Cuomo said he will “make the decisions based on the data and the science” and “the numbers say you may need 30,000” additional ventilators.

During an interview with Sean Hannity on Thursday, Trump appeared to downplay Cuomo’s request for tens of thousands of more ventilators for his state. “I don’t believe you need 40,000 or 30,000 ventilators,” Trump told Hannity, an apparent reference to New York.

Apple on Friday released a website and an iOS app that allows users to screen themselves for coronavirus symptoms, marking another response to the pandemic by a major tech platform.

Both tools were developed in partnership with the Centers for Disease Control and Prevention, as well as the White House’s Coronavirus Task Force and the Federal Emergency Management Agency, Apple said in a statement to CNN. The app and website include a questionnaire and information about the novel coronavirus.

Apple said it will not collect or store users’ answers to the questionnaire, though it will collect anonymous information about usage of the tools.

The NCAA Division I Council is scheduled to vote on Monday whether to provide another year of eligibility to spring sport athletes. That includes sports such as baseball, softball and lacrosse. Those players had their seasons wiped out by the coronavirus pandemic.

Providing similar relief to winter sport athletes, such as basketball and hockey players and wrestlers, will also be considered. There does not appear to be support for that.

Sorry parents, ‘Baby Shark’ is making a comeback — for a good cause.

Pinkfong’s “Baby Shark” — that jingle earworm that every toddler seems to know — has been reworked to teach good hygiene to combat COVID-19.

The company has debuted the “Wash Your Hands With Baby Shark” video and started a dance challenge to encourage families to upload videos of their children washing hands to the song.

Pinkfong uploaded its original version of “Baby Shark” with an accompanying dance and colorful cartoon video to YouTube in June 2016. It has now been viewed over 4.6 billion times, making it one of YouTube’s top five watched videos of all time.