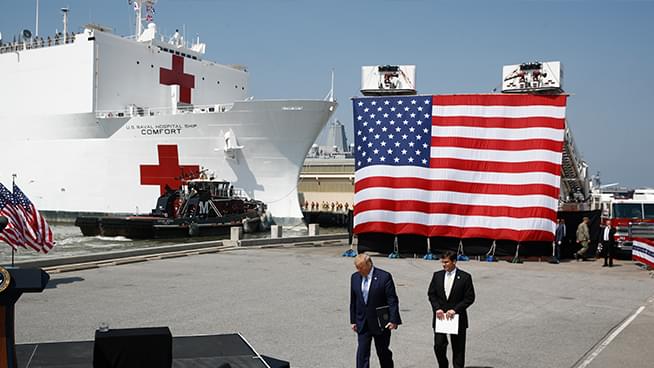 The president professing his “profound gratitude” to the crew of the USNS Comfort as they head to NYC to help with urgent care patients…NOT for Coronavirus patients. Those who have the virus will be at hospitals on land. The goal is to open up beds for those with the virus

The president said work that was supposed to take 4 weeks to finish up the ship was done in just 4 days and will begin treating patients on Tuesday.

Trump says the sister ship the USNS Mercy arrived in Los Angeles, California yesterday.  The ships have 12 ORs, 1,000 hospital beds, 4 ERs, a Pharmacy and more.  “We will stop at nothing to protect the health of NY’ers and the health of the people of our country in their hour of need”, Trump said.

The President also says he’s now “considering” quarantine of the NY metro area, including NJ and Connecticut.  The move, if it happens, wouldn’t impact truckers or trade.  Democratic Gov. Andrews Cuomo of New York says he “doesn’t even know what that means,” and says the subject never came up in a conversation he had with Trump earlier Saturday. Trump says it would be for a “short period of time if we do it at all.”

According to the latest data from Johns Hopkins University, the United States now has more than 100,000 confirmed cases of COVID-19, including over 44,000 cases in New York, 8,800 in New Jersey and 4,500 in California. The U.S. is now the epicenter of the pandemic, which has resulted in over 26,000 deaths worldwide.

“I don’t think it’s wise to be bringing a lot of people to one location to vote,” Cuomo, a Democrat, said Saturday during a news conference. He also extended the state’s tax filing deadline to July 15.

The US surpassed Italy and China this week to become the country with the most coronavirus cases in the world with more than 102,963 known cases, according to CNN’s tally. At least 1,590 people have died in the US, with at least 402 of those deaths reported on Friday alone.

The declaration announced by the White House on Saturday follows a back-and-forth between Trump and Gov. Gretchen Whitmer, who has criticized the Trump administration for its slow response to the pandemic, saying “we cannot weather this alone.”

The U.S. surgeon general said Friday that Detroit, a national “hot spot” for cases of the new coronavirus, will worsen next week. More than 3,600 people in Michigan were confirmed to have COVID-19 Friday. At least 92 have died, most from the three counties in the Detroit area, according to state officials.

Detroit has recorded 28 deaths and 1,166 cases, according to the city’s health department.

Detroit Doctor Worries that city is another hotspot for the virus.

“At this time, the trajectory of Detroit is unfortunately even more steep than that of New York,” Chopra said. “This is off the charts,” says Dr. Teena Chopra, the Medical Director of Infection Prevention and Hospital Epidemiology at the Detroit Medical Center

Like many health systems across Detroit, the DMC says it has been “seriously impacted” by resource and capacity issues related to COVID-19 patients. It is working to mitigate capacity issues by shuffling patients from hospital to hospital within its system.

“It seems like a tsunami,” Chopra said. “That’s how it feels on the front lines.”

Chopra says Detroit is in a unique situation because it has a high-risk population, battling numerous underlying health issues already. Chopra, who has worked in Detroit for more than 15 years, says many patients have ailments like asthma, heart disease, diabetes and hypertension which could be causing a higher chance of COVID-19 transmissions and infections.

Kansas Gov. Laura Kelly has issued a statewide order for people to stay at home as part the effort to slow the spread of the coronavirus.

Kansas has had more than 200 cases of the virus, including four people who died. Kansas is now one of nearly two dozen states to issue stay-at-home orders. The Kansas order starts Monday. It lasts through April 19.

The donations can be dropped off at Salvation Army drop boxes next to New Orleans Fire Department stations. Items being accepted include masks, gloves, disposable medical gowns, goggles and face shields.

“Like many places around the world, orders of PPE equipment made back in November 2019 have yet to be filled and our supply is running low. Any additional equipment the public can donate at this time will help keep our first responders safe and out on the streets,” New Orleans Homeland Security and Emergency Preparedness Director Collin Arnold said.

New Orleans is one of the nation’s hot spots for coronavirus.

Italy’s COVID-19 deaths are down slightly from the previous day.

Civil Protection officials said there were 889 deaths in a 24-hour period ending Saturday evening in the country, where intensive care units have been overwhelmed at the heart of the outbreak in the north. That compares to 969 a day earlier, which was a one-day high in the country which has the world’s highest number of deaths of persons with confirmed cases of the coronavirus.

The day-to-day rise in new cases was just under 6,000, about the same as the previous day’s figure. Overall, Italy has at least 92,472 cases of COVID-19 and days ago surpassed the total of China, where the outbreak began in early 2020.

The current national lock-down decree expires on April 3, but health experts have said the need to try to contain contagion in the outbreak will likely last weeks beyond that.

The National Rifle Association and other gun owner groups are suing California Gov. Gavin Newsom and other officials after gun stores were deemed non-essential businesses and ordered to close during a statewide stay-at-home order to curb coronavirus infections.

The lawsuit seeks to have gun stores declared essential businesses. It was filed Friday by the NRA, a Los Angeles-area gun retailer, and other gun owner groups in the U.S. District Court for the Central District of California.

The suit came after Villanueva announced Thursday that due to Newsom’s executive order, all gun and ammunition stores in Los Angeles County are not considered essential businesses and must close to the general public.

Newsom’s order allows grocery stores, gas stations, pharmacies and other businesses to remain open during the stay-at-home order, but forces the closure of others considered non-essential.

The lawsuit filed by the NRA and other gun owner groups claims the executive order violates gun owners of their Second Amendment rights.

An upstate New York doughnut shop is featuring the likeness of the doctor leading the country’s battle with coronavirus on its sweet treats.

The exclusive treats have been selling “like crazy” since the store put them on display Monday, according to Nick Semeraro, franchisee of the café.

The shop’s decision was inspired by the 79-year-old doctor’s straightforward communication style and calm demeanor while he’s been advising millions of Americans amid a pandemic.

The infectious disease expert has served as an adviser to every president since Ronald Reagan and President Donald Trump has coined him as a star on his administration’s coronavirus task force.

Therefore, putting Fauci’s face smack down in the middle of a doughnut felt like an obvious choice for Semeraro.

“We’re watching the news like everyone else,” Semeraro told the Democrat & Chronicle on Thursday. “He’s on TV giving us the facts; you’ve got to respect that. We’re bipartisan, we stay neutral, but you’ve got to give credit where credit’s due.”

In addition, the shop hopes this new addition to their menu brings “light to a humbling experience,” Semeraro said, and some cheer to customers, “even if it’s just while you’re wolfing down that doughnut.”