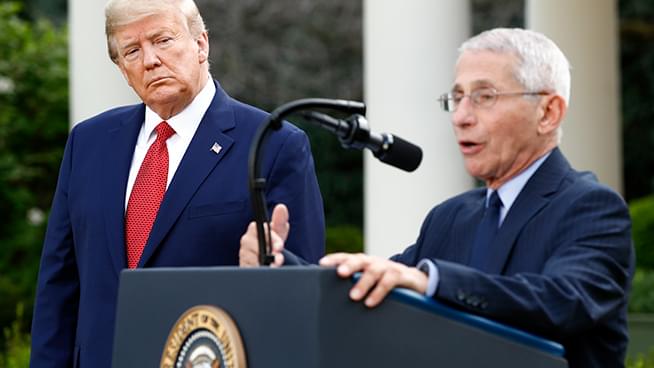 President Donald Trump listens as Dr. Anthony Fauci, director of the National Institute of Allergy and Infectious Diseases, speaks during a coronavirus task force briefing in the Rose Garden of the White House, Sunday, March 29, 2020, in Washington. (AP Photo/Patrick Semansky).

The U.S. government’s foremost infection disease expert, Dr. Anthony Fauci, says the U.S. will certainly have “millions of cases” of COVID-19 and more than 100,000 deaths.

As the U.S. tops the world in reported infections from the new coronavirus, the director of the National Institute of Allergy and Infectious Diseases predicts 100,000-200,000 deaths from the outbreak in the U.S.

Fauci was speaking to CNN’s “State of the Union” as the federal government is discussing rolling back guidelines on social distancing in areas that have not been hard-hit by the outbreak.

Fauci says he would only support the rollback in lesser-impacted areas if there is enhanced availability of testing in place to monitor those areas. He acknowledged “it’s a little iffy there” right now.

The state accounts for more than 40% of coronavirus deaths in the U.S.

The number of disease-related deaths in the state jumped Sunday to 965 from 728 the day before, Gov. Andrew Cuomo said. The vast majority have been in New York City. Figures released Sunday morning showed 678 coronavirus deaths in the city, which continues to be the epicenter of the pandemic in the U.S.

Meanwhile, new data is showing which parts of the city are being hit the hardest by disease and that nearly a quarter of the people who’ve died of coronavirus in the state were nursing home residents.

Edwards said on ABC’s “This Week” that Louisiana is on a trajectory to overwhelm its health care system and will need more ventilators by the end of the first week of April. He says the state will be out of hospital beds several days into April.

He said they have orders out for more than 12,000 ventilators through the national stockpile and private vendors, but Louisiana so far has only been able to get 192.

President Donald Trump considered and then rejected ordering a quarantine for residents of the state and neighboring New Jersey and Connecticut amid the coronavirus outbreak. Instead, he announced in a tweet late Saturday that he’s asked governors of the states to oversee a “strong” travel advisory, after New York Gov. Andrew Cuomo said that roping off states would be illegal, economically catastrophic, and shortsighted when other parts of the U.S. are seeing cases rise, too.

An advisory by the Centers for Disease Control  urged residents of New York, New Jersey and Connecticut to “refrain from nonessential domestic travel for 14 days effective immediately,” though the three states issued stay-home orders to the same effect on March 20.

Two state prison employees have tested positive for the coronavirus in South Carolina, but no inmates have been confirmed with the illness

The latest employee to get COVID-19 was a behavioral health employee who visits prisons and is based in offices in Columbia, the Corrections Department said.

The employee went into isolation on March 19 and last visited prisons on March 10 and 17, but did not have contact with any inmates, the agency said in a statement Saturday night.

The officer worked in a special housing unit where 16 prisoners each stay in individual cells. They are all being isolated and none have shown COVID-19 symptoms, prison officials said.

Early Sunday also brought another stay-at-home order into effect. Columbia Mayor Steve Benjamin went ahead with the order closing all nonessential businesses, like gyms and hair salons, and banning all gatherings, including private ones.

State Attorney General Alan Wilson’s office issued an opinion Friday saying local stay-at-home orders were illegal because only the governor had the power to issue one in a state of emergency like South Carolina faces with COVID-19.

Benjamin said that opinion, which has no legal standing until argued in court, is wrong. Other local governments with similar orders like Charleston, Folly Beach and the Isle of Palms also ignored the order.

Gov, Henry McMaster has given no indication if he will challenge the governments challenging him.

A spokesman for Wilson said the Attorney General’s Office can only interpret what it thinks the law says.

“We think cities should do what they think is in the best interests of their citizens and is within the law. Our opinion was to let cities know what the law says and what the consequences could be if they don’t follow that law,” spokesman Robert Kittle said in an email.

President Donald Trump has added Connecticut and Oregon to the list of states where a disaster has been declared due to the coronavirus. A disaster declaration makes a state eligible for federal assistance to supplement state and local efforts to respond to the pandemic.

The addition of Connecticut and Oregon brings the list of states where a disaster has been declared to 18, along with Guam and Puerto Rico.

Governor Phil Murphy noted it’s essentially already in effect because people are getting the message to stay home.

Murphy said on ABC’s “This Week” that New Jersey will take stronger steps to enforce the stay-at-home order if needed.

Murphy said New Jersey is getting some of the PPEs it needs but is still short of ventilators. He said he had a “very specific conversation” with the White House about ventilators and made clear receiving more is the state’s top priority.

U.S. Treasury Secretary Steven Mnuchin says a decision whether to reopen the nation back for business as early as Easter will be a health decision not an economic one.

Mnunchin acknowledges surging unemployment numbers and declining GDP as 1 in 3 Americans remain under government orders to stay at home to slow the coronavirus that has killed over 2,000 Americans.

But he says President Donald Trump’s top objective is the health of the American public.

Mnuchin tells “Fox News Sunday” and CBS’ “Face the Nation” that his own top focus is getting stimulus money from the just-passed $2.2 trillion aid package from Congress immediately into the hands of workers and businesses.

He said American workers will get direct deposits of money in three weeks, while a federal program aimed at helping half the workforce by encouraging small business to take out loans to hire back their workers for eight weeks will be up and running by Friday.

He said the stimulus package should help keep the economy and workers afloat for 10 weeks, and if more time is needed to stem the coronavirus, the administration will assess what else is needed at that time.

As the coronavirus rages across the United States, mainly in large urban areas, more than a third of U.S. counties have yet to report a single positive test result for COVID-19 infections, an analysis by The Associated Press shows.

Data compiled by Johns Hopkins University shows that 1,297 counties have no confirmed cases of COVID-19 out of 3,142 counties nationwide. The number of counties without a positive coronavirus case has declined rapidly, dropping from over half as the AP was preparing to publish. Of the counties without positive tests, 85% are in rural areas — from predominantly white communities in Appalachia and the Great Plains to majority Hispanic and Native American stretches of the American Southwest — that generally have less everyday contact between people that can help transmit the virus.

At the same time, counties with zero positive tests for COVID-19 have a higher median age and higher proportion of people older than 60 — the most vulnerable to severe effects of the virus — and far fewer intensive care beds should they fall sick. Median household income is lower, too, potentially limiting health care options.