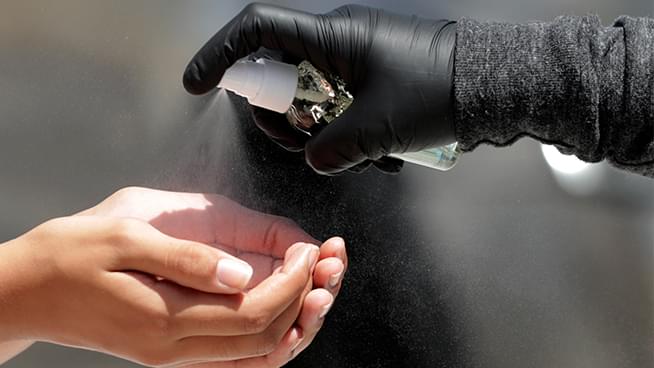 The U.S. government’s top infectious-disease expert says the country could see 100,000 to 200,000 deaths from the coronavirus outbreak. Dr. Anthony Fauci said millions could become infected in the United States. Faced with Fauci’s grim projections and the possibility that even more could die in the U.S. without measures to keep people away from each other, President Donald Trump extended federal guidelines recommending people stay home for another 30 days until the end of April.  It was a stark shift in tone by the president, who only days ago mused about the country reopening in a few weeks. From the Rose Garden, he said his Easter revival hopes had only been “aspirational.”

The tally kept by Johns Hopkins University shows the U.S. had over 140,000 infections and 2,400 deaths. Worldwide, more than 33,000 people have died, half of them in Spain and Italy.

California prepares for coronavirus surge in the week ahead

The mayor of Los Angeles is warning that the coronavirus may become so pervasive, families ought to prepare for how they will isolate themselves at home without infecting others in their households. Anticipating a surge in COVID-19 cases this week that may overwhelm healthcare systems, Mayor Eric Garcetti urged people who test positive for the coronavirus not to rush to hospitals unless they have serious symptoms. Instead, he asked residents to be “take isolation seriously.” Testing among the state’s 40 million residents has stepped up significantly after a slow start. Officials have warned the increase will bring with it a rapidly expanding number of cases.

The USNS Comfort has 1,000 beds and 12 operating rooms that could be up and running within 24 hours. It’s expected to bolster a besieged health care system by treating non-coronavirus patients while hospitals treat people with COVID-19.

New York City, the epicenter of the U.S. outbreak, reported Sunday that its toll had risen to 776.

Florida Gov. Ron DeSantis doesn’t want the people on a cruise ship where four people died and others are sick to be treated in his state.

DeSantis says it would be “a mistake” to bring them into South Florida, which already has a high and growing number of coronavirus infections. He says the area’s hospital beds need to be saved for residents and not “foreign nationals.”

He says he wants the cruise line to arrange to have “medical personnel dispatched to the ship.”

Officials say in addition to the four dead, more than 130 Zaandam passengers and crew have symptoms. Four doctors and four nurses were on board to treat 1,243 passengers and 586 crew members, many of whom are American or Canadian, says Holland America, which is owned by Miami-based Carnival Corp.

A sister ship, the Rotterdam, took on passengers who didn’t appear to be infected. They were allowed through the Panama Canal on Sunday night and are about three days from Florida.

An attempt to screen out-of-state drivers entering Florida backfired on Sunday when Interstate 95 came to a standstill, creating miles of traffic near the Georgia border.

The Florida Department of Transportation erected a checkpoint on the heavily traveled highway around noon on Sunday, citing an executive order from Gov. Ron DeSantis (R) that requires visitors from hotspots like New York to self-isolate for two weeks upon arriving in Florida.

Within a matter of hours, though, long lines of cars and trucks stretched past the state border and into Georgia. The checkpoint was shut down for four hours to give traffic a chance to clear up, but it later reopened at around 5:15 p.m., once the slowdowns had subsided and traffic cones had been adjusted to allow for a better flow of vehicles.

NYC Mayor threatens to fine those who congregate in public

New Yorkers who defy police orders when told to break up gatherings can be fined up to $500, New York City Mayor Bill De Blasio told reporters on Sunday.

Gatherings of any size are prohibited in New York state, and the NYPD has been authorized to issue summonses and fines at parks, playgrounds and places of worship where people ignore social distancing regulations and refuse to disperse, De Blasio said. Those fines can range from $250 to $500, and will also apply to people who return to gatherings after being told to leave.

De Blasio emphasized that the penalty would be only used as a last resort, saying that he didn’t want to fine people “when so many folks are going through economic distress.” But, he added, “you’ve been warned and warned again.”

As the coronavirus rages through Europe and major American cities,  more than a third of counties across the U.S. still have not reported a positive test result for infection across what are predominantly rural areas. Data analysis by The Associated Press shows that counties with zero positive tests for COVID-19 tend to have older, rural populations with lower incomes where rural health networks might be overwhelmed. The demographics hold major implications as the Trump administration  develops guidelines to rate counties by the risk of virus spread, empowering local officials to revise social distancing orders

Brazil opens stadiums, including the Maracanã, for coronavirus victims

Brazil has found a new use for several of the stadiums it built and renovated in preparation for the 2014 World Cup. Local governments plan to convert the venues into hospitals and vaccine centers for what is expected to be a surge of novel coronavirus cases.

The country’s most famous stadium, the iconic Maracanã sports complex in Rio de Janeiro, will become a temporary hospital. The Maracanã stadium held the Opening and Closing Ceremonies of the 2016 Summer Olympics and is among the best-known soccer stadiums in the world.

Brazil’s covid-19 cases approached 4,000 last week, with more than 100 deaths. Although President Jair Bolsonaro has sought to downplay the severity of the illness, Brazilians were demanding tough measures: A poll this month found that 73 percent of those surveyed supported total social distancing. Bolsonaro told reporters last week that he believes Brazilians are protected by natural immunity.

Wimbledon will be canceled for the first time since World War II, according to German Tennis Federation vice-president Dirk Hordorff. The event is scheduled to begin June 29.

“Wimbledon has stated that they will have a board meeting next Wednesday and will make the final decision there,” said Hordorff. “It is completely unrealistic to imagine that with the travel restrictions that we currently have an international tennis tournament, where hundreds of thousands of people from all over the world would travel. That is unthinkable.”

The French Open, due to start in May, has already been postponed.

Billie Eilish, Mariah Carey, Alicia Keys and Dave Grohl opened their doors to the world – literally. The musicians performed from their homes for an hour-long benefit concert to raise money during the coronavirus crisis. Keys kicked off the event Sunday singing her song “Underdog” from a piano in her home. She thanked those “risking their lives to keep us safe.” Carey sang “Always Be My Baby” from her home studio in New York. Elton John hosted the special that aired on Fox and said he hoped “this entertainment will feed and fuel your soul.”