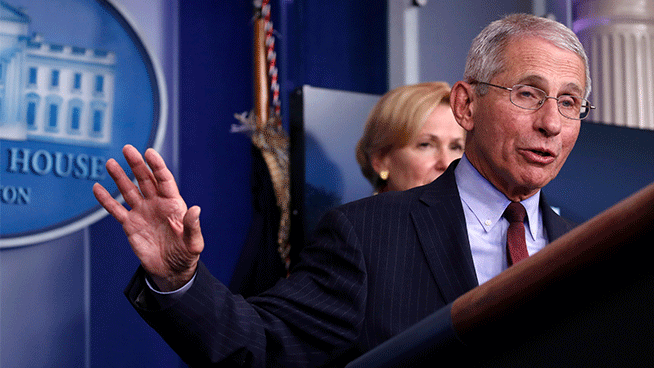 Dr. Anthony Fauci, director of the National Institute of Allergy and Infectious Diseases, speaks about the coronavirus in the James Brady Press Briefing Room of the White House, Tuesday, March 31, 2020, in Washington. (AP Photo/Alex Brandon).

Fauci says White House could recommend broader use of masks.

Dr. Anthony Fauci said the White House coronavirus task force is looking into the idea of recommending broader, community-wide use of masks to deter the spread of the new coronavirus.

Fauci said the task force first wants to make sure that such a move wouldn’t take away from the supply of masks available to health care workers.

“But once we get in a situation where we have enough masks, I believe there will be some very serious consideration about more broadening this recommendation of using masks,” Fauci said in a CNN interview Tuesday. “We’re not there yet, but I think we’re close to coming to some determination.”

He said wearing a mask may prevent an infected person from spreading the virus.

Fauci is the director National Institute of Allergy and Infectious Diseases and a leader of the U.S. response to the pandemic.

The World Health Organization on Monday reiterated its advice that the general population doesn’t need to wear masks unless they’re sick. Since the epidemic began in China, the WHO has said masks are for the sick and people caring for them.

The White House’s coronavirus coordinator on Monday warned that the pandemic could kill as many as 200,000 Americans in even a best-case scenario as state officials intensified their stay-at-home directives — further erasing any hope that the country would have a speedy recovery from the global health crisis.

Deborah Birx, the coronavirus coordinator, told NBC News that the United States could record 200,000 deaths even “if we do things together well, almost perfectly.” President Trump, who a day earlier extended social distancing guidelines through the end of April, said the move was necessary to prevent catastrophe.

“We could save more than 1 million American lives,” Trump said in a briefing at the White House on Monday. “Our future is in our own hands, and the choices and sacrifices we make will determine the fate of this virus.”

The comments underscored the reality that Americans probably will need to suffer many more weeks of economic and social pain to save lives, and even then, their efforts cannot fully prevent a disaster.

Asian shares have risen after a rally in U.S. stocks, mostly spurred by health care companies’ announcements of developments that could aid in the coronavirus outbreak. Benchmarks in Japan, South Korea, Australia and China gained in Tuesday morning trading. Optimism is budding the worst of the selling may be approaching, but markets around the world are still volatile as leaders strive to nurse their economies through the pandemic. The S&P 500 remains 22 percent below its record set last month. Johnson & Johnson said it expects to begin human clinical studies by September on a vaccine candidate for COVID-19, the disease caused by the new coronavirus.

Major companies signaled a new wave of economic distress Monday, sending hundreds of thousands of workers home without pay, as the Trump administration scrambled to get stimulus money to Americans already feeling the weight of unpaid bills.

Macy’s announced it will furlough most of its 125,000 workers as sales evaporated with the shuttering of 775 stores. Kohl’s and Gap also announced furloughs of about 80,000 each. Media giant Gannett announced furloughs for newspaper employees who earn more than $38,000 a year and pay cuts across the company. Sysco Corp., the country’s largest food distributor, also confirmed thousands of furloughs and layoffs of undisclosed number of workers worldwide.

The massive cuts have prompted some economists to predict the unemployed could top an eye-popping 40 million by mid-April, with deep economic consequences for workers struggling to make rent and mortgages amid public health isolation orders.

Walmart will begin taking workers’ temperatures at stores and warehouses before they begin their shifts.

Any employee with a temperature above 100 degrees will be sent home to seek medical treatment, if necessary, but will be paid for showing up.

The retailer will also make medical masks and gloves available for employees who want to wear them. “They will be high-quality masks, but not N95 respirators — which should be reserved for at-risk healthcare workers,” the company said.

The CDC has recommended that healthy people do not need to wear personal protective gear.

Still, some workers at Walmart, Amazon warehouses and other chains have expressed concerns that they do not have access to gloves or masks on the job and say they want to wear them.

New York’s mammoth convention center started taking patients to ease the burden on the city’s overwhelmed health system and the tennis center where the U.S. Open is held was being turned into a hospital.

Worldwide, more than 800,000 people have been infected and over 39,000 people have died, according to a tally kept by Johns Hopkins University. Italy and Spain accounted for half the deaths, while the U.S. had around 3,550 by midday, eclipsing China’s official toll of about 3,300.

New York was the nation’s deadliest hot spot, with about 1,550 deaths statewide, the majority of them in New York City.

CNN’s Cuomo says he has coronavirus, has shown symptoms

CNN’s Chris Cuomo announced Tuesday that he has tested positive for the coronavirus but promised to continue doing his prime-time show from the basement of his home.

“I just hope I didn’t give it to the kids and Cristina,” the 49-year-old newsman tweeted, in a reference to his wife.

Cuomo’s older brother, New York Gov. Andrew Cuomo, has been one of the most visible political figures during the pandemic, and appeared on his brother’s show via remote link on Monday.

The governor discussed his younger brother during his daily press briefing Tuesday morning, using it as a cautionary tale. He noted that he had scolded Chris for having their 88-year-old mother, Matilda, visiting Chris’ home two weeks ago.

“It’s my family, it’s your family, it’s all of our families,” he said. “This virus is so insidious, and we have to keep that in mind.”

Chris Cuomo noted that he’d been exposed in recent days to people who subsequently tested positive.

“We will all beat this by being smart and tough and united,” he tweeted.

The head of Italy’s national institutes of health says the country has hit the “plateau” in its coronavirus infection rate, three weeks into a national lockdown, and should start to see a decline in new cases.

Dr. Silvio Brusaferro stressed Tuesday that it would be folly to relax Italy’s productivity shutdown and stay-at-home restrictions now, even though the rate of new virus infections is slowing.

But he said, “The curve suggests we are at the plateau. We have to confirm it, because arriving at the plateau doesn’t mean we have conquered the peak and we’re done. It means now we should start to see the decline if we continue to place maximum attention on what we do every day.”

The daily numbers released by Italy’s civil protection agency confirmed the trend, showing another 4,053 infections – in line with a leveling off in recent days – to bring Italy’s total confirmed cases to 105,792. Another 837 people died, bringing Italy’s toll to 12,428, the highest in the world.

The Kentucky Republican told conservative radio host Hugh Hewitt on Tuesday that the deadly virus “came up while we were tied down on the impeachment trial.” McConnell said impeachment “diverted the attention of the government.”

US consumer confidence sinks as virus begins having impact

U.S. consumer confidence tumbled this month to its lowest level in nearly three years as the impact of the coronavirus on the economy began to be felt.

The Conference Board reported Tuesday that its confidence index dropped to a reading of 120 in March from February’s 132.6. It was the lowest reading since the index was at 117.3 in June 2017. Both a sub-index the covers consumers’ view of current business and job market conditions and another sub-index that covers expectations of future conditions fell in March.

The steep decline in the index this month reflected rising worries about the coronavirus during the survey period of March 1-18. Confidence is sure to fall further as the virus’ impact takes a bigger toll on the economy.

Analysts said the sharp drop in the confidence index reflects rising concerns about the damage the virus will cause and about the sharp declines in stock markets.

Singer Kesha has announced in an email to her fans Tuesday afternoon that she is postponing her 2020 tour.

“I take an enormous amount of pride in making my shows a safe place for anyone no matter what, so with that in mind, my team is working hard to reschedule my tour for later in the year.  Hold onto your tickets as they will be honored at the new shows.”

She added, “I’m sad that I won’t see you as soon as I had hoped, but it’s more important that we all keep each other safe.”

Former U.S. Davis Cup captain Patrick McEnroe says in a video posted on social media that he tested positive for the coronavirus.

McEnroe, younger brother of eight-time major champion John, said he did a drive-through test in upstate New York after developing what he called “minor symptoms” about 10 days ago.

Patrick McEnroe said: “The good news is I feel fine. My symptoms have passed. I feel, really, 100 percent.”

As a player, he won one tournament in singles and 16 in doubles, including the 1989 French Open.

He succeeded his brother as Davis Cup captain and served in that job for nearly a decade, leading the United States to the title in 2007.

The younger McEnroe also served as general manager of player development for the U.S. Tennis Association.

He and his brother now are both TV analysts for tennis matches, sometimes working alongside each other in the booth.

The new ownership group of the Kansas City Royals, along with players, staff and the organization’s charitable arm are donating more than 500,000 meals to Harvesters, a local food bank helping those in need during the COVID-19 pandemic.

Royals chairman John Sherman, who purchased the club late last year from David Glass, said in a statement that his group of players, executives and investors “share a deep connection to the Kansas City community, which is why the entire Royals family is coming together to do our part.”

The Royals would have opened their season against the White Sox last week in Chicago. Their home opener would have been Thursday against the Mariners. At this point, nobody is quite sure when the club will take the field.

Longtime outfielder Alex Gordon donated to the Royals’ food drive. He says that his family is staying home during the pandemic, but “we feel very blessed, and we want to make sure our neighbors are taken care of.”