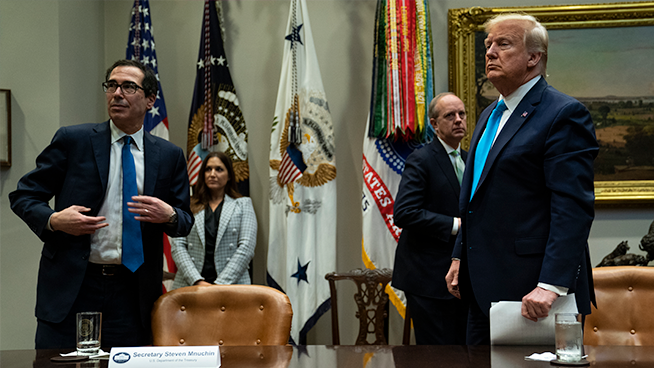 Treasury Secretary Steven Mnuchin and President Donald Trump listen to a question during a conference call with banks on efforts to help small businesses during the coronavirus pandemic, at the White House, Tuesday, April 7, 2020, in Washington. (AP Photo/Evan Vucci).

New York City’s death toll from the coronavirus eclipsed the number of those killed at the World Trade Center on 9/11, health officials said Tuesday.

At least 3,202 people have died in New York from COVID-19, according to the count released by the city. The deadliest terror attack on U.S. soil killed 2,753 people in the city and 2,977 overall, when hijacked planes slammed into the twin towers, the Pentagon and a Pennsylvania field on Sept. 11, 2001.

But in an encouraging sign, Cuomo reported that hospital admissions and the number of those receiving breathing tubes are dropping, indicating that measures taken to force people to keep their distance from one another are succeeding.

And alarming as the one-day increase in deaths might sound, the governor said that’s a “lagging indicator,” reflecting severely ill people who had been hospitalized before this week. Over the past several days, in fact, the number of deaths in New York appeared to be leveling off.

Could US start to re-open by the end of the month? It’s possible

U.S. Surgeon General Jerome Adams echoed optimistic comments by President Donald Trump and Vice President Mike Pence, saying that if Americans keep practicing social distancing for the rest of April “we can start to slowly reopen in some places.”

Speaking on ABC’s “Good Morning America,” Adams says U.S. officials are watching to see how China and South Korea handle reopening their societies after putting mitigation efforts in place to deal with outbreaks of the coronavirus.

Adams applauded West Coast public health officials for enacting social distancing early in California and Washington state and providing a “blueprint for how we deal with this in the rest of the country.”

Both Trump and Pence have spoken in recent days of seeing optimistic signs in the data.

The Republican leader said he would move this week to supplement the $350 billion approved for companies in the just-passed $2.2 trillion rescue package.

The so-called Paycheck Protection Program “may run dry” without it, he said.

The action is set for Thursday.

Senate Democratic Leader Chuck Schumer is calling for up to $25,000 “heroes” pay for frontline health care and service industry workers as Congress pushes ahead with a new coronavirus crisis rescue package. Schumer declared the emerging proposal the “highest priority.”

The pay would go to nurses, truck drivers grocery store clerks and others he said are keeping Americans safe. Congressional leaders and President Donald Trump are plunging ahead with plans for more aid beyond the just-passed $2.2 trillion effort.

It’s unclear if the new proposal would find support from the Trump or Republicans in Congress. Officials warn will be a hard week with a rising number of cases and deaths.

The lockdown that served as a model for countries battling the coronavirus around the world ended after 11 weeks Wednesday. Chinese authorities are now allowing residents of Wuhan to once again travel in and out of the sprawling city where the pandemic began.

From just after midnight, the city’s 11 million residents are permitted to leave without special authorization as long as a mandatory smartphone application shows they are healthy and have not been in recent contact with anyone confirmed to have the virus.

Wuhan is where most of China’s more than 82,000 reported virus cases and over 3,300 deaths took place.

Italy’s number of new coronavirus cases has continued to drop.

Civil Protection authorities said Tuesday there were 3,039 new cases in a 24-hour period. Italy hasn’t seen such a low daily number since the early weeks of the outbreak.

Said Giovanni Rezza, director of the infectious disease division of the national health institute: “Finally it seems we are beginning to see a lessening of new cases” after a plateau phase. He expressed satisfaction that even Italy’s most stricken region, Lombardy, is also witnessing the same trend.

Italy has 135,586 cases confirmed cases. After some 600 additional deaths were registered on Tuesday, Italy has counted 16,523 deaths in the COVID-19 outbreak.

British Prime Minister Boris Johnson remains in stable condition in an intensive care unit and has not been put on a ventilator.

Johnson spokesman James Slack says “the prime minister has been stable overnight and remains in good spirits. He is receiving standard oxygen treatment and is breathing without any other assistance.”

He said Johnson was not receiving mechanical ventilation and does not have pneumonia.

Johnson was admitted to St. Thomas’ Hospital late Sunday with a fever and cough that persisted 10 days after he was diagnosed with COVID-19. He was moved to the intensive care unit Monday evening after his condition worsened.

Anna Fortunato, a 90-year-old survivor of COVID-19, has a message for the rest of us:

Do not be afraid. Do not despair.

That she is here to advise others is something of a surprise to Fortunato herself.

The widowed mother of five began feeling ill March 13. She’d heard about COVID-19 but didn’t give it much thought. She wound up spending 13 days in the hospital.

Whether due to that or any other treatment, Fortunato began to improve.

She knows how lucky she is.

“I had a good husband, and my children are beautiful,” said Fortunato, who turns 91 in June. “I’ve lived to see grandchildren, and great-grandchildren … so I AM fortunate.”

People familiar with the discussion tell The Associated Press that putting all 30 teams in the Phoenix area this season and playing in empty ballparks was among the ideas discussed by Major League Baseball and the players’ association.

The sides held a phone call to talk about paths forward for a season delayed by the coronavirus pandemic. Ideas are still in the early stage. Arizona’s advantage is 10 spring training ballparks plus the Arizona Diamondbacks’ Chase Field all within about 50 miles. Scott Boras, baseball’s most prominent agent, said it might be the quickest method to start play.

Churchill Downs has delayed reopening stables at the track and training center to April 28 and postponed its spring meet that was scheduled to open April 25.

The track last month postponed the 146th Kentucky Derby from May 2 to Sept. 5, the first time since 1945 the race will not be run on the first Saturday in May.

Churchill Downs’ stables have been closed since Dec. 31 for winter renovations and were originally scheduled to open March 17 before being delayed in response to executive orders from Gov. Andy Beshear to contain and limit the spread of COVID-19.

Track president Kevin Flanery said in a statement that Churchill Downs is following the lead of the governor and public health officials and added, “Our team will be ready to open under the relevant guidance we are given when the time is right.”