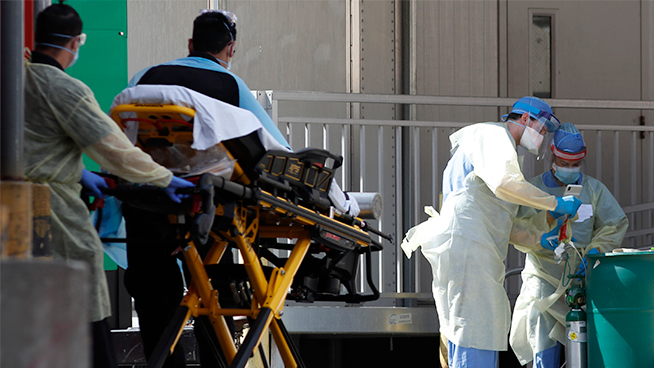 A patient is wheeled past two medical workers wearing personal protective equipment (PPE) as the pair study a cell phone after carrying an oxygen tank out of Elmhurst Hospital Center’s emergency room, Tuesday, April 7, 2020, during the current coronavirus outbreak in the Queens borough of New York. The new coronavirus causes mild or moderate symptoms for most people, but for some, especially older adults and people with existing health problems, it can cause more severe illness or death. (AP Photo/Kathy Willens).

‘A lot of pain.’ NY has biggest 1-day jump in virus deaths

New York state reported 731 new COVID-19 deaths Tuesday, its biggest jump since the start of the outbreak, dampening some of the cautious optimism officials have expressed about efforts to stop the spread of the virus.

The alarming surge in deaths comes as new hospital admissions have dropped on average over several days, a possible harbinger of the outbreak finally leveling off. Cuomo said the death tally is a “lagging indicator” that reflects the loss of critically ill people hospitalized earlier.

“That’s 731 people who we lost. Behind every one of those numbers is an individual. There’s a family, there’s a mother, there’s a father, there’s a sister, there’s a brother. So a lot of pain again today for many New Yorkers,” Cuomo said at a briefing at the state Capitol.

Massive effort to get Los Angeles homeless into hotels

Los Angeles has embarked on an unprecedented effort to bring thousands of homeless people off the streets and into hotels to protect the most vulnerable as the coronavirus continues to spread.

California Gov. Gavin Newsom announced last week that money from the federal government would help pay for at least 15,000 hotel rooms statewide during the pandemic.

But Los Angeles County has the state’s largest concentration of homeless people and has set its own goal of 15,000 rooms. The rooms are set aside for the most vulnerable people, those over 65 or those with underlying health conditions.

The Pentagon says the number of confirmed coronavirus cases in the military has surged to nearly 2,000.

Among the services, the active duty Navy has the most cases, with more than 500. The Army has 470.

Dr. Deborah Birx, the White House coronavirus response coordinator, said officials are looking at areas in the United States where mitigation efforts seem to be working to determine if the social distancing guidelines currently in place could be relaxed at the end of April.

“We’re doing a series of clear investigations of what happened in Washington and L.A. and what does that mean and how you keep the number of cases down,” Birx said today during an appearance on ABC’s “Good Morning America.”

Birx also said officials expect to roll out an antibody test in the next 10 to 14 days “so we can really tell how many Americans were asymptomatic and infected.”

U.S. and U.K. security agencies have issued a joint security warning about cyberattacks using the coronavirus outbreak as a lure.

The U.S. Department of Homeland Security and Britain’s National Cyber Security Center says criminals and what they call “persistent threat” groups are attempting to transmit ransomware and malware that are tied to the COVID-19 outbreak. One example includes emails that purport to come from the World Health Organization.

Others are phishing attempts that appear to come from Microsoft or other tech companies whose remote tools are often used by people working from home.

The statement says they have not detected an overall increase in cybercrime. But they have noted a growing use of malicious threats involving COVID-19 related themes.

Pressure on Italy’s intensive care units continued to ease, with 99 fewer beds occupied over the last 24 hours while the greatest number of people were counted as recovered since the pandemic hit Italy: 2,099.

Ranieri Guerra, a representative of the World Health Organization, told reporters the improvements were a result of actions taken two or three weeks ago, which reinforces the necessity to continuing the containment measures.

Rishi Sunak says Johnson has been sitting up in bed and engaging with his doctors at St. Thomas’ Hospital.

Johnson was admitted to the hospital on Sunday, 10 days after being diagnosed with COVID-19. He was transferred to the ICU on Monday when his condition deteriorated.

Pope Francis has said the coronavirus pandemic is one of “nature’s responses” to humans ignoring the current ecological crisis.

In an email interview published Wednesday in The Tablet and Commonwealth magazines, the pontiff said the outbreak offered an opportunity to slow down the rate of production and consumption and to learn to understand and contemplate the natural world.

“We did not respond to the partial catastrophes. Who now speaks of the fires in Australia, or remembers that 18 months ago a boat could cross the North Pole because the glaciers had all melted? Who speaks now of the floods?” the Pope said.

“I don’t know if these are the revenge of nature, but they are certainly nature’s responses,” he added.

The pandemic has radically changed the way the Vatican operates, with the Pope celebrating Palm Sunday mass in an empty church and the sites normally packed with tourists empty.

The world’s biggest snowboard maker is donating half-a-million respirator masks to hospitals across the Northeast. Longtime builder Burton is harnessing the company’s worldwide footprint to help put a dent in America’s lagging stockpile of personal protective equipment for the coronavirus pandemic.

The company’s chairwoman says Burton’s leading binding manufacturer is from China and directed her to a nearby factory that was making the FDA-approved KN95 masks. Burton had to hurry to secure the masks.

But it did, and now it’s in the process of shipping them straight from China to near its headquarters in Vermont. The masks will go to hospitals in Vermont and New Hampshire and in the hard-hit areas in New York and Boston.

TCU football coach Gary Patterson and his wife, Kelsey, made a $50,000 donation to support the school’s Frog Family Crisis Fund.

Athletic director Jeremiah Donati announced the donation in a tweet. The fund supports TCU students and their families who are in need during times such as the current pandemic.

Patterson is the second-longest tenured FBS head coach, going into his 20th season next fall leading the Horned Frogs. He was their defensive coordinator three seasons before that.