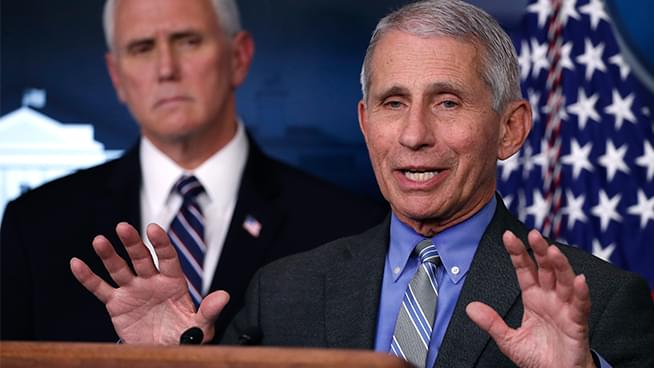 In a first, small step toward reopening the country, the Trump administration has issued new guidelines to make it easier for essential workers who have been exposed to COVID-19 get back to work – if they have no symptoms. The director of the Centers for Disease Control and Prevention says essential employees, such as health care and food supply workers, who had been within 6 feet of a confirmed or suspected case of the coronavirus can return to work under certain circumstances. The CDC recommends taking their temperature before shifts, wearing face masks and practicing social distancing.

Congress in standoff on virus aid, but first checks coming

Congress is rushing headlong into a conflict over the next coronavirus aid package. The White House wants to pump $250 billion into a small business fund but opposes Democrats’ proposal to tack on billions for protective gear, food stamps and aid to state and local governments. Still, signs of fresh progress have emerged. Treasury Secretary Steven Mnuchin told lawmakers direct deposits to Americans will begin next week. Mnuchin also said $98 billion has been approved for the small business loans.  President Donald Trump is urging passage of the small business funds “ASAP.” A test vote is set for Thursday.

California to buy 200 million masks a month amid outbreak

California Gov. Gavin Newsom says the state will spend nearly $1 billion to purchase up to 200 million masks a month during the coronavirus outbreak. The masks will be made overseas. Newsom said the state has signed multiple contracts with an unidentified consortium of nonprofits and a California-based manufacturer to obtain the masks. The Newsom administration estimates total payments will be $990 million. California and other states have had trouble finding enough masks during the outbreak.

Time is running out to build temporary hospitals

The general who heads the Army Corps of Engineers says communities are running out of time to build new medical facilities for any overflow of coronavirus patients that local hospitals can’t handle.

Lt. Gen. Todd Semonite tells reporters he believes the Corps will be done starting new projects in about a week. He says government leaders “have to think through the worst case and get ahead of it while they have time.”

So far, 17 facilities, with about 15,000 beds, have been built, and another 17 have been planned by the Corps and developed by local communities and contractors. Another 23 facilities are pending, but it’s not clear how many of those may actually be built.

Record 16.8 Million Have Sought US Jobless Aid Since Virus

With a startling 6.6 million people seeking unemployment benefits last week, the United States has reached a grim landmark: More than one in 10 workers have lost their jobs in just the past three weeks to the coronavirus outbreak.

The figures collectively constitute the largest and fastest string of job losses in records dating to 1948. By contrast, during the Great Recession it took 44 weeks — roughly 10 months — for unemployment claims to go as high as they now have in less than a month.

The damage to job markets is extending across the world. The equivalent of 195 million full-time jobs could be lost in the second quarter to business shutdowns caused by the viral outbreak, according to the United Nations’ labor organization.

It estimates that global unemployment will rise by 25 million this year. And that doesn’t even count workers on reduced hours and pay. Lockdown measures are affecting nearly 2.7 billion workers — about 81 percent of the global workforce — the agency said.

More than 20 million people may lose jobs this month. The unemployment rate could hit 15% when the April employment report is released in early May.

Senate Democrats have stalled President Donald Trump’s request for $250 billion to supplement a “paycheck protection” program for businesses crippled by the coronavirus outbreak, demanding protections for minority-owned businesses and money for health care providers and state and local governments.

They sidetracked a request by Majority Leader Mitch McConnell, R-Ky., to give the unanimous consent necessary to fast-track Trump’s request.

“We need more funding and we need it fast,” McConnell said as he opened the Senate, assuring them there would be future bills to deal with other issues.

Democrats’ demands sparked a spirited response from McConnell, who implored them not to block “emergency aid you do not even oppose just because you want something more.”

“Nobody thinks this will be the Senate’s last word on COVID-19. We don’t have to do everything right now,” McConnell said. “Let’s continue to work together, with speed and bipartisanship. We will get through this crisis together.”

Thursday’s Senate development doesn’t mean the legislation is dead. Democrats and Republicans agree the aid is urgently needed. The dispute is over billions more Democrats want to add to the legislation.

‘You can’t relax’: NY deaths up, but hospital trends hopeful

New York state reported a record number of coronavirus deaths for a third consecutive day with 799, raising the total above 7,000. Gov.

Andrew Cuomo said Thursday that despite the worsening death toll, New York City hospitals have so far stood up under the strain. State health officials now say they support people wearing cloth face coverings when they go out in public, especially in areas of “significant community transmission.”

Mayor Bill de Blasio says the city needs continued social distancing plus more testing capacity to reach a point where the loosening of restrictions could be considered.

Americans may be able to take summer vacations, Fauci says

Dr. Anthony Fauci, the head of the National Institute of Allergy and Infectious Diseases, said Americans have the potential to take summer vacations — if we continue with mitigation strategies to prevent a resurgence.

Speaking to CBS This Morning, Fauci was asked if he could envision a typical summer, filled with vacations, baseball games, weddings and family reunions.

“And I say that with some caution, because as I said, when we do that, when we pull back and try to open up the country, as we often use that terminology, we have to be prepared that when the infections start to rear their heads again that we have it in place a very aggressive and effective way to identify, isolate, contract trace and make sure we don’t have those spikes we have now.

So the answer to your question is yes, if we do the things that we need to do to prevent the resurgence.”

Getting back to normal is not like a light switch that you turn on and off, Fauci said, adding it’ll be gradual and depend on where in the country you live.

“The bottom line of it all is, that what we see looking forward, it is very likely that we will progress towards the steps towards normalization as we get to the end of this thirty days. And I think that’s going to be a good time to look and see how quickly can we make that move to try and normalize. But hopefully, and hopefully, by the time we get to the summer we will have taken many steps in that direction,” he added.

When asked if Fauci would be taking a summer vacation, he laughed, “I don’t take vacations.”

Canadian Prime Minister Justin Trudeau says Canadians will need to stay at home and practice physical distancing for months as the first wave of COVID-19 cases in the country won’t end until the summer. And he says Canada won’t return to normal until there is a vaccine, which could take a year and a half.

Steph Curry raised the spirits of a group of coronavirus nurses in Oakland, California, when he surprised them with a FaceTime call Tuesday.

Shelby Delaney, an ICU nurse at Summit Medical Center, had started wearing Curry’s Warriors kit under her scrubs to “summon my inner warrior.”

She was given a further lift this week when the six-time NBA All-Star was on hand to offer his own personal support.

“Yesterday was one of the coolest moments of my life; I was able to meet my hero, Stephen Curry,” Delaney wrote on Facebook.

“He thanked me and my colleagues for all our hard work on the frontlines during this pandemic. And I was finally able to thank him for all the inspiration and strength he’s given me over the years.

“He also gave me some excellent advice on how to be positive and kind during tough times, which I think can apply to all of us these days.”

Florida will begin drive-through testing at the Daytona Speedway

Beginning tomorrow, AdventHealth Centra Care will test for Covid-19 at the Daytona International Speedway in Florida, the company announced in a press release Thursday.

The tests will be available to anyone who meets the criteria for testing, as set by the Centers for Disease Control and Prevention, the release said.

A doctor’s order in not required for testing.

“Making tests available is one of the most important things we can do to prevent further spread of COVID-19 and keep our community safe,” said Dr. Scott Brady, president and CEO of AdventHealth Centra Care. “We’re asking people to stay home and practice social distancing, so bringing testing closer to where they live is essential.”

Wiped out of toilet paper? Here’s why

Finding toilet paper in a global pandemic is a struggle. That’s because it’s part of a very tight supply chain. Toilet paper is so bulky and cheap that stores don’t keep big inventories on hand.

So as more households buy a little extra, that causes a lot of disruption. Also, household demand is up 40% as offices and schools close, but toilet paper companies can’t easily switch to make more household paper because commercial paper is very different.

There is some good news. Analysts say the panic buying from mid-March has eased somewhat, and toilet paper companies say they’re making fewer varieties in an effort to speed product to stores.