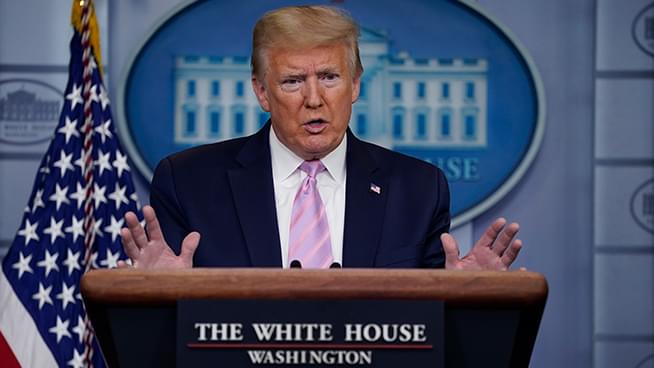 At today’s briefing of the White House Coronavirus Task force,  President Trump said initial projections of anywhere from 100,000 to 240,000 deaths is likely not where we will wind up. He says it’s due to stabilization in cities like Detroit and New Orleans.

The message was echoed by Dr Deborah Birx, who said  while we have not reached the peak yet… there are improvements in “leveling” the curve.

Dr.Birx saying it gives “great heart” that the US is now starting to track like Italy was a week ago.  She said New York City, Boston and Chicago are all seeing improvements. Dr. Birx also praised the mayors of Washington, DC, Baltimore and Philadelphia for working to change the curve in cities that the White House was worried would become the next hot spots.

The task force is still stressing the importance of social distancing and following all the CDC guidelines to keep this trend going.

Good Friday observed at home ahead of Easter weekend

President Donald Trump says that although Americans will not be able to gather as they normally would on Easter, they can use “this sacred time” to focus on prayer, reflection and on growing their relationship with God.

The president participated in an Easter prayer from the Oval Office on Good Friday.

He acknowledged the sacrifices that people are making to end the pandemic, saying “at this holy time, our nation is engaged in a battle like never before.”

The president asked all Americans to pray that God would heal the nation, bring comfort to those who are grieving and to give strength to the nation’s health care providers.

California has seen its first daily decrease in intensive care hospitalizations during the coronavirus outbreak. Gov. Gavin Newsom said Thursday the number of ICU placements declined by 1.9% on Wednesday. He said the decline was encouraging, but urged people not to read too much into it. Newsom has said the number of ICU hospitalizations is a key indicator for how many health care workers and medical supplies the state needs. Newsom also said California hospitals are using only about one-third of their ventilators. He said about 8,000 ventilators are available. California has more than 19,100 cases and at least 507 deaths.

Gov. Andrew Cuomo reported that coronavirus deaths in New York jumped by 777 in one day. Meanwhile, the number of people hospitalized is growing far less than last week, a possible sign the outbreak in New York is peaking.

New York state is getting help from Google to overhaul a decades-old unemployment benefits system that has left laid-off workers frustrated and awaiting help.

Cuomo says the state Department of Labor’s system has crashed because of a record-shattering surge in claims amid outbreak-related layoffs.

The federal Health and Human Services department says it’s releasing the first $30 billion in grants provided by the stimulus bill to help keep the U.S. health care system operating during the coronavirus outbreak.

Congress provided $100 billion for the health care system in the $2 trillion stimulus bill.

Officials say the relief funds will go to hospitals and doctors through Medicare and will be based on their billings to the program last year. Hospitals are supposed to use some of the money to cover COVID-19 treatment for the uninsured, although an independent study earlier this week suggests it may not be enough.

Delaware’s Dover Air Force Base is using 3D printers to make face shields to protect against the spread of the coronavirus.

The U.S. Air Force said in a press release on Thursday that more than 70 face shields were printed by a team of airmen at its innovation lab. The lab, known as BEDROCK, can produce up to 20 face shields each day. The shields are made of a plastic that’s chemically resistant and reusable.

The shields include a thin plastic visor as well as an elastic headband. Master Sgt. Justin Pittman said that the team making the shields “functions like a well-oiled machine.”

A Virginia university that received donated ventilators to help train its nursing students is returning the favor.

Shenandoah University in Winchester said Thursday it has donated three ventilators to Valley Health, which operates small hospitals in Woodstock, Luray, and throughout the Shenandoah Valley.

The university received the ventilators several years ago as a donation from Valley Health to train nursing and respiratory therapy students.

The ventilators can be used to treat patients suffering from COVID-19, the disease associated with exposure to the new coronavirus. Last week the university donated 2,500 hospital masks to Valley Health.

The data is being provided by Descartes Labs in Santa Fe, which has access to the cell phone data, the governor’s office said in a statement to CNN.

The state also wants to screen truckers who are bringing in supplies and take their temperatures but doesn’t have enough temperature readers to do so, Lujan Grisham said.

“We’re really nervous that this virus will follow travelers into the state,” she explained.

The state is using road signage to let travelers from out of state know that many state parks are closed and small communities should not be visited, Lujan Grisham said.

Apple and Google are working together to help track the coronavirus

Apple and Google are partnering to help authorities track exposure to the coronavirus using Bluetooth technology.

The two Silicon Valley giants will work on a platform to enable contact tracing, a measure that identifies people who have been exposed to the virus and who they have been in contact with, the companies announced Friday.

The companies will first release interfaces built on existing public health apps in May that can work on iOS or Android systems, followed by a more comprehensive platform in the coming months to which users will be able to opt in.

Microsoft is giving its workers an additional three months of paid parental leave to deal with extended school closures due to the coronavirus outbreak.

Parents who work for Microsoft can choose how and when to use the leave — whether it’s a three-month stretch or a few days a week — a company spokesperson told CNN Business.

The policy is meant to “give our employees greater flexibility and time off as they face extended school closures,” the spokesperson added.

The XFL has suspended operations and laid off its employees.

Employees were told Friday of the layoffs during an in-house conference call. The upstart league backed by WWE canceled the remainder of its season last month because of the coronavirus pandemic, but promised to be back in 2021.

The moves have left the league’s future in doubt. The XFL has eight franchises and played five games out of a planned 10-game schedule. It drew decent TV ratings early on and had deals with ESPN and Fox.