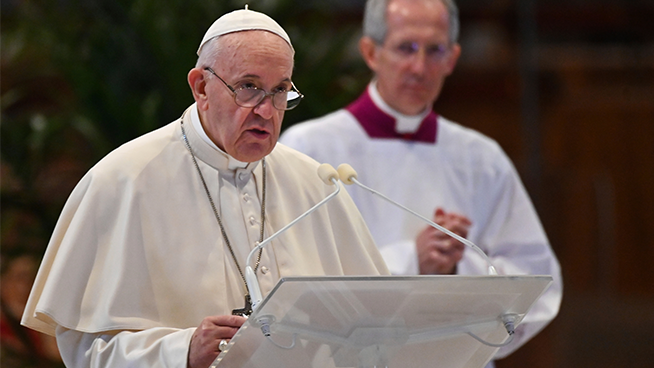 Pope Francis delivers his message during Easter Sunday Mass inside an empty St. Peter’s Basilica, at the Vatican, Sunday, April 12, 2020. Pope Francis and Christians around the world marked a solitary Easter Sunday, forced to celebrate the most joyful day in the liturgical calendar amid the sorrowful reminders of the devastation wrought by the coronavirus pandemic. The new coronavirus causes mild or moderate symptoms for most people, but for some, especially older adults and people with existing health problems, it can cause more severe illness or death. (Andreas Solaro/Pool Photo via AP).

Pope urges solidarity on an Easter of both joy, virus sorrow

Pope Francis called for solidarity the world over to confront the “epochal challenge” posed by the coronavirus pandemic, as Christians celebrated a solitary Easter Sunday, blending the joyful feast day with sorrow over the toll the virus has already taken.

Families that normally would attend morning Mass wearing their Easter best and later join friends for celebratory lunches hunkered down at home. Police checkpoints in Europe and closed churches around the globe forced the faithful to watch Easter services online or on TV.

The IRS says the first economic support payments stemming from the coronavirus outbreak have been deposited in taxpayers’ bank accounts.

In its tweeted announcement Saturday night, the IRS didn’t say how many taxpayers have received the payments or how much money has been disbursed so far.

The tweet says: “We know many people are anxious to get their payments; we’ll continue issuing them as fast as we can.”

Anyone earning up to $75,000 in adjusted gross income and who has a Social Security number will receive a $1,200 payment. Parents will also receive $500 for each qualifying child.

The payment steadily declines for those who make more.

New York is wrapping up its worst week in deaths so far of the coronavirus outbreak, but there were a few signs of hope.

At the end of the day Saturday, there were 18,707 people hospitalized with the virus in the state. That was up only 73 since the previous day.

The bad news has been that large numbers of people are still dying every day. Gov. Andrew Cuomo announced Sunday that 758 people died Saturday, the sixth day in a row that the toll topped 700.

In all, 5,226 people were killed by the virus in the week that ended Saturday. That’s raised the total number of deaths in the state to 9,385.

If social distancing is relaxed, US would see rebound of coronavirus cases, health expert says

Dr. Christopher Murray, the director of the Institute for Health Metrics and Evaluation, said Sunday on CBS that if the social distancing measures and closures were relaxed May 1, the country would see a rebound of coronavirus cases.

“We don’t think the capability in the states exists yet to deal with that volume of cases and so by July or August we could be back in the same situation we are in now” if there was premature opening of the country, Murray said.

Murray noted states on the West Coast that are father along in the pandemic will still need “weeks of closures” beyond the peak for the opportunity to conduct proper testing and contact tracing.

Citing Dr. Anthony Fauci’s statements on CNN that some states would open up in mid-May, relaxing closures and social distancing measures on a rolling basis poses a new set of questions that have not been addressed, Murray said.

“Of course there’s a big issue of states are on different timings of their epidemics, which we know is the case. How are they going to control importation from other states into their state,” Murray added.

British Prime Minister Boris Johnson was discharged from a London hospital where he was treated in intensive care for the coronavirus as the U.K. on Sunday became the fourth European country to surpass 10,000 virus-related deaths.

Johnson’s office said he left St. Thomas’ Hospital and will continue his recovery at Chequers, the prime minister’s country house.

“On the advice of his medical team, the PM will not be immediately returning to work,” the statement said. “He wishes to thank everybody at St. Thomas’ for the brilliant care he has received.”

Johnson had been in the hospital for a week and had spent three nights in the intensive care unit. Earlier in the day, he said he owes his life to the National Health Service medical workers who treated him.

Walt Disney World plans to stop paying wages to 43,000 workers in about a week while allowing them to keep their benefits for up to a year in what is the largest wave of furloughs since the theme park resort closed in mid-March because of the new coronavirus spread.

Workers will be able to keep their medical, dental and life insurance benefits for the length of the furlough period, or up to a year. Seniority and wage rates will remain unchanged for the workers whose furloughs start April 19, according to a statement from the Service Trades Council, the coalition of unions representing the Disney World workers.

“The union agreement provides stronger protections and benefits for 43,000 union workers at Disney than virtually any other furloughed or laid-off workers in the United States,” the union said in a statement to members.

About 200 workers will remain on the job performing “essential duties” during the closure, and they will be offered positions based on seniority, the union said.

Blood tests for the coronavirus could play a key role in deciding whether millions of Americans can safely return to work and school. But public health officials warn that the current “Wild West” of unregulated tests is creating confusion that could ultimately slow the path to recovery.

More than 70 companies have signed up to sell so-called antibody tests in recent weeks, according to U.S. regulators. Governments around the world hope that the rapid tests, which typically use a finger-prick of blood on a test strip, could soon ease public restrictions by identifying people who have previously had the virus and have developed some immunity to it.

But key questions remain: How accurate are the tests, how much protection is needed and how long will that protection last.

The blood tests are different from the nasal swab-based tests currently used to diagnose active COVID-19 infections. Instead, the tests look for blood proteins called antibodies, which the body produces days or weeks after fighting an infection. The same approach is used for HIV, hepatitis, Lyme disease, lupus and many other diseases.

Because of the relative simplicity of the technology, the Food and Drug Administration decided to waive initial review of the tests as part of its emergency response to the coronavirus outbreak.

Right now, the tests are most useful for researchers studying how the virus has spread through the U.S. population. The government said Friday it has started testing 10,000 volunteers. The White House has not outlined a broader plan for testing and how the results might be used.

With almost no FDA oversight of the tests, “It really has created a mess that’s going to take a while to clean up,” said Eric Blank of the Association for Public Health Laboratories. “In the meantime, you’ve got a lot of companies marketing a lot of stuff and nobody has any idea of how good it is.”

America’s roads are a lot less congested, due to coronavirus shutdowns that have kept millions of commuters, shoppers and vacationers parked at their homes.

While that makes it easier to patch potholes, it also could spell trouble for road and bridge projects. The longer motorists remain off the roads, the harder it will be for states to afford repairs in the months and years ahead.

Reduced traffic volumes are expected to cause a sharp drop in state revenue from fuel taxes, tolls and other user fees that could force delays for thousands of projects nationwide unless the federal government intervenes.

In stark contrast to the normal hustle and bustle of tourists and enophiles, the grounds sit empty at California’s oldest commercial winery — the historic Buena Vista.

Tasting rooms statewide shut down last month after the governor ordered businesses to close to slow the spread of the new coronavirus. So Buena Vista and other wineries that want to stay viable and connected to their customers during the pandemic are harnessing technology and platforms such as Facebook Live to offer virtual wine experiences.

Actor George Webber, dressed in period clothing as “The Count” Agoston Haraszthy — the founder of Buena Vista in 1857 — takes online viewers back in time, broadcasting several days a week inside the oldest wine cave dug in the state and offering a “virtual tasting.”

“While it’s certainly an interesting phenomenon — a different world now without throngs of people visiting our tasting room — this is a remarkable opportunity to present the wines, the history behind the wines, the flavors and aromas of each wine in a format that provides plenty of time to talk about the wines and share my perceptions with people around the world who can comment live,” Webber said. “It is a fun and unique way to keep commerce going in these difficult times.”