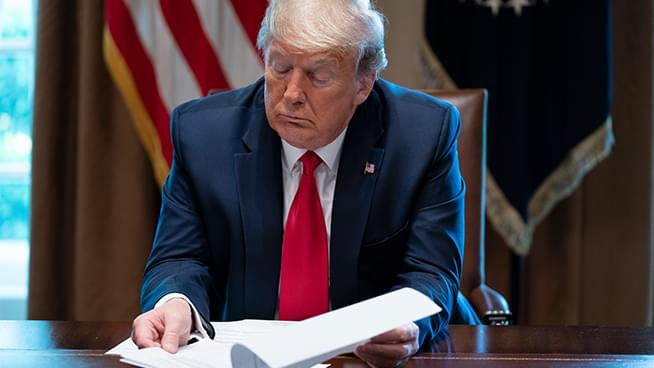 President Donald Trump looks at his notes during a meeting with people that have recovered from COVID-19, in the Cabinet Room of the White House, Tuesday, April 14, 2020, in Washington. (AP Photo/Evan Vucci).

Trump claims he has ‘total’ authority over reopening economy

President Donald Trump and governors from both parties are disputing who has the authority to reopen the economy. Trump told reporters at a White House briefing Monday that he has “total” authority to decide how and when to roll back tough social distancing guidelines aimed at fighting the new coronavirus. But governors maintain that they have the primary constitutional responsibility for ensuring public safety in their states and will decide when it’s safe to begin a return to normal operations. Democratic leaders in the Northeast and along the West Coast are forming separate state compacts to coordinate their efforts to scale back stay-at-home orders or reopen businesses.

President Donald Trump is meeting with patients who have recovered from the coronavirus.

Among the former COVID-19 patients meeting with Trump at the White House is Michigan state lawmaker Karen Whitsett. Whitsett has publicly credited Trump for publicizing the use of an anti-malaria drug – which she says she used during her illness – as a treatment for the disease.

Whitsett thanked Trump again during Tuesday’s meeting and said hydroxychloroquine must to readily available for the people of Detroit, which is in her district.

Trump has promoted the drug as a treatment for COVID-19 although it hasn’t been approved by the federal government for that specific use.

Trump is also hearing from a passenger who was on a cruise ship that experienced an outbreak of coronavirus.

Cuomo says Trump is not a king, can’t force states to reopen

New York Gov. Andrew Cuomo took to morning TV shows Tuesday to push back against President Donald Trump’s claim of “total” authority to reopen the nation’s virus-stalled economy, noting that a president is not an absolute monarch.

“We don’t have a king,” Cuomo said on NBC’s “Today. “We have a president. That was a big decision. We ran away from having a king, and George Washington was president, not King Washington. So the president doesn’t have total authority.”

The Democratic governor, whose state has become the epicenter of the coronavirus pandemic in the United States, was reacting to Trump’s assertion Monday that “when somebody is president of the United States, the authority is total.”

When asked on CNN’s “New Day” what he would do if the Republican president ordered him to reopen New York’s economy, Cuomo said “If he ordered me to reopen in a way that would endanger the public health of the people of my state, I wouldn’t do it. And we would have a constitutional challenge between the state and the federal government and that would go into the courts and that would be the worst possible thing he could do at this moment.”

Fauci: ‘We’re not there yet’ on key steps to reopen economy

The government’s top infectious disease expert says the U.S. still lacks critical testing and other procedures needed to begin reopening the nation’s economy, adding a dose of caution to increasingly optimistic projections from the White House.

Dr. Anthony Fauci told The Associated Press that easing off strict social-distancing rules would be on a “rolling” basis around the country. He says localities should be prepared to see new COVID-19 cases when that happens and act quickly to contain them. Asked about May 1, an increasingly discussed target date, Fauci called that possible but “a bit overly optimistic.”

Congress delays return to Washington until at least May 4

The House and Senate have pushed back their next meeting until at least May 4 to protect lawmakers from the coronavirus pandemic. That’s a change from their plan to convene in Washington next week to consider new legislation to prop up the hard-hit U.S. economy.

The average age of lawmakers is right around 60, with many leaders decades older and part of a vulnerable age group. Senate Majority Leader Mitch McConnell said Tuesday the decision follows the advice of health experts who urge people to continue social distancing. The House made a similar announcement on Monday.

The number of new positives for the coronavirus in Italy is at the lowest level in a month.

Italy’s civil protection agency reported 2,972 new cases of COVID-19 in the last 24 hours, the lowest number since March 13, when 2,547 cases were reported. Italy has registered a total 162,488 positives since the virus broke out on Feb. 21.

Deaths rose 2.9%, by 602 to 21,067. While the number of new cases and deaths continue to grow, pressure is easing on hospitals, with 74 fewer patients being treated and 12 fewer in intensive care.

A federal appeals court panel has ruled that medication abortions can be provided in Texas during the coronavirus pandemic. Texas Gov. Greg Abbott issued an executive order last month that bars non-essential medical procedures so that medical resources can go to treating coronavirus patients.

In a medication abortion a woman takes one pill at a clinic and then takes a second pill 24 to 48 hours later, typically at home. In a ruling Monday, a three-judge panel of the 5th U.S. Circuit Court Appeals said medication abortions can resume.  Also Monday, a different federal appeals court blocked Oklahoma from banning abortions during the pandemic.

This was supposed to be rebound year for dairy farmers embattled by at least four years of depressed milk prices — and then the coronavirus hit.

Schools, restaurants, institutions and universities closed to help slow the spread of the virus, wiping out much of the food service market that makes up for a big chunk of dairy farmers’ business.

Now farmers and cooperatives from Florida to Wisconsin to Maine are dumping milk because there are no plants that will take it and the price paid to farmers has collapsed again.

Plants set up to make food service products — like large packages of mozzarella cheese — aren’t able to pivot quickly and start churning out gallons of milk. Retail milk sales were up when the virus first hit as consumers bulked up on groceries but has declined since then, officials said.

Workers are still showing up in Inglewood, California, Las Vegas, Seattle and Columbus, Ohio, and making progress on stadium and arena projects. But work has mostly come to a halt at Belmont Park on Long Island, and in Austin, Texas.

The pandemic has affected sports construction projects in different ways across the country. Of the ongoing projects in the NFL, NHL and MLS, work has continued in some places under strict new guidelines while it has stopped in other locations, potentially changing the timelines for when the new venues can open.

The NHL will remain on pause through at least the end of the month.

The league on Tuesday announced it was extending its self-quarantine recommendation for players, coaches and staff through April 30. The announcement marks the third time the NHL has pushed back its timetable since suspending play on March 12 because of the new coronavirus.

Players and staff were previously given the opportunity to self-isolate at their offseason homes.

There is no timetable of when play might resume and whether the NHL will be able to complete the regular season or start the playoffs, which could stretch into September. There were 189 games remaining when play was suspended.

Florida judge: Get out of bed, get dressed for Zoom hearings

A Florida judge has one request for attorneys showing up for court hearings via Zoom: Get out of bed and put on some clothes!

Broward Circuit Judge Dennis Bailey made the plea in a letter published by the Weston Bar Association, news outlets reported.

“It is remarkable how many ATTORNEYS appear inappropriately on camera,” Bailey said in the letter. “One male lawyer appeared shirtless and one female attorney appeared still in bed, still under the covers.”

Bailey isn’t making any exceptions for lawyers lounging in the Florida sunshine, either.

“Putting on a beach cover-up won’t cover up you’re poolside in a bathing suit,” he wrote.

Since courthouses shut down on March 16 to help slow the coronavirus pandemic, Broward County’s judicial system has held about 1,200 Zoom meetings involving some 14,000 participants, WPLG-TV reported.

Bailey, for one, said he won’t hold a complicated trial over the video conferencing site, given the technology’s shortcomings.

“Often, lawyers are not looking at their screens but down at their files, their outlines and notes, or simply out the window, and cannot see the judge is hollering “Stop! Stop!” because an objection has been made and the audio stays with the witness rather than obeying the judge,” he said.