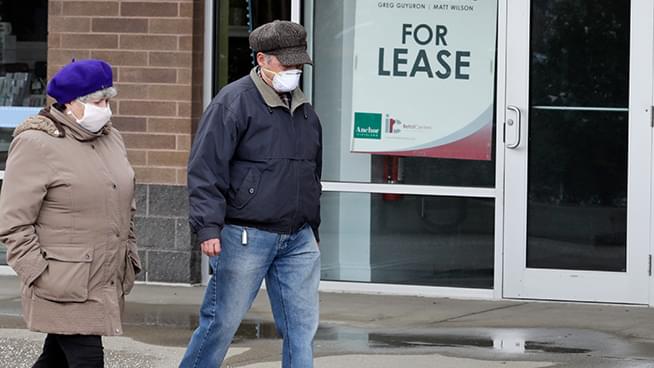 Two people walk past a closed storefront, Thursday, April 16, 2020, in University Heights, Ohio. Ohio has paid a record $227 million to more than 271,000 individuals who filed for unemployment in the past four weeks. Nationally, a record 22 million people have sought jobless benefits, including 5.2 million new claims reported Thursday. (AP Photo/Tony Dejak).

The ranks of Americans thrown out of work by the coronavirus have ballooned to at least 22 million. The economic pain is weighing heavily on leaders around the world. In the United States, where 5.2 million more people filed for unemployment benefits in the past week, President Donald Trump is preparing to announce guidelines to allow some states to reopen. In China, where the virus started, stores and restaurants are largely open, but customers are scarce.  Despite relief checks sent out this week to millions of Americans, some have begun to protest the virus restrictions that have closed factories and brought many small businesses to their knees.

Where’s your stimulus payment?  The glitches got it!

Many Americans woke up Wednesday expecting to find a payment of $1,200 or more from the U.S. government in their bank account, but instead they realized nothing had arrived yet — or the wrong amount was deposited. Parents of young children complained they did not receive the promised $500 check for their dependent children.

U.S. Treasury Secretary Steven Mnuchin has instructed the Internal Revenue Service to get payments out as fast as possible to help offset the pain of losing jobs and shutting down businesses, but numerous glitches are delaying payments and causing confusion.

Several million people who filed their taxes via H&R Block, TurboTax and other popular services were unable to get their payments because the IRS did not have their direct deposit information on file, according to the Treasury, companies and experts.

New guidelines expected soon from President Donald Trump are aiming to ease restrictions in areas with low transmission of the coronavirus. Current social distancing guidelines would remain in place for harder-hit states. But business leaders are telling Trump they need more coronavirus testing and personal protective equipment before people can safely go back to work. The industry executives are cautioning Trump that the return to normalcy will be anything but swift. While Trump’s guidelines are expected to be announced Thursday, the ultimate decisions will remain with governors.

Cuomo shuts down New York for another month

His decision comes as hospitalizations and intubations have fallen in the state, which reported 606 deaths on Wednesday, the lowest in 10 days.

The governor credited the shutdown for those signs that the outbreak may be stabilizing, and said extending it was needed to “control the beast” and drive the rate of infection lower.

“We have to continue doing what we’re doing,” Cuomo said, adding, “What happens after then? I don’t know. We will see depending on what the data shows.”

Decisions are being made in coordination with other states based on the infection and hospitalization rates, the governor said.

With a key coronavirus fund for small businesses now exhausted, negotiations are ramping up in Washington over a Trump administration request for $250 million to shore up that program. The Small Business Administration announced Thursday the paycheck protection program had reached its $349 billion funding limit and no more applications would be accepted. The program gives grants to small businesses so they can maintain payroll and pay rent during the virus outbreak. Both parties agree the fund needs to be replenished, but Democrats want to add money for hospitals and states and local governments dealing with the crisis. Republicans say those items can wait for future legislation.

The British government says a nationwide lockdown imposed to slow the spread of the new coronavirus will remain in place for at least three more weeks. Foreign Secretary Dominic Raab says “any change to our social distancing measures now would risk a significant increase in the spread of the virus.” The lockdown has been in place since March 23. Schools, pubs, restaurants and most shops are closed, and most people are allowed to leave home only for essential errands or exercise. Medical officials say the outbreak in the U.K. is reaching its peak but it’s too early to loosen restrictions on daily life.

Canada to keep its border with the U.S. closed

Trudeau says it will be “many weeks” before Canada can loosen such a restrictions.

President Donald Trump said Wednesday the U.S.-Canada border will be among the first borders to open and says the U.S. and Canada are doing well in handling the pandemic. The U.S. has more confirmed cases and deaths from COVID-19 than any country in the world.

The U.S. and Canada agreed last month to limit border crossings to essential travel amid the pandemic, but that agreement is due to expire April 19. Nearly 200,000 people cross that border daily in normal times.

Truck drivers and Canadian snowbirds, who live in the U.S. for part of the year and are returning to Canada, are among those who are exempted from the current travel ban. Canada sends 75% of its exports to the U.S. and about 18% of American exports go to Canada.

Before stay-at-home orders are lifted, the nation’s public health agencies want to be ready to douse any new sparks of coronavirus infection – a task they say could require tens of thousands more investigators. Many of those extra workers would help with so-called contract tracing, the critically important process of calling people who test positive, tracking down their contacts and getting them into quarantine. The exact number of workers needed is a subject of debate. But some agencies are so desperate they are considering recruiting librarians and Peace Corps volunteers to join the effort.

Africa to roll out more than 1 million coronavirus tests

The African Centers for Disease Control and Prevention says more than 1 million coronavirus tests will be rolled out starting next week in Africa to address the “big gap” in assessing the true number of cases. He says “maybe 15 million tests” will be required over the next three months. The initiative to dramatically accelerate testing comes as Africa’s 1.3 billion people brace for their turn in the pandemic. More than 17,000 cases have been confirmed but health officials have said the testing shortage means more exist. One projection estimates more than 10 million severe cases in the next six months.

The PGA Tour is laying out an ambitious plan to resume its season, with hopes of a restart at Colonial on June 11-14 and keeping fans away for at least the first month.

Tour officials said Thursday that if government and health authorities give golf the green light, the tour will have an official event every week through Dec. 6 except for the week of Thanksgiving.

PGA Tour Commissioner Jay Monahan said while the priority is health and safety for everyone involved, “our hope is to play a role – responsibly – in the world’s return to enjoying the things we love.”