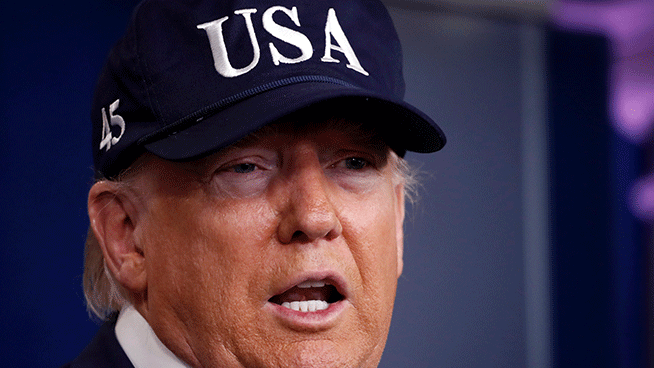 President Donald Trump has given governors a road map for recovering from the economic pain of the coronavirus pandemic, laying out “a phased and deliberate approach” to restoring normal activity in places that have strong testing and are seeing a decrease in COVID-19 cases.

The new guidelines are aimed at easing restrictions in areas with low transmission of the coronavirus, while holding the line in harder-hit locations. They make clear that the return to normalcy will be a far longer process than Trump initially envisioned, with federal officials warning that some social distancing measures may need to remain in place through the end of the year to prevent a new outbreak. And they largely reinforce plans already in the works by governors, who have primary responsibility for public health in their states.

“You’re going to call your own shots,” Trump told the governors Thursday afternoon in a conference call.  “We’re going to be standing alongside of you.”

Places with declining infections and strong testing would begin a three-phase gradual reopening of businesses and schools.

A major U.S. meat producer says four of its poultry workers in Georgia have died after becoming infected by the coronavirus. Tyson Foods spokesman Gary Mickelson confirmed Friday the deaths of four infected employees in the rural southwest Georgia city of Camilla. He said three of them worked in the company’s chicken processing plant there, while the fourth person was employed outside the plant at one of Tyson’s nearby support operations. The company said in a statement it is requiring workers to wear face masks, installing dividers at work stations and giving employees more space in break rooms.

President Trump sides with protesters calling for states to reopen

One day after laying out a roadmap for gradually reviving economic activity, President Donald Trump urged his supporters to “LIBERATE” three states led by Democratic governors Friday, in effect encouraging protests against the stay-at-home restrictions against the coronavirus.

The president took to Twitter with the kind of rhetoric some of his supporters have used to demand the lifting of the orders that have thrown millions of Americans out of work.

Further shifting the onus on to states, the president tweeted: “The States have to step up their TESTING!”

But some governors made it clear they are not ready to break out the roadmap, with some saying they badly need help from Washington in ramping up testing for the virus.

Lawmakers are struggling to break a stalemate over the Trump administration’s request for $250 billion to shore up the program. The Small Business Administration announced Thursday that the Paycheck Protection Program had reached its $349 billion funding limit and no more applications would be accepted. The program gives grants to small businesses so they can maintain payroll and pay rent during the virus outbreak. Both parties agree the fund needs to be replenished, but Democrats want to add money for hospitals and states and local governments dealing with the crisis. Republicans say those items can wait for future legislation.

New York City is starting to open new coronavirus testing sites for hard-hit communities, and residents throughout the state are facing new rules on covering their faces. Mayor Bill de Blasio announced Friday that five new walk-in testing sites will be open by Monday, with a focus on residents ages 65 and older in areas with high numbers of cases of the COVID-19 virus. Separately, five other new testing sites will be available to health care workers, among some other groups. Meanwhile, new rules requiring New Yorkers to cover their faces in public are going into effect Friday.

Schumer calls on federal government to step up testing program

Senate Minority Leader Charles E. Schumer (D-N.Y.) on Friday credited President Trump with putting forward a reopening plan that is “a little more measured” than he has previously advocated but argued that it still has a crucial deficiency.

“There’s a key thing missing in all of this.… It’s called testing,” Schumer said during an appearance on MSNBC’s “Morning Joe” program. “If we don’t have a strong, adequate testing regime, we’re going to have real trouble.”

Schumer’s comments came a day after Trump released federal guidelines for a three-phased reopening of businesses, schools and other gathering places in states and local jurisdictions that satisfy broad criteria on symptoms, cases and hospital loads.

“The testing regime is scattershot and totally inadequate for what’s needed to get the country back to work,” Schumer said. “Each state can’t come up with its own test.”

Some Florida beaches are reopening

Some North Florida beaches are re-opening, becoming among the first in the state since coronavirus concerns forced beach-goers away.

Mayor Lenny Curry said Duval County’s beaches will have restricted hours, and they can only be used for walking, biking, hiking, fishing, running, swimming, taking care of pets and surfing.

Gatherings of 50 or more people are prohibited and people must still practice social distancing.

Florida officials were criticized for leaving beaches open during spring break last month. Most counties closed their beaches in response or kept them open under very restrictive conditions.

A Tennessee church is challenging a local ban on drive-in church services, joining a growing list of lawsuits seeking to push back against limitations on religious gatherings that have been enacted to help prevent the spread of coronavirus.

A conservative legal group called Alliance Defending Freedom has filed a federal lawsuit on behalf of Metropolitan Tabernacle Church, based in Chattanooga. The complaints follow Chattanooga Mayor Andy Berke’s declaration that drive-in religious services would violate the city’s shelter-in-place directive that has been in place since April 2.

Chattanooga’s order comes as Gov. Bill Lee issued a statewide stay-at-home order until April 30. However, the Republican governor’s order does not restrict types of worship.

NASCAR has suspended its May 9 race at Martinsville Speedway and did not give an indication on when the season will resume.

When NASCAR suspended racing four events into the season, it listed the event in Virginia as its return date. But Virginia is under a stay-at-home order until June 10.

NASCAR in a statement said it is considering restarting the season without fans in May. It has privately told teams that NASCAR is hopeful to race May 24 at Charlotte Motor Speedway with the Coca-Cola 600.

“Our intention remains to run all 36 races, with a potential return to racing without fans in attendance in May at a date and location to be determined,” NASCAR said in a statement.

Another women’s golf major in doubt

Women’s golf has lost another senior major because of the coronavirus pandemic.

The Senior LPGA Championship has been canceled. It was scheduled to be played July 30-Aug. 1 at French Lick Resort in Indiana.

The Senior LPGA will stay at French Lick in 2021. The new dates will be determined later.