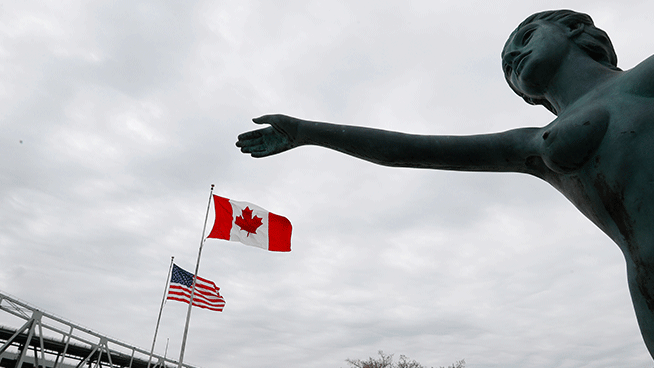 The Blue Water Maiden statue stands at the base of the Blue Water Bridge in Port Huron, Mich., which connects to Sarnia, Ontario, Canada, Wednesday, March 18, 2020. The Canada-U.S. border will be closed to non-essential traffic in both directions “by mutual consent,” the leaders of both countries confirmed Wednesday as efforts across the continent to contain COVID-19. (AP Photo/Paul Sancya).

Canadian Prime Minister Justin Trudeau says the U.S. and Canada have agreed to keep the border closed to nonessential travel for another 30 days.

Trudeau says it will keep people on both sides of the border safe amid the pandemic. U.S. President Donald Trump said Wednesday the U.S.-Canada border will be among the first borders to open. Nearly 200,000 people normally cross the border daily.

The U.S. has more confirmed cases and deaths from COVID-19 than any country in the world. The U.S. and Canada agreed last month to limit border crossings to essential travel amid the pandemic. The agreement was due to expire this week.

The daily increase in coronavirus deaths in New York state has dropped under 550 for the first time in over two weeks as hospitalizations continue to decline. But Gov. Andrew Cuomo warned Saturday that the crisis is far from over. Hospitals are still reporting nearly 2,000 new COVID-19 patients per day.

The state logged 540 deaths Friday from COVID-19, the lowest number since April 1. Nearly 13,000 New Yorkers in all have died since the state’s first coronavirus case was reported March 1.

Model projects 4 US states could reopen by May 4

A university modeling institute is forecasting specific reopening dates for states shut down by the coronavirus pandemic. The recommendations are based on projections for when each state’s infections will drop below one per 1 million people. The University of Washington’s Institute for Health Metrics and Evaluation says Hawaii, Montana, Vermont and West Virginia could open by May 4, if they restrict large gatherings, test widely and quarantine the contacts of people who test positive. The model says Arkansas, Florida, Georgia, Iowa, Nebraska, North Dakota, Oklahoma and South Dakota would need to wait until late June or early July.

More than a dozen Iowa elected officials implored Tyson Fresh Meats to close their Waterloo pork processing plant, saying the coronavirus is spreading among workers and is endangering not only employees of the plant but the entire community. Mayors, county officials and state legislators signed the letter that was sent to Tyson on Thursday. The 19 officials said at a Friday news conference they had only received confirmation from the company that it had received the letter but no other action .The officials also accused Gov. Kim Reynolds of misleading Iowans on the seriousness of the outbreak and for failure to take action to close the plant.

The Health Ministry in Italy says there were 3,491 new coronavirus cases, nearly identical to the previous day increase in confirmed infections.

There were 482 more deaths, raising the overall official toll to 23,227 in Italy, which has Europe’s highest number of deaths.

The country is approaching the end of its sixth week of nationwide lockdown, with people allowed out of their homes only for essential work or buying food and tending to family members.

Colina tested positive on Friday and the department has since then appointed Deputy Chief Ronald Papier as the acting police chief, CNN affiliate WSVN reported.

“My spirits are high and I have every reason to believe that I will have a full recovery,” Colina said in a statement shared with the news station. He added that his symptoms were mild.

“I am following our internal policies and entering self-isolation until follow-up tests determine that I am no longer at risk for spreading the virus to coworkers,” he said.

A Michigan prisoner who declined to be paroled earlier this year after decades behind bars has died from COVID-19 complications.

William Garrison died at a hospital after nearly 44 years in prison. The coronavirus outbreak has infected more than 500 inmates in Michigan prisons and killed 17.

The 60-year-old Garrison was sentenced to life in prison for killing a man during a 1976 robbery when Garrison was 16 years old. He could have been paroled two weeks ago but decided to wait until September, when he would be eligible for a complete release without the rigors of parole supervision,  the Detroit Free Press reported.

The parole board approved his application in March.

The CEOs of Walmart and its Sam’s Club wholesale stores made the announcement in a statement Friday.

“We will begin requiring that associates wear masks or other face coverings at work. This includes our stores, clubs, distribution and fulfillment centers, as well as in our corporate offices,” it said.

Customers will also be encouraged to cover their faces, although it will not be mandatory. Walmart will provide all employees with a face covering, or they can bring their own.

“We hope this step will promote safety and consistency across all of our facilities and be of comfort to our customers and members. However, it’s important to remember that face coverings are simply an additional health precaution. They do not guarantee against the spread of this virus,” the statement said.

With the beaches in Florida closed in an effort to stop the spread of coronavirus, researchers are seeing less plastic and waste, fewer people and vehicles on the beach and less disorientation for emerging hatchlings that’s caused by artificial lights on the beach, David Godfrey, Executive Director for the Sea Turtle Conservancy told CNN.

And because of these factors, the sea turtles are able to build without any disruptions.

Nesting season for leatherback turtles, the largest of all sea turtles, is underway right now mostly in the central east and southeast coast of Florida, according to Godfrey. They nest in fewer numbers than the loggerheads, who arrive in May.  Later in the summer months is when green turtles will arrive.

It takes about 60 days for sea turtle eggs to incubate and for hatchlings to emerge, Godfrey said.

But during that time on an active beach, lots of things can happen to that nest — it can get trampled, people can dig it up, and artificial light can harm the hatchlings.

With an inactive beach, the situation might be quite different.

“I think there is a strong likelihood that we will see decreased human-caused impacts on sea turtle nesting this year, which is a rare silver lining to this global pandemic,” Godfrey said.

“It’s premature to try and use numbers to demonstrate what we all think and hope is happening. The numbers just aren’t there yet. I hear that the season is going pretty well so far, it’s off to a good start.”

Less foot traffic helps the reptiles right now, but what will happen when the beaches reopen and the sea turtles’ eggs begin to hatch? Godfrey said researchers are working in uncharted territory and only time will tell.

In the United States alone, the coronavirus outbreak has left more than 37,000 people dead and sickened nearly 710,000. California is one of the hardest-hit states, with about 30,000 cases of infection and more than 1,000 people killed.

Under the effort that starts Monday, deployed medical teams will focus on people living on the streets and provide them with rapid-results coronavirus tests, regular health and welfare screenings, counseling and transportation to shelters and hotels, Los Angeles Mayor Eric Garcetti said Friday.

Additional resources will be sent to the city’s Skid Row, and will include nursing staff, mental health workers and case managers. They’ll provide the homeless population there with face coverings and other necessary items while working to take them off the streets, the mayor said.