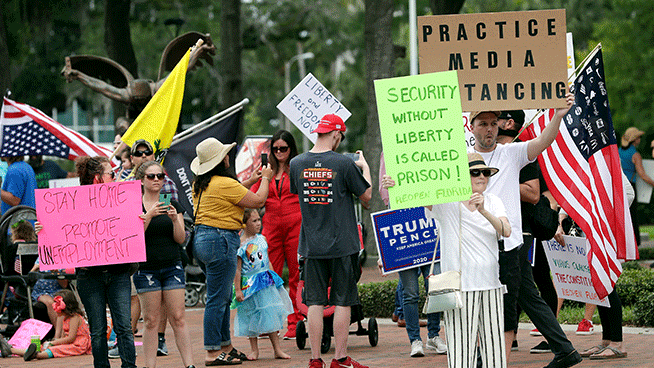 Aerial snapshots of people flocking to a reopened beach in Jacksonville, Fla., made waves on the Internet on Saturday, though the city’s mayor said officials saw no issues in the evening as more stay-at-home-weary souls gathered.

Local news aired photos and videos of Florida’s shoreline dotted with people, closer than six feet apart, spurring #FloridaMorons to trend on Twitter after Gov. Ron DeSantis (R) gave the go-ahead for local beachfront governments to decide whether to reopen their beaches during a news briefing Friday.

Duval and St. Johns counties have reopened their beaches, while Miami-Dade County officials said they are considering following suit.

US governors feel heat to reopen from protesters, president

Governors eager to rescue their economies and feeling heat from President Donald Trump are moving to ease restrictions meant to control the spread of the coronavirus. They are acting even as new hot spots emerge and experts warn that moving too fast could prove disastrous. Adding to the pressure are protests against stay-at-home orders organized by small-government groups and Trump supporters. They staged demonstrations Saturday in several cities after the president urged them to “liberate” three states led by Democratic governors. Protests happened in Republican-led states, too. Meanwhile, infections kept surging in the Northeast.

Masks for all in the Navajo nation

The Navajo Nation is ordering all people on the tribe’s sprawling reservation to wear protective masks when out in public to help fight the spread of the coronavirus.

Tribal officials announced Friday night that the Navajo Department of Health issued an emergency health order for the reservation, which includes parts of Arizona, New Mexico and Utah.

The Navajo Nation has been hit harder by the coronavirus than any other Native American tribe.

The tribe and the Navajo Area Indian Health Service said the number of positive coronavirus tests reached 1,127 as of Friday with 44 deaths attributed to COVID-19.

California to leave the light on for the homeless

California is on its way to acquiring 15,000 hotel rooms to house the homeless during the pandemic, said Gov. Gavin Newsom on Saturday as he reminded people to stay indoors while outbreaks continue to crop up throughout the state.

Standing in front of a Motel 6 outside the city of San Jose, Newsom said more than 4,000 people have been moved out of shelters and off the streets and into motel rooms. He took the opportunity to scold leaders of unnamed cities for blocking efforts to house the homeless, asking them to “please consider the morality” of their decisions.

His announcement came a day after the state reported another 87 deaths from the coronavirus. Meanwhile, California’s death toll from the virus rose above 1,050 on Saturday, according to a tally by John Hopkins University.

Coronavirus deaths down in NY, but officials urge vigilance

The coronavirus death toll in New York dropped again, a sign that Gov. Andrew Cuomo said Sunday means the state is “on the other side of the plateau” and that ongoing social distancing practices are working to stem the spread of the virus.

Cuomo said 507 people died on Saturday, down 43 from the previous day. Hospitalizations and other medical indicators are trending downward.

But Cuomo and Mayor Bill de Blasio maintained their warnings that people in New York City and the rest of the state need to stay vigilant to curb the spread of the virus.

The Trump administration and Congress are nearing an agreement as early as Sunday on an aid package of up to $450 billion to boost a small-business loan program that has run out of money and add funds for hospitals and COVID-19 testing.

With small-business owners reeling during a coronavirus outbreak that has shuttered much economic activity, Treasury Secretary Steven Mnuchin said he was hopeful of a deal that could pass Congress quickly and get the Small Business Administration program back up by midweek.

Under the proposed deal, the government’s Paycheck Protection Program for small businesses would get roughly $300 billion, according to Mnuchin. The program has been swamped by businesses applying for loans and reached its appropriations limit last Thursday after approving nearly 1.7 million loans. That left thousands of small businesses in limbo as they sought help. An additional $50 billion in the evolving deal would go for disaster loans.

About $75 billion would go to U.S. hospitals, for those straining under a ballooning coronavirus caseload as well as those struggling to stay financially afloat after suspending elective surgeries during the pandemic. About $25 billion would be added for COVID-19 testing, something states have said was urgently needed. The money for hospitals and testing were priorities sought by congressional Democrats.

Some of the world’s top stars have helped to raise nearly $128 million for the World Health Organization during the coronavirus pandemic by performing in a concert broadcast globally.

Dozens of celebrities and musicians, including Lady Gaga, Stevie Wonder and the Rolling Stones, took part in the 8-hour show called “One World: Together At Home.”

Global Citizen, an international advocacy group that organized the event, said early Sunday on Twitter that $127.9 million had been pledged in donations.

The proceeds will be given to the WHO’s Covid-19 Solidarity Response Fund.

The concert was divided into two parts, a 6-hour “pre-show” and a main 2-hour show hosted by Jimmy Fallon, Jimmy Kimmel and Stephen Colbert.

Is it safe to open mail and packages during the pandemic?

Is it safe to open mail and packages during the pandemic?

There is no evidence that COVID-19 is spreading through mail or parcels, according to the World Health Organization and U.S. Centers for Disease Control and Prevention.

Most of it is spread from droplets produced when an infected person coughs or sneezes, which are inhaled by people nearby.

Health experts say the risks are very low that COVID-19 will remain on envelopes or packages and infect anyone who handles them.

It’s still a good idea to wash your hands thoroughly and regularly — and avoid touching your face — after handling deliveries.

Like many businesses, the U.S. Postal Service has limited visitors to its facilities and asks that anyone who comes to the post office to stand at least 6 feet away from another person.

Passengers on a luxury liner’s around-the-world cruise, begun before the globe was gripped by the coronavirus pandemic, are finally approaching the end of their odyssey after 15 weeks at sea.

The ship, the Costa Deliziosa, was heading Sunday toward a port in Spain before ending its journey in Italy — both countries devastated by the coronavirus outbreak.

Costa Crociere, an Italian cruise company, said that the Deliziosa, which set sail from Venice in early January with 1,831 passengers, had no cases of COVID-19 aboard.

The Deliziosa, a nearly 300-meter (1,000-foot) vessel, will disembark 168 Spanish passengers on Monday at Barcelona’s port. Then the Deliziosa will head to its final destination, Genoa, Italy, where it is expected to let off the remaining passengers, Italians and those of other nationalities, on Wednesday.

Because of the coronavirus, the 25th anniversary of the Oklahoma City bombing is being remembered with a tribute video instead of a ceremony.

Survivors and loved ones of the 168 people who were killed in the Oklahoma City bombing were not able to gather Sunday to mark the 25th anniversary of the attack, but that did not stop them from remembering.

Because the annual remembrance ceremony was canceled due to coronavirus restrictions, those the victims instead were honored with a video tribute that included the reading of the names of those who died followed by 168 seconds of silence.

Ordinarily, the city would have gathered Sunday at the memorial where the Alfred P. Murrah Federal Building stood before it was destroyed by a truck bomb on April 19, 1995. Gates to the memorial mark time, 9:01 and 9:03 a.m., with a reflection pond between them representing 9:02, the minute the explosion permanently altered lives and the nation. Stylized, empty metal chairs represent each person who died, and the “Survivor Tree,” a gnarled American elm that withstood the blast, now stands on a small hill and shades the memorial below.

It was “extremely difficult” to not be able to attend in person, said Ryan Whicher, whose father, U.S. Secret Service Agent Alan Whicher, was killed in the bombing. “I’m not with my sisters today, I’m not with my mother today,” in Oklahoma City, he said by phone from Baltimore, where he now lives.

With coronavirus severely affecting the potato supply chain, a farm in Idaho is giving away about 2 million potatoes so they don’t go to waste. First come, first served.

Ryan Cranney, CEO of Cranney Farms in Oakley, Idaho, about 150 miles from Boise, told CNN the majority of his potatoes from the farm are typically sold to grocery stores and to restaurants to make french fries.

Because of stay-at-home orders throughout the nation, Cranney said the food service demand is down significantly, leaving him with six months worth of crop.

Initially, Cranney said he posted about the crop on Facebook, urging members of his community of about 700 people to show up at the farm and grab as many potatoes as they want. But now, people are driving hours to pick some up.

“The response has completely blown me away,” Cranney said. “People are coming from all over the place.”

Cranney said he’s expecting a woman from Kansas on Thursday who will have driven 19 hours. Food banks and soup kitchens are also starting to show up.

Coronavirus is dealing a gut punch to the illegal drug trade, paralyzing economies, closing borders and severing supply chains in China that traffickers rely on for the chemicals to make such profitable drugs as methamphetamine and fentanyl.

One of the main suppliers that shut down is in Wuhan, the epicenter of the global outbreak.

“They are facing a supply problem and a demand problem,” said Alejandro Hope, a security analyst and former official with CISEN, the Mexican intelligence agency. “Once you get them to the market, who are you going to sell to?”

Virtually every illicit drug has been impacted, with supply chain disruptions at both the wholesale and retail level. Traffickers are stockpiling narcotics and cash along the border, and the U.S. Drug Enforcement Administration even reports a decrease in money laundering and online drug sales on the so-called dark web.

“The godfathers of the cartels are scrambling,” said Phil Jordan, a former director of the DEA’s El Paso Intelligence Center.

Cocaine prices are up 20 percent or more in some cities. Heroin has become harder to find in Denver and Chicago, while supplies of fentanyl are falling in Houston and Philadelphia. In Los Angeles, the price of methamphetamine has more than doubled in recent weeks to $1,800 per pound.