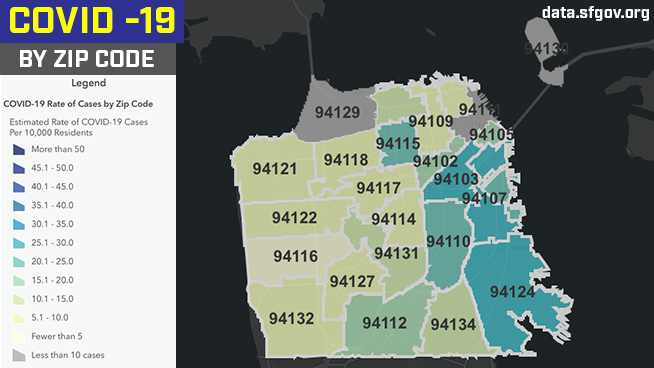 Monday morning San Francisco’s mayor, London Breed, tweeted out a link to a heat map of the current confirmed cases of COIVD-19 based on ZIP code.

This tweet is congruent with California and San Francisco’s philosophy of science, data, and information first. Unfortunately, the map shows that neighborhoods with large minority populations are disproportionally affected by the Coronavirus.

“What it reflects is the existing health disparities and inequality that existed within our city before COVID-19, which is why we continue to focus on protecting our most vulnerable residents.” Breed said in a tweet.

Today we released a map of confirmed COVID-19 cases by zipcode.

What it reflects is the existing health disparities and inequality that existed within our city before COVID-19, which is why we continue to focus on protecting our most vulnerable residents. https://t.co/humGUThpxl

The mayor pointed out that so far the city’s Latino population has been hit the hardest. Currently 25% of all SF cases are Latino despite only making up 15% of the population. Additionally, 80% of patients at the Zuckerberg General Hospital are Latino in comparison to representing 30% normally.

The city is attempting to mitigate this by using it’s equity task force to reach out to community leaders and to ensure information about the virus is available in Spanish and many other languages. There was also an emphasis that illegal members of the community should not be scared to reach out for help.

“Immigration status has no bearing whatsoever on the work or whether people will receive care here in San Francisco. We are after all a sanctuary city,” San Francisco Public Health Director Dr. Grant Colfax said.

Both the mayor and Dr. Colfax were quick to point out the alignment of cases to neighborhoods deeply affected by poor health coverage, poverty, and racism.

“This map is sobering, but unfortunately not surprising,” Dr. Colfax said. “We must make progress in reducing the Coronavirus everywhere in the city or we will not emerge from this pandemic.” 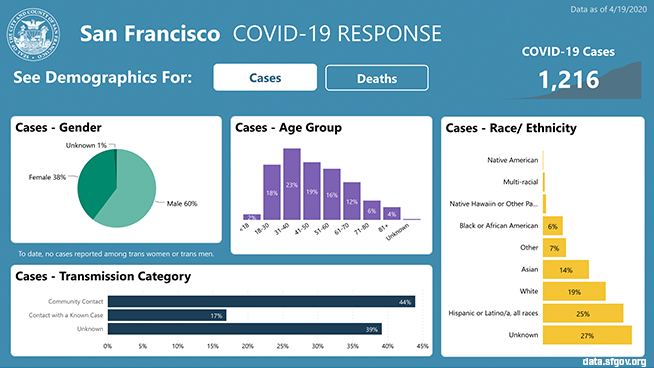 The doctor also highlighted that neighborhoods with high homeless populations were being hit disproportionally hard. The 94107 ZIP code is one of the highest densities of cases in San Francisco. This is because of the outbreak of 96 cases at the MSC South Shelter, the largest shelter on the West Cost. The city passed a bill last week to shelter approximately 7,000 homeless in vacant hotel rooms to alleviate the dangers of congregate living situations in this moment. To date the HSH (Department of Homelessness & Supportive Housing) has successfully placed over 750 people from these communities.

This heat map is showing that a crisis, such as the pandemic we face today, is exacerbating systemic issues of race, poverty, and healthcare. However, Breed stressed that low case numbers in your neighborhood does not make you safer and is not a reason to ignore public health orders.

“[This map] in no way indicates that some parts of our city is safer than the others,” Breed stressed. “This is really about gathering more information and providing the public with everything we have and so that you understand how important it is to continue to take the precautions we are asking you to do.”

The map does show confirmed cases by zip code and is based only on those who have been tested (11,254) however this does not show the total number of cases due to lack of testing. This means that only 12.7% of the San Francisco population (883,305) have been tested so far.

So far San Francisco has 1,216 confirmed cases in and 20 deaths.

The tracker can be found here.