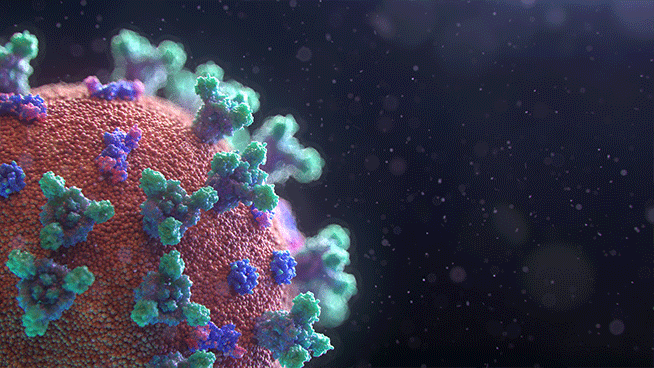 Johns Hopkins University researchers say the global death toll from the coronavirus has surpassed 200,000. A tentative easing around the world of restrictions is gathering pace with the reopening in India of neighborhood stores that many of the country’s 1.3 billion people rely on for basic goods.

The relaxation of the Indian lockdown did not apply to hundreds of quarantined towns or shopping malls.

The U.S. states of Georgia, Oklahoma and Alaska also began loosening lockdown orders on their pandemic-wounded businesses. Italy said free protective masks will be distributed to nursing homes, police, public officials and transport workers, preparing for the return to work of millions when lockdown restrictions are eased from May 4.

Officials say the top Navy officer has recommended the reinstatement of the aircraft carrier captain fired for sending a fraught email to commanders pleading for faster action to protect his crew from a coronavirus outbreak.

Adm. Mike Gilday has recommended that Navy Capt. Brett Crozier be returned to his ship.  Gilday met with Gen. Mark Milley, chairman of the Joint Chiefs of Staff, on Tuesday and with Defense Secretary Mark Esper on Friday morning to lay out his recommendations. An official says Esper has asked for a delay in any public announcement while he considers the recommendation.

A handful of Texas businesses have reopened in defiance of state guidance in the fight against the coronavirus, which now allows retailers to offer “to go” service but leaves other restrictions in place. In Dallas on Friday, hair salon owner Shelley Luther was issued a citation but refused to close her business. A Houston-area restaurant opened to customers who wanted to eat inside, demarcating available tables by tablecloth color in an effort to ensure social distancing. Salons and dine-in restaurant service are not yet allowed under a series of orders intended to restart the economy that Texas Gov. Greg Abbott announced earlier this month.

Health officials have ordered the immediate closure of a Walmart in suburban Denver after three people connected to the store died after being infected with the coronavirus and at least six employees tested positive.

The health department said the store didn’t adhere to social distancing requirements under Colorado’s stay-at-home order that allows some businesses deemed essential, like the Walmart, to remain open.

Besides the six other confirmed cases, three employees suspected of having COVID-19 are awaiting test results.

Walmart said in a statement that the store’s temporary closure would allow it to be cleaned and sanitized.

New York is starting to test healthcare workers for coronavirus antibodies and will do the same next week with transit and law enforcement workers as the state eases away from the worst days of the pandemic.

Gov. Andrew Cuomo said Saturday that doctors, nurses and other employees at four New York City hospitals that have handled high volumes of coronavirus patients will be the first tested under the new program.

Making such testing widely available is seen as a key to reopening society, but the World Health Organization on Saturday warned there is currently no evidence that people who have antibodies are protected from coronavirus.

NASA: Do not come to Florida for SpaceX’s historic astronaut launch

The head of NASA is urging space enthusiasts not to show up to Florida for the launch of SpaceX’s first crewed mission next month.

The historic launch, slated for May 27, will be broadcast online, and NASA Administrator Jim Bridenstine said that is where the general public should plan to watch astronauts Douglas Hurley and Robert Behnken fly into space atop a SpaceX rocket.

It will mark NASA’s first human spaceflight launch from US soil in nearly a decade.

Bridenstine said NASA and SpaceX are pushing forward with the mission amid the pandemic because it is critical for the space agency to maintain normal operations on board the International Space Station, where rotating crews of astronauts have lived since 2000.

NASA said it is not inviting any spectators to the launch site at Kennedy Space Center.

In Brevard County, Florida, county officials are also discouraging tourists from showing up to the area’s beaches and other popular launch viewing sites.

Ballots cast in person in Maryland’s special congressional election won’t be tabulated and released for about 24 hours after polls close – to give potential germs a chance to die to protect poll workers. It’s one of the safety measures that’s being taken in an unprecedented Maryland election on Tuesday during the coronavirus pandemic.

Only three places for in-person voting will be open. Election officials are urging eligible voters to mail in their ballots to decide who will serve the rest of the term of the late Elijah Cummings.

Despite risks, auto workers step up to make medical gear

Hundreds of workers at Ford, General Motors, Toyota and other companies have offered to work in a wartime-like effort to stem shortages of protective medical gear and equipment.

Even though most of their factories are shut down to slow the spread of coronavirus, they have stepped up to help fill a critical shortage. Many would get most of their pay even if they stayed at home.

Ford worker Cindy Parkhurst says she’s helping to make face shields with hopes that they find their way to the hospital where nurses treated her mother with compassion after a stroke 15 years ago.

Kimberly Wieneke says she knew she loved 2-year-old Jaden the minute he came into her family’s life.

Wieneke and her husband have been foster parents for over a year and Jaden has been with them since last May, according to CNN affiliate KNWA.

They found out Jaden was going to be put up for adoption in February.

They knew that day would be a special one and started making plans. But the Coronavirus pandemic meant those plans had to change.

The pandemic altered daily life in the US — and around the world — including how court hearings are conducted.

Many are now done online, and Wieneke realized Jaden’s adoption would be no different.

Instead, Jaden’s adoption hearing took place via a Zoom video call. But Wieneke said the adoption was no less special.

Pope Francis has singled out funeral home workers for people’s prayers during the COVID-19 pandemic.

In Italy and some other countries, the deaths of people with coronavirus infections have meant funeral parlor workers must deal with the grief of families who aren’t allowed to hold public funerals as part of government-ordered measures to try to contain the pandemic.

Francis says, “What they do is so heavy and sad. They really feel the pain of this pandemic so close.”

The pope made the appeal for prayers during morning Mass on Saturday in the Vatican City hotel where he resides.

In past remarks, the pope has cited others for doing what he called heroic work during the pandemic, including doctors, nurses, supermarket clerks and transport workers.

The Vatican has its own lockdown, barring the public from its museums and religious ceremonies. It has reported nine coronavirus cases among the residents or employees of the walled, independent Vatican City State.

In an effort to raise money to produce face masks during the coronavirus pandemic, legendary musician Willie Nelson will auction off face masks he has signed.

Tanya Boike, who was at Willie Nelson’s performance at the Houston rodeo days before the major event shut down due to the pandemic, and nurse Monica Cabazos started making the masks to help their community, and have reportedly distributed more than 500 masks.

Boike, who is friends with Nelson’s granddaughter Noelle Ward, offered a few of the masks to her family, including Willie Nelson.

The auction for the masks is set for April 25, and the funds from the auction will go to helping Boike and Cabazos sew more masks to give out.

Opera houses and theaters might be shut down, but The Atlanta Opera is not staying quiet.

They are putting their “show must go on” attitude to good use by gathering their ensemble to help others during the pandemic.

Instead of receiving standing ovations from theater crowds, performers are now providing operas for one by recording special “Singing Telegrams” for those in need.

Members of The Atlanta Opera Chorus and The Atlanta Opera Studio are recording these “Singing Telegrams” for those in senior living facilities, health care workers, hospital patients or anyone in need of emotional support.