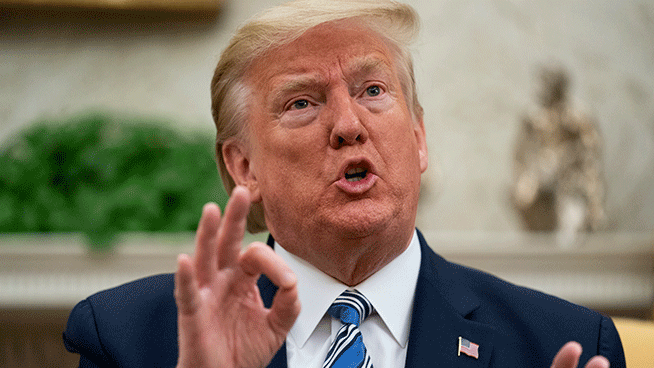 President Donald Trump speaks during a meeting with Gov. Ron DeSantis, R-Fla., on the coronavirus response, in the Oval Office of the White House, Tuesday, April 28, 2020, in Washington. (AP Photo/Evan Vucci).

President Donald Trump will sign an executive order Tuesday meant to stave off a shortage of chicken, pork and other meat on American supermarket shelves because of the coronavirus.

The order will use the Defense Production Act to classify meat processing as a critical industry to ensure that production plants stay open.

The order comes after industry leaders warned that consumers could see meat shortages in a matter of days after workers at major facilities tested positive for the virus. A senior White House official outlined the order on condition of anonymity to discuss it before its release.

President Donald Trump says his administration is talking to the airline industry about giving passengers temperature checks and testing them for the coronavirus.

Trump also says it “sounds like a good idea” for passengers to be wearing a face mask while on the plane.

The comments come as Trump meets at the White House with Republican Governor Ron DeSantis of Florida about that state’s plans for loosening restrictions on the economy put into place as a result of the pandemic.

Florida health authorities have attributed many of the state’s COVID-19 cases to people traveling from other hot spots, including Europe, Nile river cruises, the New York City area and Latin America.

DeSantis tells Trump that his state’s ability to test people for the virus exceeds current demand and that moving to the first phase of reopening the economy should not be a heavy lift.

Businesses should close break rooms. Restaurants should consider disposable menus and plates. Schools should have students eat lunch in their classrooms.

These are some of the recommendations offered in new federal plans designed to help restaurants, schools, churches and businesses safely reopen as states look to gradually lift their coronavirus restrictions.

The draft guidance from the Centers for Disease Control and Prevention has been sent to Washington but still could be revised before the Trump administration unveils it to the public. The recommendations were obtained from a federal official who was not authorized to release them publicly.

The new guidance still amounts to little more than advice. State and local officials will be the ones to adopt and enforce them.

President Donald Trump says states should “seriously consider” reopening their public schools before the end of the academic year, even though dozens already have said it would be unsafe for students to return until the summer or fall.

Trump made the comments Monday in a call with governors discussing how to reopen their economies, among other topics.

None of the governors on the call responded to the suggestion, according to a recording obtained by The Associated Press.

Trump made the comments as the Centers for Disease Control and Prevention worked to finalize guidelines for reopening the economy. For schools, that included putting students’ desks 6 feet apart, serving meals in the classroom instead of the cafeteria and closing playgrounds.

Reopening schools is considered key to getting the economy moving again. Without a safe place for their kids, many parents would have difficulty returning to work.

But some education officials say opening schools quickly would bring major risk and little reward, especially since the end of the school year is approaching.

Trump says virus testing ‘not a problem,’ but doubts persist

The White House has released new guidelines aimed at answering criticism that America’s coronavirus testing has been too slow, and President Donald Trump is trying to pivot toward a focus on “reopening” the nation. The new testing targets would ensure states had enough COVID-19 tests available to sample at least 2.6% of their populations each month – a figure already met by a majority of states. Areas that have been harder hit by the virus would be able to test at double that rate, or higher. Still, there are doubts from public health experts that the White House’s new testing targets are sufficient.

As states gear up to reopen, a poll finds a potential obstacle to controlling the coronavirus: nearly 1 in 10 adults say cost would keep them from seeking help if they thought they were infected.

The Gallup-West Health Healthcare Costs Survey out Tuesday finds that 9% of those age 18 and over would avoid seeking treatment because of concerns about the cost of care, even if they thought they were infected with the coronavirus.

A significantly higher number, 14%, would avoid seeking treatment because of pocketbook worries if they had fever and a dry cough, two widely publicized symptoms of COVID-19.

Although Congress and President Donald Trump have made coronavirus testing free to patients, and some insurers are waiving copays and deductibles for treatment within their networks, the survey suggests such messages may not be getting to the public.

Business and health industry groups are urging lawmakers to shore up health insurance coverage for unemployed Americans in the next coronavirus bill.

The U.S. Chamber of Commerce, the American Hospital Association and the insurance lobby America’s Health Insurance Plans are calling for lawmakers to put aside bitter political differences over “Obamacare” and provide support for keeping people insured as millions lose coverage in a shuttered economy.

The Trump administration has instead said it will reimburse hospitals for caring for uninsured COVID-19 patients, from a pot of money Congress approved.

The three groups wrote congressional leaders of both parties that more ambitious steps are needed to make sure re-opening the economy goes smoothly.

The pandemic is messing with our concept of time

If it feels like your brain is turning into mush, you’re not alone. Experts say it all has to do with how the pandemic is affecting our cognitive health — meaning, our ability to clearly think, learn and remember.

Because work is home and home is work for many people, some may find themselves working longer hours or into the weekends. Gone are the happy hours, concerts or sporting events that once separated weekdays from weekends, causing the days to just drag on.

For those who still need to go into work, routines may look a lot different. And there’s the added mental strain of remembering to socially distance, wear masks and avoid touching surfaces. All of that can contribute to a sense of disorientation.

Another reason we can’t keep track of the days?

We’re multitasking a lot more. Many people are finding themselves balancing multiple responsibilities, such as homeschooling children or caring for an elderly family member — all while holding down a full-time job or coping with the stress of a layoff.

So what can we do about all this?

The psychiatrists and psychologists we spoke to recommended trying to maintain a sense of structure, to the extent possible. Going to bed and waking up at the same time each day is one strategy.

Kjetil and Zoe Njoten live four houses away from Erik and Jen Strom in the Los Angeles area, but the couples had never talked beyond the occasional “Hi” or a friendly wave.

They bonded — from a safe distance — at an impromptu neighborhood get-together this month over their shared Norwegian heritage.

They joked that maybe the family came from Njoten Island, which can be pronounced like “Newton.” The island is only home to a couple dozen people.

“Wouldn’t it be even crazier if we were actually related, somehow,” Erik Strom said.

Strom said he called his mom to check their family history book, which traces her lineage back to the 1700s.

She texted a picture of his great-great-grandfather. His last name was also Njoten.

They sent that information to Kjetil Njoten’s mom, who was able to confirm the family connection.

It turns out that Kjetil Njoten and Erik Strom have the same great-great grandfather.

They’re looking forward to spending more time together once the safer-at-home restrictions are lifted.

An official says the British government’s virus contact tracing app will be ready in two to three weeks.

Britain and many other countries are developing mobile apps to help reduce infections after they ease lockdown restrictions.

He told Parliament’s science and technology select committee the rollout will be part of a wider post-lockdown strategy that includes expanded testing.

The app will use Bluetooth signals to anonymously log when a user comes into close contact with others. The data is kept on devices. But if users later develop COVID-19 symptoms or get positive test result, they can choose to upload the data to a central server so those contacts can be alerted.

Gould says such an approach would maintain user privacy while allowing authorities to see any patterns in the movement of the virus.