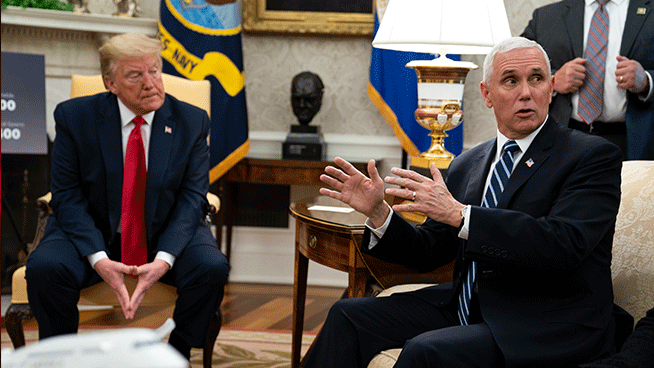 President Donald Trump says the federal government will not be extending its social distancing guidelines when they expire Thursday at the end of the month.

Trump told reporters in the Oval Office that the coronavirus guidelines will be “fading out” because of work that governors are doing in their states.

Vice President Mike Pence said the guidelines issued 45 days ago have been incorporated into guidance provided to the states on how they can begin the process of gradually reopening their economies.

The guidelines – which were originally supposed to last 15 days and were then extended another 30 – included encouraging Americans to work from home and avoid restaurants and discretionary travel as well as telling older Americans and those with serious underlying health conditions to isolate themselves.

…but Louisiana extends to May 15th

They’re considering the extraordinary step of trying to override the Democratic governor’s emergency decision-making about the state’s coronavirus outbreak.

Edwards is in Washington for a meeting with President Donald Trump about Louisiana’s response to the COVID-19 disease.

Meanwhile, some GOP legislators – primarily in the House – are trying to rally support for a rare legal maneuver that would allow them to overturn possibly some or all of the governor’s disaster orders and proclamations.

The governor’s office says that would put millions of dollars in federal aid at risk.

Feds give cleaning and disinfecting tips for schools and workplaces

Federal authorities are giving cleaning and disinfecting tips for schools and workplaces to help deal with the coronavirus.

The guidelines urge Americans to draw up plans to clean areas with soap and water and disinfectant. Recommendations include ensuring custodians have proper protective gear.

Cleaning workplaces and schools will be part of reopening after weeks and months of lockdown from the outbreak. The shutdown has thrown tens of millions of Americans out of work and sent the U.S. economy plunging.

Republican state leaders in Oklahoma and Utah are facing scrutiny over the spending of millions of dollars combined to purchase malaria drugs to treat COVID-19 patients that many other states obtained for free and that doctors warned shouldn’t be used without more testing.  Oklahoma Gov. Kevin Stitt defended the state’s $2 million purchase, saying the drug was showing some promise. Top officials in both states chalked up the decisions to “the fog of war.” Utah Gov. Gary Herbert at first defended the state’s $800,000 purchase but has since ordered an investigation of the contract and halted a plan to spend $8 million to buy more.

Former Vice President Joe Biden has won Ohio’s presidential primary. Tuesday’s contest was less about the Democratic nomination and more about how states can conduct elections in the era of the coronavirus. The primary was originally scheduled for March 17, but Republican Gov. Mike DeWine cited a “health emergency” and recommended that in-person balloting not be held until June 2. Amid legal challenges, officials pushed balloting to this week while converting to a mail-in process since the state remains under a stay-at-home order.

British Airways lays off a quarter of its workforce

British Airways is set to cut as many as 12,000 jobs — about one quarter of its overall workforce — as the coronavirus pandemic continues to all but eliminate air travel.

The airline’s parent company, IAG, said on Tuesday it needed to impose a “restructuring and redundancy” program until passengers start traveling again as often they did last year.

Globally, the airline industry is bleeding billions of dollars in cash, as some carriers face bankruptcy, other seek government aid and more than half of all passenger aircraft have been grounded due to shuttered borders.

With nearly 23,000 of the airline’s employees already furloughed, IAG said the worst is yet to come. The company did not receive a government bailout, and analysts predict air travel will take several years to return to pre-pandemic levels.

The coronavirus outbreak has already closed theaters, blocked or delayed the release of new movies – and shut down production. Now, it’s also affecting which films can be eligible for Oscars. The Motion Picture Academy is tweaking its rules for next year’s ceremony because so few films will make it into theaters this year. The new rules say movies that made their debut on a streaming service or on DVD can be up for Oscar nods. In the past, the rules were that a movie must run at least a week in a commercial theater in Los Angeles County to be eligible. The academy says the change is for this year only.

While the organizers of Lollapalooza are trying to figure out whether this year’s festival will go on, they’re opening the vaults to show footage of past performances. Twice a week, the Lollapalooza YouTube channel will stream sets from past Lollapaloozas, including the ones staged overseas. Tomorrow, it will debut The Strokes from their 2010 set in Chicago. On Sunday, it will be Alesso from 2019 in Chicago. Lollapalooza usually is the first weekend in August in Chicago. Organizers say they’re in touch with local government and health officials about how to proceed this year. A lineup has not been announced.

People familiar with the discussions tell The Associated Press that Major League Baseball is exploring various options that could allow the season to start if the medical situation allows.

Included is a plan in which the 30 teams could be split into three regional divisions. Teams could be restricted to playing within their region, but they would be able to play half their games in their home ballparks.

That idea, if used, would break up the traditional alignments of the American and National Leagues. It also would cut travel.  The season could start in late June, following a “spring training” period.

Italy is bracing for a second wave

Italy’s head of the coronavirus pandemic strategy says the country is prepared for the second wave of infections “even bigger than the first” if its gradual reopening leads to a surge in new cases.Italy’s 20 regions now have twice as many ventilators than currently needed and the 5,200 intensive care beds Italy had before the pandemic had nearly doubled to 9,000.

Italy, the European epicenter of the pandemic with more than 27,000 dead, entered the crisis with a fraction of the ICU capacity compared to other developed nations.

Beds in sub-intensive care have increased six-fold, the same increase in Italy’s bed capacity in infectious disease and pneumology wards.

Italy’s planned reopening begins on May 4.

Greece gets serious about social distancing

Greek authorities say the use of face masks will be compulsory – on pain of a 150-euro ($163) fine – in public transport and shops from May 4, when the country starts to ease its lockdown restrictions. But they’ll be optional in schools when secondary school children start returning to class from May 11.

Classes will have no more than 15 children kept 1.5 meters (about 5 feet) apart, while larger classes will be split up and attend lessons on alternate days, education officials say.

Coronavirus task force chief Sotiris Tsiodras said it’s important for children to return to normal life as far as possible, adding that while transmission of the virus from children to adults can’t be ruled out, “it seems to be unusual.”

Germany expects to social distance into next year

Four leading scientific research organizations in Germany say some measures imposed to curb the rate of coronavirus infections will need to remain in place until a vaccine is found or herd immunity is achieved.

They say in a joint statement that their mathematical models independently show the reproduction rate of the outbreak has been below 1 in Germany since the end of March. This means every person confirmed with COVID-19 infected fewer than one other person over the past month.

The organization warned “the situation is not stable, even a small increase in the reproduction rate would lead us back into a phase of exponential growth.”

They say striving for herd immunity, where so many people acquire immunity that the virus is effectively stopped from spreading through the population, would require “several years.” Experts say a vaccine likely won’t be available until next year.

52 who worked or voted in Wisconsin election have COVID-19

More than 50 people who voted in person or worked the polls during Wisconsin’s election earlier this month have tested positive for COVID-19 so far. But there are no plans to move or otherwise alter a special congressional election coming in less than two weeks. The state Department of Health Services reported the latest figures on Tuesday, three weeks after the April 7 presidential primary. Democratic Gov. Tony Evers tried to move to a mail-order election but was blocked by the Republican Legislature and conservative controlled Wisconsin Supreme Court. He’s made no such move to alter an upcoming May 12 special congressional election in a mostly rural district.

Economists agree: No quick rebound from recession is likely

Devastated by the coronavirus, the U.S. economy is sinking. And the plunge is accelerating. Now, as some businesses in a few states start to trickle back to work, hopes are beginning to arise that the economy, damaged as it is, might be poised to rebound by the second half of the year. If more employees and consumers were to gradually return to working and spending, the idea goes, the economy might be able to mount a sharp comeback. Yet most economists have the same response: Keep such expectations in check. Among their concerns is that the coronavirus could flare up again after the economy is re-opened, forcing reopened businesses to shut down again.

Costco to require masks for all shoppers

Costco is requiring customers to wear face masks or coverings in its stores beginning May 4.

The company is the largest US retailer to enact the rule, which is aimed at helping prevent the spread of Covid-19. Costco said the face coverings must be worn “at all times” in the store and will not serve as a “substitute for social distancing.”

Certain exemptions are applied, including for customers under 2-years-old and people who can’t wear one because of a medical condition.

Costco has enacted a number of changes to its stores as shoppers flock to big box stores for necessities during the pandemic. Other changes include earlier closing times, limiting the number of guests a member can bring and giving first responders and healthcare workers priority admittance into warehouses.

Walmart said in a statement that customer and employee safety is a “top priority” and it’s recommending, not requiring, customers wear face coverings.

The Women’s PGA Championship has been rescheduled for Oct. 6-11. The major championship was to be played from June 23-28 at Aronimink Golf Club in Pennsylvania but was postponed because of the coronavirus outbreak.

The PGA Championship is one of five women’s majors. Two others are based in the U.S., the ANA Inspiration and the U.S. Women’s Open. Both have already been rescheduled.

The Evian Championship and the Women’s British Open are both scheduled for August and so far have not been postponed.