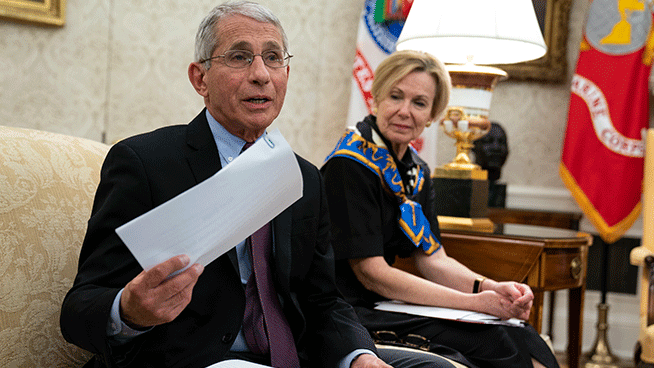 Anthony Fauci tells NBC’s “Today” show Thursday that he anticipates the go-ahead for the emergency use of Remdesivir to happen “really quickly.”

He says he spoke with FDA Commissioner Stephen Hahn on Wednesday, and while Hahn had yet to make a final decision, “I would project that we’re going to be seeing that reasonably soon.” The drug was shown in a major study to shorten recovery time of hospitalized patients.

Fauci said the drug’s manufacturer has committed to scaling production of the drug as quickly as possible as the world hunts for an effective treatment and ultimately a vaccine.

Aneesh Mehta said Thursday on ABC’s “Good Morning America” that “we are looking to find a medication that helps patients get better more rapidly, get them home to their families and make more room for other patients for us to take care of.”

He adds: “I think now we have the first glimmer of hope of something that can do that.”

Mehta cautions that the Remdesivir data is “very preliminary.” He says most antivirals tend to work better earlier in the course of disease.

30 million have sought US unemployment aid since virus hit

More than 3.8 million laid-off workers applied for unemployment benefits last week as the U.S. economy slid further into a crisis that is becoming the most devastating since the 1930s. Roughly 30.3 million people have now filed for jobless aid in the six weeks since the coronavirus outbreak began forcing millions of employers to close their doors and slash their workforces. That is more people than live in the New York and Chicago metropolitan areas combined, and it’s by far the worst string of layoffs on record. It adds up to more than one in six American workers.

Surf’s down in California: Governor set to close beaches

Gov. Gavin Newsom intends to close all California beaches and state parks starting Friday in the wake of a weekend that saw a crush of people at open seashores. The order comes as some communities reopened their beaches and pressure builds to cautiously begin easing stay-at-home restrictions that have throttled the state’s economy and kept millions at home to prevent the spread of the coronavirus.

The federal government’s social distancing guidelines are soon to expire, and President Donald Trump says he’s not extending them. Trump’s adviser and son-in-law, Jared Kushner, is predicting that the country will be “really rocking again” by July. Adding to their optimistic view of the coronavirus outbreak, the president is planning his first long trip in weeks with a visit next week to Arizona. Yet the number of reported coronavirus infections and the number of deaths caused by COVID-19 continue to rise. More than 60,000 deaths in the U.S. have been attributed to the coronavirus. The White House’s “30 Days to Slow the Spread” guidelines expire Thursday.

Economists agree: No quick rebound from recession is likely

Hopes are beginning to arise that the U.S. economy might be poised to rebound by the second half of the year. The idea is that the economy might be able to mount a sharp comeback if more employees and consumers were to gradually return to working and spending. Yet most economists say such expectations should be kept in check. Among their concerns is that the coronavirus could flare up again after the economy is re-opened, forcing reopened businesses to shut down again. Another is that people will remain too wary of contracting the coronavirus to return to anything resembling normal economic behavior.

Over 70% of tested inmates in federal prisons have COVID-19

The response from the federal Bureau of Prisons to the growing coronavirus crisis has raised alarm among advocates and lawmakers about whether the agency is doing enough to ensure the safety of the nearly 150,000 inmates serving time in federal facilities.  New figures provided by the Bureau of Prisons show that out of 2,700 tests systemwide, 2,000 have come back positive, strongly suggesting there are far more COVID-19 cases left uncovered.

NYC subway will halt early morning service due to virus

Gov. Andrew Cuomo says New York City is shutting down its subway system each day from 1 a.m. to 5 a.m. to increase cleaning of trains and stations during the coronavirus crisis. Subway trains, which had been disinfected at least once every 72 hours, will now be cleaned once every 24 hours. Cuomo said Thursday that buses, vans and other alternative transportation will be provided at no charge to to essential workers while the subway is closed. Meanwhile, a Navy hospital ship is leaving New York City a month after it was sent to relieve stress on hospitals at the height of the coronavirus pandemic. The USNS Comfort treated just 182 people as a surge in cases in the hard-hit city fell short of the worst-case projections.

Crowds gathered on the Capitol lawn while drivers leaned on horns as they traveled past. This was a repeat of what occurred April 15 but with fewer numbers.

The signs said, “Shut down the lockdown” and “No work no freedom.” Some wore the “Don’t Tread On Me” flag as a cape.

Whitmer, a Democrat, wants Republican lawmakers to stretch her emergency declaration by 28 days to ensure that health care workers continue to have special legal protections.

U.S. intelligence agencies have concluded that the new coronavirus was “not manmade or genetically modified.” But they say they’re still examining whether the origins of the pandemic trace to contact with infected animals or an accident at a Chinese lab. The statement came Thursday from the Office of the Director of National Intelligence, the clearinghouse for the web of U.S. spy agencies. It comes as President Donald Trump and his allies have touted the as-yet-unproven theory that an infectious disease lab in Wuhan, the epicenter of the Chinese outbreak, was the source of the global pandemic that has killed more than 220,000 worldwide.

This is his quest: An actor serenades the front-line workers

NEW YORK (AP) – Theaters are shuttered, but somehow, Brian Stokes Mitchell has found a way to keep singing on Broadway. The veteran stage star with a velvety baritone opens his apartment window every night – fittingly on Broadway, a few miles up from the theater district – and sings his signature song, “The Impossible Dream,” to honor health-care and other front-line workers in New York. Sometimes, ambulance or fire crews get out of their vehicles to watch. Mitchell’s quest is personal; he recently recovered from a tough bout with the coronavirus. The message of his nightly serenades: beating the virus is not an impossible dream.