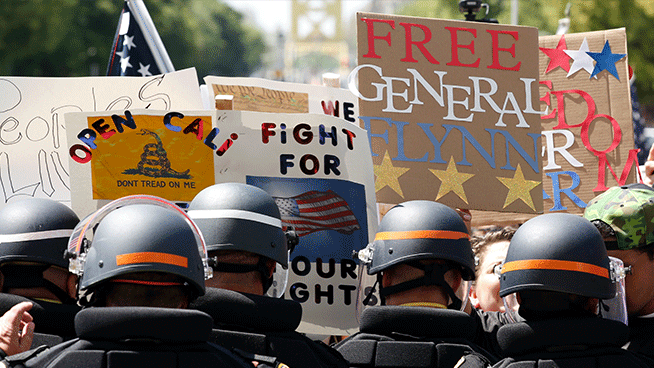 A line of California Highway Patrol officers confront protesters calling for the end of Gov Gavin Newsom’s stay-at-home orders aimed at slowing the spread of the new coronavirus at the state Capitol in Sacramento, Calif., Friday, May 1, 2020. Several people were taken into custody during the protest calling for Newsom to end the restrictions and allow people return to work. (AP Photo/Rich Pedroncelli).

President Donald Trump says he’s hoping that the total number of COVID-19 deaths in the United States will be below 100,000.

Even that, he acknowledged on Friday, is a “horrible number.”

At a White House event on Friday, Trump said “maybe millions of lives” have been saved by shutting down the economy.

A large crowd gathered Friday in Huntington Beach, California, to protest the governor’s order to close all beaches in Orange County to prevent the spread of the coronavirus.

The large crowd was packed near the popular Huntington Beach Pier. Most of them didn’t have masks, despite recommendations from public health officials that people must wear masks and socially distance in public.

California Gov. Gavin Newsom urged the protesters to take care of themselves.  “This disease doesn’t know if you’re a protester, a Democrat, a Republican,” the governor said at a press conference Friday. “Protect yourself, protect your family, your kids, your parents, your grandparents, your neighbors.”

An Orange County judge rejected a request from local officials to block Newsom’s order closing the beaches in the county to slow the spread of the coronavirus.

US allows use of 1st drug shown to help virus recovery

U.S. regulators will allow emergency use of the first drug that appears to help some coronavirus patients recover faster. President Donald Trump announced the move Friday after preliminary results from a government-sponsored study showed that the drug remdesivir shortened the time to recovery for hospitalized COVID-19 patients. The drug also might be reducing deaths, although that’s not certain from the partial results revealed so far. Drugmaker Gilead Sciences has said it will donate its currently available stock of the drug and is ramping up production to make more.

Health official says US missed some chances to slow virus

A top health official says the U.S. government was slow to understand how much coronavirus was spreading from travelers from Europe, which helped drive the acceleration of outbreaks. The No. 2 official at the U.S. Centers for Disease Control and Prevention published an article Friday that suggested limited testing and delayed travel alerts for areas outside China contributed to the jump in cases in the U.S. Some public health experts saw it as important assessment by one of the nation’s most respected public health doctors.

As more states begin to relax their coronavirus lockdowns, most are falling short of the minimum levels of testing suggested by the federal government and recommended by a variety of public health researchers, an Associated Press analysis has found.

Three months into an unprecedented public health emergency, the White House has largely resisted calls for a coordinated plan to conduct the millions of tests experts say are needed to contain the virus. What federal officials outlined recently isn’t even an official benchmark, and AP’s analysis found that a majority of states are not yet meeting it.

In many states, testing has been limited to hospitalized patients, high-risk individuals and front-line workers. But most public health experts agree that containing the virus will require a massive expansion of testing that eventually includes millions of patients without symptoms, which is not happening now.

Officers set out on foot, bicycles and cars to break up crowds and remind everyone of public health restrictions requiring they keep 6 feet away from others.

The New York City Police Department has made 60 arrests and issued 343 summonses related to social distancing since March 16. Police Commissioner Dermot Shea issued a stern warning after a series of clashes this week between police officers and members of orthodox Jewish communities over social distancing.

A group of Maryland residents demonstrated against Gov. Larry Hogan’s stay-at-home order Saturday by embarking on a caravan from the western part of the state to the lower Eastern Shore. A group known as “ReOpen Maryland” organized the protest against the governor’s mandates for social distancing and other measures designed to protect against the spread of the coronavirus.

The virus has killed more than 1,100 people in the state. Hogan has also ordered the closure of all nonessential businesses. Protesters planned a handful of events as they drove from Frederick to Salisbury. Group members said they would follow social distancing guidelines by remaining in their cars.

Police in Delaware say Gov. John Carney’s order requiring people to wear face coverings in public during the coronavirus pandemic is mostly being observed, but not everyone has been willing to comply. In Cheswold, a Valero patron who was rebuffed by a clerk for not wearing a mask kicked and shattered a glass door on Tuesday.

The Delaware State News reports that multiple other police departments and businesses said most people were complying with the order. Delaware State Police spokeswoman Master Cpl. Melissa Jaffe said a person who refuses requests to leave a business could possibly be charged with third-degree trespassing or disorderly conduct.

Farmers markets scaling down with eye on safety due to virus

Farmers, growers and operators of open-air markets are heading into one of their busiest times of year while facing the added challenge of the coronavirus

The disease has led to stay-at-home orders and the closure of nonessential businesses in many places, and has killed more than 60,000 people in the U.S. and at least 230,000 worldwide. Shoppers venturing to farmers markets this spring are likely to see a lot fewer vendors and fellow customers.

The ones they do see will be taking precautions such as the wearing of face masks and frequent use of hand sanitizer. Some markets are turning to drive-thru shopping, reducing their hours of operation and using fencing for crowd control.

Gary McDowell, director of the Michigan Department of Agriculture and Rural Development, said Saturday in a release that the changes will strengthen the supply chain and make workers safer but could “lead to some near-term speedbumps.” He was responding to concerns of food shortages due to national shutdowns of beef and pork producers.

Mary Kelpinski, chief executive officer of the Michigan Pork Producers Association, says there’s plenty of meat in cold storage around the state but advised shoppers to resist panic buying of meat products in the weeks ahead.

With the 146th Kentucky Derby being postponed until September 5 because of the coronavirus pandemic, horse racing fans are being treated to a virtual horse race featuring the past 13 Triple Crown winners.

NBC will broadcast the 2015 Kentucky Derby, which was the start of American Pharoah’s Triple Crown run, on May 2 starting at 3 p.m. ET.

“The Kentucky Derby: Triple Crown Showdown” will follow the broadcast of the 2015 Kentucky Derby. The virtual race will be using data algorithms and historical handicapping information about each horse to determine the probability of each of their potential finishing positions.

“For many fans around the country, the first Saturday in May has become a part of their family’s yearly traditions,” said Kevin Flanery, president of Churchill Downs Racetrack. “While we eagerly look forward to the 146th Kentucky Derby this year on the first Saturday in September, we will celebrate the annual excitement of our traditional date with our fans and community by offering ways for us to join together for a great cause.”

Even as the pandemic era takes on the appearance of a comic — desolate urban centers, masks everywhere — the ink-and-paper industry is at a standstill that some believe jeopardizes its future, casting doubt on how many shops will make it through and what might befall the gathering places of proud nerds, geeks and readers everywhere.

Saturday would have been Free Comic Book Day, an annual nationwide event intended to bring die-hards and newbies alike into stores. Instead, stores are closed nationwide and new print issues haven’t been released since late March, when the industry’s primary distributor, Diamond Comic Distributors, shut down.

Normally, some 6 million extra comics are distributed for the day and around 1.2 million people flock to stores. For some shops, it dwarfs even Comic-Con, the annual San Diego convention (also canceled ). Joe Field, owner of Flying Color Comics in Concord, California, who came up with the holiday, calls it “the single biggest retail day in the comic book industry.”

According to the Chicago Sun-Times, a mask adorning one of the iconic lion statues near the Michigan Avenue entrance to the Art Institute disappeared about 24 hours after it was applied.

Good news for the lion, though. By Friday afternoon, it got a new mask like the one the other lion nearby is wearing. But to make it tougher for thieves to steal them, the new mask and the one on the other lion are are now held on with cables that are a lot tougher to cut.

Police are investigating the theft and are looking for two men whom a security guard saw get out of a black Chevrolet, climb onto one of the statutes and cut the mask from the lion’s head.

The large-scale masks were installed early Thursday to remind people to follow a statewide mandate that started Friday requiring people to wear masks in public places during the coronavirus crisis. The Picasso statue in nearby Daley Plaza is also wearing one.