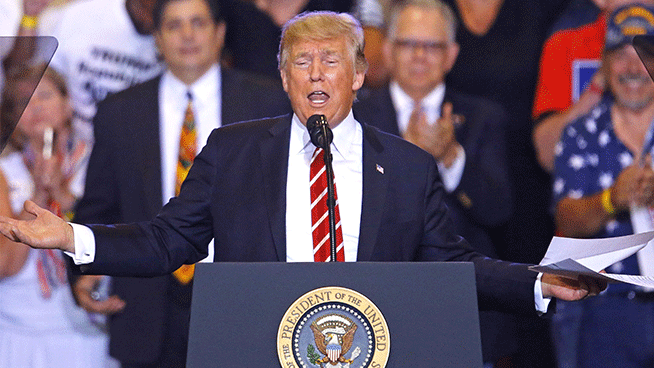 Two known cases of COVID-19 among staffers in one of the most-protected complexes in America have sent three of the nation’s top medical experts into quarantine and Vice President Mike Pence into “self-isolation.” The scare comes as the White House this week is emphasizing to the American people the steps being taken to assure their safety — in hopes that will coax them to resume normal activities.

“This week – you’ll hear the @WhiteHouse talk about preparedness & confidence,” tweeted Alyssa Farah, the White House director of strategic communications. “The Trump Admin is working around the clock to build our testing capacity, grow our PPE stockpiles, distribute therapeutics, & get $ to states to SAFELY reopen in a way Americans can have CONFIDENCE in.”

Pence on Monday led the White House’s weekly call with governors from an isolated room, after his press secretary tested positive Friday. Dr. Deborah Birx and other staffers participated as usual from a conference room in the Situation Room, Pence said, explaining the “slightly different circumstance.”

The stepped-up protective measures comes as Dr. Anthony Fauci, the director of the National Institute of Allergy and Infectious Diseases, Dr. Robert Redfield, director of the CDC, and the commissioner of the Food and Drug Administration, Dr. Stephen Hahn, were all quarantining after exposure to the White House staffer.

The White House is recommending that all nursing home residents and staff be tested for the new coronavirus in the next two weeks.

Dr. Deborah Birx, the task force coordinator, told governors to focus over the next two weeks on testing all 1 million nursing home residents. She says the White House will help states that need it.

Nursing homes and the elderly have been shown to be especially susceptible to the virus.

The first-term Democrat’s office released a statement Monday saying all employees, including Pritzker, will work from home “for an appropriate isolation period.” The statement didn’t specify how long that would last.

The office says the staff member was asymptomatic, but tested positive last week and was in close proximity to the governor. Pritzker and all other staff have tested negative.

Roughly 20 administration officials have been working from a downtown Chicago office building where Pritkzer was holding daily news conferences during the pandemic.

Gov. Andrew Cuomo says several regions of upstate New York that have shown progress in taming the coronavirus outbreak are ready to gradually restart economic activity by the end of the week. Cuomo shut down the entire state March 22 as the New York City area emerged as a global pandemic hot spot, but the outbreak has been less severe in the state’s smaller cities and rural areas.

The governor said three upstate regions have met all criteria for opening some business activity after May 15: the Southern Tier, Mohawk Valley and the Finger Lakes.

As countries restart, WHO warns about lack of virus tracing

A top world health official is warning  that countries are essentially driving blind in reopening their economies without setting up strong contact tracing to beat back flareups of the coronavirus.

The World Health Organization’s Dr. Michael Ryan said Monday that some countries that are now reopening don’t have strong enough contact-tracing systems to detect and stop virus flareups early on.

He declined to name any specific countries he saw as deficient, but praised Germany and South Korea’s robust systems. On Monday, France and Belgium emerged from lockdowns, and a number of U.S. states continued to lift business restrictions meant to blunt the virus.

The entire Walt Disney World resort is currently closed until further notice because of the ongoing coronavirus pandemic. However, Disney Springs will reopen in phases starting May 20th.

What our emoji usage says about life in isolation

The folded hands emoji has popped up in more tweets than ever before to help express our feelings about seemingly every aspect of a health crisis that can sometimes defy words. It’s used to give thanks to frontline workers, send prayers to loved ones and express gratitude for finding toilet paper on supermarket shelves.

The emoji, sometimes called prayer hands, was used 25% more often in April than in August, the last time that particular character was analyzed by Emojipedia, which tracks trends and frequency of emoji use on Twitter. That spike made it the eighth most popular emoji for the month — and cemented its position as a visual emblem for how we feel during the pandemic.

As coronavirus cases ticked up and and lockdowns spread around the world, the way we communicate evolved quickly. Water-cooler conversations were replaced by Slack chats. Happy hours and birthday parties now unfold on Zoom. Phone calls made a comeback. And people are increasingly relying on emoji to express their thoughts and gestures to an audience they can no longer see in person.

Nearly one in five tweets now include an emoji, up from about one in six tweets during same time last year, according to Emojipedia. Icons such as the face with a medical mask, the microbe and a bar of soap have also spiked in messages specifically associated with the coronavirus. Usage of the ✈️ emoji and ⚾ are down, as people stay inside their homes more.

A person familiar with the decision tells The Associated Press that Major League Baseball owners have given the go-ahead to making a proposal to the players’ union that could lead to the coronavirus-delayed season starting around the Fourth of July weekend in ballparks without fans.

The plan Monday envisions expanding the designated hitter to the National League for 2020. Spring training would start in early to mid-June. Each team would play about 82 regular-season games, most against opponents in its own division. Postseason play would be expanded from 10 clubs to 14 by doubling wild cards in each league to four.

The American Hockey League has canceled the rest of its season because of the coronavirus pandemic.

President and CEO David Andrews says “the resumption and completion of the 2019-20 season is not feasible in light of current conditions.”

The league’s board of governors made that determination in a conference call Friday.

The AHL suspended its season on March 12 after the NHL did. The league hopes to be back next season but that is in jeopardy if sports must be played in empty arenas.