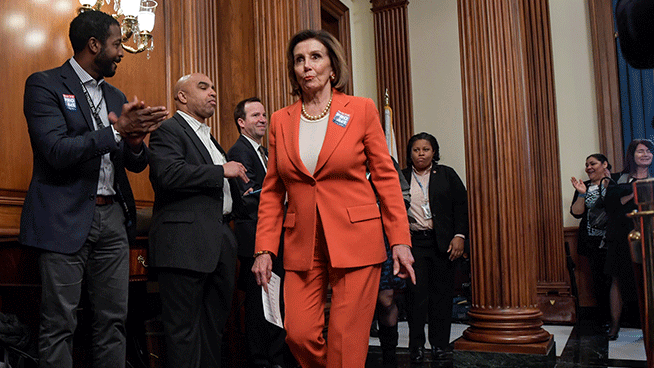 The Heroes Act provides nearly $1 trillion for states, cities and tribal governments to avert layoffs and another $200 billion in “hazard pay” for essential workers, according a summary. It will offer $1,200 direct cash aid to individuals, up to $6,000 per household. There is $75 billion more for virus testing .

A vote is expected Friday.

Majority Leader Steny Hoyer said Tuesday it appears the sweeping Democratic-led bill “will be ready” to call lawmakers back to Washington for the vote.

But the legislation is heading straight into a Senate roadblock. Senate Republicans are not planning to vote on any new relief until June, after a Memorial Day recess.

Senate Majority Leader Mitch McConnell says there is no “urgency” to act.

Neither President Trump nor his predecessor President Obama are responsible for the lack of a coronavirus vaccine, Dr. Anthony Fauci said.

He was responding to GOP Sen. Mitt Romney’s question about President Trump’s recent suggestion that Obama was responsible for the lack of a vaccine.

“The President said the other day that President Obama is responsible for lack of vaccine. Dr. Fauci, is President Obama — or by extension President Trump — did they do something that made the likelihood of creating the vaccine less likely?” Romney asked.

“Certainly President Obama nor President Trump are not responsible for not having a vaccine,” Fauci said.

He added that the US has moved “rapidly” from discovering the virus to having trials for vaccines.

Romney then added that he was “surprised” by Trump’s suggestion.

“That was my impression. I was surprised by the comment,” he said.

Trump faces virus at White House amid push to ‘reopen’ US

President Donald Trump is insisting his administration has “met the moment” and “prevailed” on coronavirus testing. The president addressed a Rose Garden audience filled with mask-wearing administration officials on Monday after two known cases of COVID-19 were reported among staffers in one of the most protected complexes in America. Trump said anew that everyone who wants a test can get one, though officials later clarified that to everyone who “needs” a test. Trump commented even as the White House itself became a potent symbol of the risk facing Americans everywhere by belatedly ordering everyone who enters the West Wing to wear a mask.

“We have many candidates and hope to have many winners,” he told the Senate Health, Education, Labor and Pension committee. “In other words, it is many shots on goal.”

Despite the rapid pace of work on vaccines, Fauci was offering no guarantees. He says, “The big unknown is efficacy.”

Fauci heads the National Institute of Allergy and Infectious Diseases and is the government’s leading expert on the pandemic. He says he hopes to have a vaccine in advanced trials by late fall or early winter.

Counterfeit face masks that provide inadequate COVID-19 protection have been distributed to frontline health care workers across the country. An Associated Press investigation has tracked the masks to a U.S.-certified factory in China where legitimate medical masks are made.

Adding to the confusion, millions of masks now considered inadequate for medical protection entered the U.S. and are now in use because of the federal government’s relaxed standards. Meanwhile state and local governments, hospitals, private caregivers and well wishers have spent hundreds of millions of dollars on the flawed masks. Before the pandemic, N95 masks sold for about 60 cents each. Today they’re priced as high as $6 apiece.

According to Health Ministry data, 1,033 cases were confirmed in Lombardy since Monday evening, accounting for the majority of Italy’s 1,402 new cases. In contrast, the last few days had seen Lombardy’s daily new caseload running in the few hundreds.

Authorities registered 172 deaths in infected patients in the 24-hour period ending Tuesday evening, raising to 30,911 the confirmed death toll. Nearly half of those deaths have occurred in Lombardy, where the country’s outbreak began in late February.

Mayor Bill de Blasio says a total of 52 children in New York City have been diagnosed with an inflammatory syndrome possibly linked to COVID-19 and another 10 cases are pending. The mayor said Tuesday that of those 62 confirmed or possible cases, 25 have tested positive for the coronavirus and another 22 had antibodies for the virus.

One child has died. Children elsewhere in the U.S. and in Europe also have been hospitalized with the syndrome. The shutdown on Broadway has been extended again – until at least early September. Broadway producers are now offering refunds and exchanges for shows through Sept. 6.

Disney is not throwing away its shot with “Hamilton.”

It’s fast tracking the premiere of the filmed version of the original Broadway production. It’ll now stream on Disney+ on July 3.

Miranda, Seller, and Kail, serve as producers on the film and Kail directs.

The shutdown on Broadway has been extended again – until at least early September. Although an exact date for performances to resume has yet to be determined, Broadway producers are now offering refunds and exchanges for tickets purchased for shows through Sept. 6.

Broadway theaters abruptly closed on March 12, knocking out all shows – including 16 that were still scheduled to open – and postponing indefinitely the Tony Award schedule. Broadway grossed $1.8 billion last season and attracted a record 15 million people. Producers and labor unions are discussing ways theaters can reopen safely.

Virginia Gov. Ralph Northam is delaying northern Virginia’s reopening amid the coronavirus outbreak until at least May 29, two weeks after the rest of the state is expected to reopen. Northam said Tuesday he’s signed an executive order extending mandated closures and restrictions on businesses in northern Virginia, a heavily populated area where regional officials have said they’re not yet ready to reopen.

Northam ordered some businesses closed two months ago and his planned first phase of reopening will retain severe restrictions.

Nebraska is holding the nation’s first in-person primary since a heavily criticized election in Wisconsin five weeks ago in the middle of the coronavirus pandemic. Polling places in the Omaha area appeared largely quiet Tuesday, in part because election officials have repeatedly urged voters to cast early, mail-in ballots.

Despite that, Republican Gov. Pete Ricketts and Secretary of State Bob Evnen both pledged to forge ahead with an in-person primary even though many other states have rescheduled theirs or switched to all-mail voting. Ricketts says members of the Nebraska National Guard will provide on call help at short-staffed polling sites in eight counties, including the Omaha and Lincoln areas.

Tesla CEO Elon Musk has emerged as a champion of defying stay-home orders intended to stop the coronavirus from spreading, picking up support as well as critics on social media. Among supporters was President Donald Trump, who on Tuesday tweeted that Tesla’s San Francisco Bay Area factory should be allowed to open despite health department orders to stay closed except for basic operations.

Trump wrote that the plant can be reopened safely, joining many of Musk’s 34 million Twitter followers who back the defiance. Tesla’s factory reopened Monday with Musk daring local authorities to arrest him. The plant apparently continued operations on Tuesday, and it wasn’t clear whether Tesla met a 5 p.m. PDT deadline to submit a plan to protect workers.

The Wall Street Journal reports that Uber is considering acquiring Grubhub in a deal that would give the companies control over a majority of the U.S. food delivery business. Citing anonymous sources, the newspaper says Uber approached Grubhub earlier this year with an all-stock takeover offer.

Uber’s board will reportedly consider the deal this week. Uber and Grubhub declined to comment on the report to The Associated Press. Combined, Uber Eats and Grubhub would control 55% of the U.S. food delivery market, according to Wedbush Securities. DoorDash, their chief competitor, controls around 35% of the market.

Churchill Downs has released a preliminary list of races that could be used as an extension of the Road to the Kentucky Derby prep schedule, pending agreement by the host tracks.

The 146th Derby has been rescheduled for Sept. 5 from its traditional spot on the first Saturday in May because of the coronavirus pandemic. The Preakness and Belmont, which are the other legs of the Triple Crown series, have yet to be rescheduled.