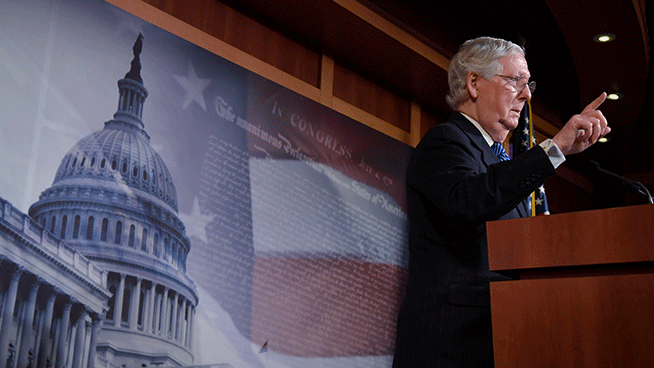 Senate Majority Leader Mitch McConnell says that House Democrats’ $3 trillion economic relief bill is a “totally unserious effort.” The criticism by the Kentucky Republican underscores Washington’s deep election-year gulch over what Congress’ next response to the crisis should be. Pelosi unveiled the bill on Tuesday.

It would be Congress’ fifth and largest package for nursing the dormant economy through the emergency and bolstering the nation’s medical response to the deadly coronavirus. Eventually the Republican-led Senate and the Democratic-controlled House are expected to negotiate over a fresh relief bill. The House plans to approve the measure Friday in what will be a largely party-line vote.

Beyoncé Knowles-Carter has shared a new video of the mobile Covid-19 testing sites she set up with her mother Tina Knowles-Lawson in their hometown of Houston, Texas.

The “Formation” singer ramped up her charitable efforts to fight the pandemic with the launch of the #IDIDMYPART campaign, which encourages black communities to prioritize health whilst giving them access to free Covid-19 testing.

Black and white footage posted on her Instagram page Wednesday night showed Houston residents flocking to two middle schools and waiting patiently in their cars to receive free coronavirus testing on May 8 and May 9.

“BEYGOOD MOBILE TESTING,” the caption of her video read.

The clip features an appearance from Houston rapper Paul Wall and Houston mayor Sylvester Turner and shows gift bags being handed out as medical staff wait to administer the tests.

Knowles-Lawson said the partnership with the 38-year-old star’s BeyGOOD initiative was a response to the disproportionate deaths in African-American communities.

“We have to look at what is happening in our Black and Brown communities and how they are being decimated by Covid-19,” Knowles-Lawson said in a statement. “It is critical that we stay vigilant with social distancing, wearing a mask, and most of all getting tested.”

President Donald Trump called on governors across the nation to work to reopen schools closed because of the coronavirus, pointedly taking issue with Dr. Anthony Fauci’s caution against moving too quickly in sending students back to class.

The president accused Fauci of wanting “to play all sides of the equation.”

Fauci had urged caution in testimony before a Senate committee Tuesday, although he made clear that he believes reopening decisions will likely differ from one region to the next.

“To me, it’s not an acceptable answer,” Trump said of Fauci, adding that the coronavirus has “had very little impact on young people.”

The Wisconsin Supreme Court has struck down Gov. Tony Evers’ stay-at-home restrictions. The high court ruled for Republicans in a challenge to an extension issued by the governor’s health secretary, arguing she exceeded her authority. The 4-3 ruling means the state is essentially reopened ahead of the May 26 expiration date of Evers’ order. It lifts caps on the size of gatherings, allowing people to travel as they please and allowing shuttered businesses to reopen, including bars and restaurants.

US immunologist warns of ‘darkest winter’ if virus rebounds

The U.S. immunologist who says he lost his government job because he warned the Trump administration to prepare for the coronavirus pandemic isn’t backing off his bleak forecast. Dr. Rick Bright is preparing to tell Congress that America faces the “darkest winter in modern history” unless its leaders act decisively to prevent a rebound of the coronavirus. Bright is set to appear Thursday before the the House Energy and Commerce Committee. In prepared testimony, Bright says failing to develop a national coordinated response, based in science, could mean the pandemic will get far worse and cause unprecedented illness and fatalities.

U.N. Secretary-General Antonio Guterres is urging governments, civil society and health authorities to urgently address mental health needs arising from the coronavirus pandemic. He warns that psychological suffering is increasing. Guterres points to “grief at the loss of loved ones, shock at the loss of jobs, isolation and restrictions on movement, difficult family dynamics, and uncertainty and fear for the future.” The U.N. chief said in a video message late Wednesday that “after decades of neglect and under-investment in mental health services, the COVID-19 pandemic is now hitting families and communities with additional mental stress.”

Airlines are under growing pressure to give cash refunds instead of travel vouchers to passengers who cancel flights because of the coronavirus. The airlines say they are complying with federal regulations by paying cash only if they cancel the flight.  Industry officials say airlines are bleeding cash because of a sharp downturn in air travel and forcing them to pay cash refunds instead of travel vouchers would push them closer to bankruptcy.

Senator Edward Markey, D-Mass says that “at a time when families are struggling to pay for food, for housing, for prescriptions, it’s absolutely unconscionable that the airlines won’t return this money to consumers.”

Markey and four other Senate Democrats proposed legislation on Wednesday that would require airlines to give full cash refunds to passengers during the pandemic, no matter whether the airline or the passenger cancels the flight. They say they will try to include the requirement in any further virus-relief measures.

NYC broadens guidelines for who should be tested for virus

New York City is broadening the guidelines for who should get tested for the coronavirus. The new guidelines include anyone with symptoms of COVID-19 and anyone who works at a nursing home or shelter. The new testing guidelines come as the city opens more testing sites with the goal of administering 20,000 tests a day by May 25.

All in Los Angeles must wear mask when outside home

Everyone in Los Angeles must wear a mask when outside their homes.

The new order is intended to slow the spread of the coronavirus as easing of other restrictions allows more people to return to work and recreation. Mayor Eric Garcetti announced the requirement Wednesday evening, saying “every reasonable precaution” must be taken as steps are slowly being taken to reopen the economy.

Easing of the “safer at home” orders issued by the city and Los Angeles County began last week with the reopening of some retail using curbside pickup, hiking trails and golf courses. Beaches reopened Wednesday, and there is now further opening of retail, manufacturing and logistics.

Atlanta’s zoo plans to reopen this weekend as more Georgia businesses attempt to get back to normal amid the coronavirus outbreak.

Outdoor areas of the zoo will reopen to the public on Saturday, with employees wearing masks and the number of visitors limited, zoo officials said.

“We are pleased to welcome our members and guests back to the outdoor experiences and connections to wildlife that can only be found at Zoo Atlanta,” Raymond King, the zoo’s president and CEO, said in a statement.

“As important as this is to us, it was essential that we not reopen the zoo until we could do so confidently, with the safety of our visitors, team members and the animals in our care as the number one priority,” he added. “Many weeks of planning have gone into our reopening, and everything we have done or will do is being done with this in mind.”

A court ruling tossing out Wisconsin’s stay-at-home order threw communities into chaos. Some bars opened immediately and were packed with customers, while other local leaders moved quickly to keep strict restrictions in place amid the coronavirus pandemic.

The conservative majority of the Wisconsin Supreme Court late Wednesday afternoon ruled that the “safer at home” order from Democratic Gov. Tony Evers was invalid. The move drew praise from President Donald Trump on Thursday. He tweeted, “The people want to get on with their lives. The place is bustling!” Evers was meeting Thursday with Republican leaders to discuss next steps.

Some US schools are pulling the plug on distance learning

Some school districts around the United States are calling an early end to the school year and pulling the plug on distance learning. Instruction is ending early for one of every 10 students in Georgia as well as other districts including Omaha, Nebraska, and Washington, D.C.

Officials say distance learning has been too stressful, the lack of devices and internet access has been too much to overcome, and what students get from it just hasn’t been worth the struggle. Experts who study how learning slows in summer say reduced instruction could make things worse.

Worries about having enough to eat are adding to the anxiety of millions of people across the United States. That’s according to a survey that finds 37% of unemployed Americans ran out of food in the past month. And 46% said they worried about running out.

Those findings come from the second wave of the COVID Impact Survey, conducted by NORC at the University of Chicago for the Data Foundation. The survey also found that 2 in 10 working adults said that in the past 30 days, they ran out of food before they could earn enough money to buy more.

A survey of small businesses released Thursday by the U.S. Census Bureau shows oil extraction and mining businesses had the best success in getting loans from the Paycheck Protection Program.

Utilities fared the worst with less than a quarter of small businesses getting loans.

The Miami Marlins will temporarily furlough 90 to 100 baseball operations employees beginning June 1 because of the coronavirus pandemic, a person familiar with the decision said Wednesday.

The person confirmed the furloughs to The Associated Press on condition of anonymity because the Marlins didn’t comment publicly.

About 40 percent of the baseball operations staff will be affected, with the status of those furloughed to be evaluated monthly, the person said. Their health benefits will continue through the end of October.

Last month Marlins CEO Derek Jeter told team employees he was forgoing his salary during the pandemic, and other members of the executive team agreed to take pay cuts.

Orlando became the latest NBA team to reopen its practice facility since the coronavirus shutdown, with Nikola Vucevic among the first Magic players to arrive back for voluntary workouts Thursday.

The Magic released video of Vucevic working with assistant coach Lionel Chalmers, who was in a mask and gloves for the session. The NBA requires anyone who is present for the workouts, except for the player while he is working out, to be wearing personal protective equipment.

“It felt good to be back here and get some work in,” Vucevic said afterward in a message distributed by the team. “But I still want you guys to stay safe, be smart, listen to the experts. It’s still a dangerous time for everybody. But be safe, listen to the experts and I’ll see you soon.”

Vucevic was averaging 19.5 points and 11 rebounds per game for the Magic when the NBA season was suspended March 11.