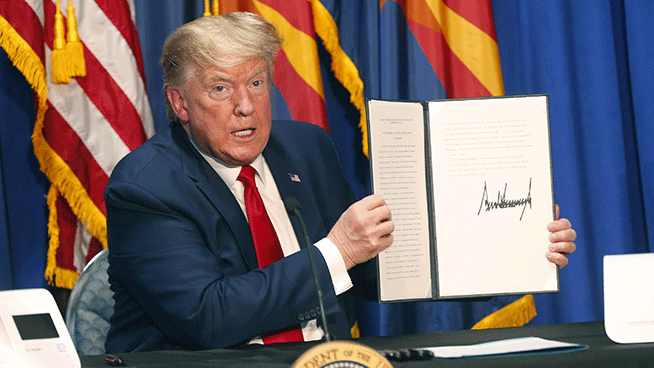 President Donald Trump said Friday that he’s hopeful to have a coronavirus vaccine on the market by the end of the year or shortly thereafter.

Moncef Slaoui, a former pharmaceutical executive who Trump has tapped to serve as the administration’s virus czar, said that early trial data suggests that “a few hundred million doses of vaccine” will be delivered by late 2020.

Trump, speaking at a Rose Garden event, reiterated that he wants to see states move forward with reopening their economies.

“We are back, vaccine or no vaccine,” Trump said.

Health and Human Services Secretary Alex Azar says the White House still has confidence in a rapid COVID-19 test it has been using despite new data suggesting the test may return false negatives.

The head of the Food and Drug Administration says his agency has provided new guidance to the White House after data suggested that the Abbott test used by President Donald Trump and others at the White House every day may provide inaccuracies and false negatives.

The measure cleared an early procedural hurdle 207-199 on Friday with 14 Democrats voting in opposition, an unusually high number of “no” votes but small enough to suggest that leadership had things under control.  House Speaker Nancy Pelosi has already said the 1,815 measure is Democrats’ opening offer in what is expected to lead to bipartisan negotiations. It’s expected to pass later Friday.

New York City will spend $55 million to provide 74,000 free air conditioners to low-income older adults who may be cooped up inside their apartments all summer because of the coronavirus pandemic, Mayor Bill de Blasio said Friday.

“Knowing that low-income seniors are the most vulnerable, we’re going to start an initiative right away to get them air conditioners,” de Blasio said.

Other measures aimed at helping New Yorkers survive summer in the era of social distancing will include setting up air-conditioned cooling centers in facilities such as gyms and libraries and opening fire hydrants safely.

“This is all about protecting New Yorkers and helping them through the summer,” de Blasio said.

Parts of Pennsylvania ease some restrictions

Another 2.6 million people across western Pennsylvania began to emerge from pandemic restrictions as Gov. Tom Wolf prepared to announce that 12 more counties soon would join them in a partial easing.

Wolf planned to announce that Adams, Beaver, Carbon, Columbia, Cumberland, Juniata, Mifflin, Perry, Susquehanna, Wyoming, Wayne and York will be the next batch of counties moving to the “yellow” phase of his reopening plan, effective May 22, The Associated Press has learned. They are primarily in the south-central and northeast regions of the state.

Local leaders on the Texas border are asking Republican Gov. Greg Abbott to delay letting more businesses reopen next week. Health officials in El Paso say they’re worried about relaxing lockdown measures after COVID-19 cases in their community surged by 60% in the past two weeks.

Abbott on Monday is set to announce that patrons can return to gyms. Abbott has defended the pace by emphasizing that hospitalization and infection rates are steady as Texas tests more people. In Oklahoma, lawmakers who were irritated by local officials imposing stricter measures during this health crisis passed a House bill that would weaken cities’ power during the next one.

Michelle Obama is helping to give students a prom.

Obama’s nonpartisan organization, When We All Vote, and MTV will host a virtual prom event for the class of 2020.

The event, announced on Thursday, is meant to boost the spirits of the students whose proms and graduation ceremonies have been canceled due to Covid-19 as well as shine a light on registering and voting in the national election in November.

MTV’s Prom-athon is also being held in partnership with the 2020 Prom Challenge which Obama publicized in February by sharing her own prom photo.

The event is scheduled to kick off on May 22 with an all-day, on-air takeover on MTV featuring prom-themed throwback movies and short-form original content highlighting the winning schools and students.

At 9 p.m. EST a virtual prom party will live stream on MTV YouTube and include surprise celebrity guest appearances and live performances from major artists.

The event also serves to celebrate 20 winning high schools and students who organized the most creative nonpartisan voter registration efforts across the country.

We must announce that we will regretfully be rescheduling our upcoming 2020 tour. All dates currently scheduled between May 30th and September 17th, 2020 are being rescheduled for the summer of 2021. We are looking forward to having the opportunity to be back out on the road next year.

“We want everyone to take care of themselves this summer and we really look forward to being back out with all our fans healthy and happy next year.” – Adam

All tickets for the tour will remain valid and will be honored once new dates are rescheduled. Information on rescheduled dates will be announced soon.

After living through both the 1918 flu pandemic and current coronavirus pandemic, the label is fitting.

Goldsholl, who lives at a nursing home in Allendale, New Jersey, has fully recovered from coronavirus after being diagnosed with it last month, New Jersey Gov. Phil Murphy said at a press conference on Thursday.

That might make her the oldest person in the state to recover from the virus, according to CNN affiliate News 12 New Jersey.

“I survived everything because I was determined to survive,” she told News 12 New Jersey in an interview conducted over video chat last week.

Goldsholl originally lived in the Bronx before moving to New Jersey 20 years ago, according to News 12. She didn’t really want to talk about the virus, the News 12 reporter said — but she did reminisce about her family.

“The oldest of four children and I was the smartest one from the bunch,” she said, while sporting a pink boa around her neck. “I am a survivor. I’ve got to come out on the top of every list.”

The staff at Allendale Community for Senior Living shared her story on Facebook. They described her as the “model of positive perseverance.”

A 113-year-old Spanish woman born in the United States says she is in good health after having overcome a coronavirus infection. Maria Branyas said that she “feels good” after having avoided developing any serious symptoms of COVID-19.

Her daughter told Spanish news agency EFE that she tested positive for the virus in April. Branyas’ latest test came back negative. Branyas was born in San Francisco in 1907 after her family emigrated to Mexico and then the U.S. Branyas said that the pandemic claimed over 27,000 lives in Spain was “a tragedy.”

U.S. retail sales tumbled by a record 16.4% from March to April as business shutdowns caused by the coronavirus kept shoppers away, threatened stores across the country and weighed down a sinking economy.

The Commerce Department’s report on retail purchases showed a sector that has collapsed so quickly that sales over the past 12 months are down a crippling 21.6%.

The sharpest drops from March to April were at clothiers, electronics stores, furniture stores and restaurants. A long-standing migration of consumers toward online purchases is accelerating, with that segment posting a 8.4% monthly gain. Measured year over year, online sales surged 21.6%.

If the NBA resumes its 2019-2020 season without spectators in attendance, TV viewers could be in for a very different kind of experience and broadcasters might have their work cut out monitoring players’ trash-talking.

“It would be raw,” the three-time champion said. “This would take it to a whole another level to just pure insanity of what we say on the court, what, you know, that trash talk that happens, even myself taking part in it.

“But I think everybody, from whether you’re on the court, on the bench, all the nonsense, like that might be something that’s really appealing from a fan perspective to get up close and personal with what we do on the court.”