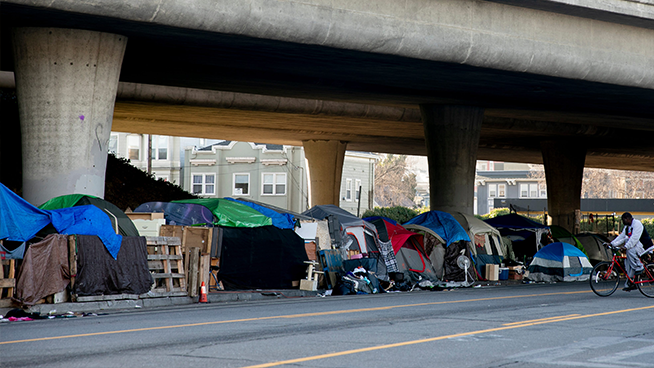 San Francisco and Oakland have both committed a lot of recourses so far to helping their homeless populations but SF District Supervisor Matt Haney says that it’s mostly talk.

Haney, who is the Tenderloin’s District Supervisor, tweeted out that encampments in the neighborhood have risen from 145 to 432 just since March 5th. That is triple it’s amount from two months ago.

There were 145 tents on March 5th in the TL, now there are 432. In the middle of a pandemic, more and more people are living on the streets in the TL, unprotected, which also puts residents who are housed at much greater risk. We need serious, coordinated, dedicated support.

Currently the city has committed thousands of hotel rooms, fleets of mobile homes, and many “safe camping areas” to help the homeless population. However, even those recourses, Haney says, are not enough, or at least the wheels of bureaucracy are moving far too slowly. He has called on his city to help create “actual change” through working groups, contact tracing efforts, mobile testing, and public outreach. Though most importantly the supervisor demanded clear goals and timelines, something that he lamented the city is lacking so far.

“The TL is still gravely at risk, not much has changed since the announcement of the ‘Tenderloin plan.’ Unfortunately it’s not actually a plan, more of an assessment, without a timeline, point person, process, clear goals, or much input at all from residents,” said Haney

Despite this Haney has continued to write legislation, letters, op-eds and held press conferences to enact that “actual change.” The supervisor even raised over $120,000 himself to house his constituents and personally handed out PPE while the city dragged it’s feet on accomplishing the same goals.

We are out here at 4th and Howard for the next 45 min in SOMA/Yerba Buena.

Come get a mask and a goodie bag courtesy of @YBCBD and @creativitykids and my office.

Though Haney pleads for more tangible action from San Francisco the city has announced Friday that a second safe camping area will open in the Pan Handle with 70 openings and Oakland announced it has launched Operation HomeBase with a 130 person capacity.

Today we launched Operation HomeBase, a new trailer facility to immediately house 130 unsheltered residents. We built the site to address the COVID-19 crisis of right now, but also as a safe + compassionate space for the future. pic.twitter.com/mrAxMQxlFx

Haney, Breed, and Schaaf all seem to be frustrated with the situation and left wanting to do more, but the pandemic creates new and challenging situations for everyone. San Francisco mayor London Breed says that every problem has been exacerbated by the pandemic including the city’s homelessness issue. She also seems to think that transitional solutions like couch suffering and government programs like Homeward Bound have caused those in unstable living situations to take to the streets. Furthermore, many San Franciscans are continuing to loose work and financial security. Governor Newsom last week projected California to be at nearly 22% unemployment in the wake of COVID-19 impacting the US.