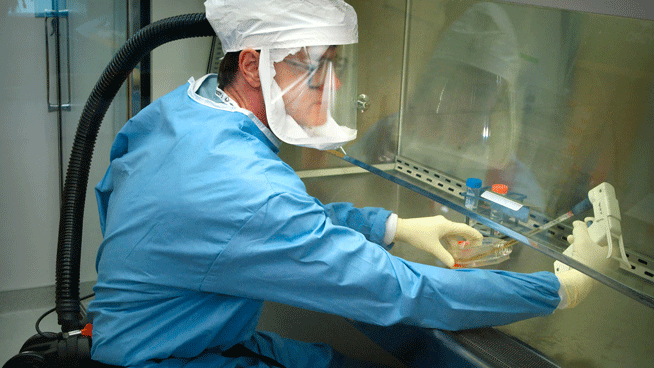 Study volunteers given either a low or medium dose of the vaccine by Cambridge, Massachusetts-based Moderna Inc. had antibodies similar to those seen in people who have recovered from COVID-19.

In the next phase of the study, led by the U.S. National Institutes of Health, researchers will try to determine which dose is best for a definitive experiment that they aim to start in July.

In all, 45 people have received one or two shots of the vaccine, which was being tested at three different doses. The kind of detailed antibody results needed to assess responses are only available on eight volunteers so far.

The results have not been published and are only from the first of three stages of testing that vaccines and drugs normally undergo. U.S. government officials have launched a project called “Operation Warp Speed” to develop a vaccine and hopefully have 300 million doses by January.

Powell: Recovery may begin by summer, will likely be slow

Federal Reserve Chair Jerome Powell is expressing optimism that the U.S. economy can begin to recover from a devastating recession in the second half of the year, assuming the coronavirus doesn’t erupt in a second wave.

But he suggested in an interview with CBS’s “60 Minutes” that a full recovery won’t likely be possible before the arrival of a vaccine.

Powell says the economy was fundamentally healthy before the virus struck suddenly and forced widespread business shutdowns and tens of millions of layoffs. He says once the outbreak has been contained, the economy should be able to rebound “substantially.”

In the interview with CBS, Powell played down comparisons to the Depression. While acknowledging that unemployment could peak near the Depression high of 25%, he said U.S. banks are far healthier now and that the Fed and other central banks are much more able and willing to intervene to bolster economies than they were in the 1930s.

One of President Donald Trump’s top economic advisers is criticizing the Centers for Disease Control and Prevention’s early response to the coronavirus outbreak, saying it “let the country down” after initial delays with testing.

White House trade adviser Peter Navarro declined to say when asked Sunday on NBC’s “Meet the Press” whether Trump had confidence in the CDC to lead the U.S. pandemic response, saying that was a question for the president.

But Navarro says the CDC “set us back” in the early weeks of the outbreak, struggling to develop its own test kit for coronavirus. .

Health and Human Services Secretary Alex Azar on Sunday said he disagreed the CDC had let the nation down. He told CBS’ “Face the Nation”: “I believe the CDC serves an important public health role.”

New York Gov. Andrew Cuomo got tested for coronavirus on live TV Sunday as he announced all people in the state experiencing flu-like symptoms are now eligible for tests.

Any New Yorkers experiencing flu-like symptoms or those who will be returning to work as part of phased reopenings across the state can now get tested, Cuomo said.

An agreement with CVS will allow samples to be collected at more than 60 pharmacies across the state, Cuomo said. Testing in New York City is being expanded to 123 CityMD walk-in clinics.

The average U.S. price of regular-grade gasoline rose a nickel over the past three weeks, to $1.97 per gallon. Industry analyst Trilby Lundberg says the slight jump comes after prices at the pump crashed for nine weeks straight during the coronavirus pandemic. She says gas prices are likely to continue to rise amid increased demand as widespread stay-at-home orders are eased. The highest average price in the nation for regular-grade gas is $3.10 per gallon in Honolulu. The lowest average is $1.40 in Tulsa, Oklahoma.

A homebound Penn & Teller make magic for us during lockdown

The magicians Penn & Teller hope to pull off a heck of a trick on Monday by making fears of the coronavirus disappear, at least for an hour. The duo star in the CW’s new “Penn & Teller: Try This at Home,” created and filmed entirely by the homebound magicians and their friends.

The special’s name is a riff off the title of a TV special they did years ago,  “Don’t Try This at Home.” This time they want the audience to try the tricks on their families and maybe amuse delivery people.

A gym in New Jersey reopened for business early Monday, defying a state order that shut down nonessential businesses to help stem the spread of the coronavirus.

People began gathering outside the Atilis Gym in Bellmawr several hours before it reopened at 8 a.m. The owners have said the decision to resume operations at the members-only facility was not about financial gain, but rather a question of Constitutional rights.

“We truly believe that if we don’t do this, in the end, we will have zero rights and no say in what happens,” co-owner Frank Trumbetti said in a video posted on the gym’s Facebook page. Trumbetti has said he recently lost a loved one to the coronavirus.

Dozens of people came out to show their support for the gym, with many holding signs critical of Democratic Gov. Phil Murphy and others waving American flags. Only some were wearing face coverings and most people tightly clustered together on the sidewalk and parking area in front of the gym.

“If they shut us down today, we’ll reopen tomorrow,” co-owner Ian Smith told the cheering crowd. The gym then saw a steady stream of customers as the morning progressed.

More than 130,000 autoworkers returned to factories across the U.S. in one of the biggest steps yet to restart American industry, while an experimental vaccine against the coronavirus showed encouraging results in an extremely small and preliminary study.

Western NY including Buffalo to start 1st phase of reopening

Gov. Andrew Cuomo says western New York, including the city of Buffalo, has met coronavirus containment goals and can begin to reopen its economy. Hospitals will be able to schedule elective surgeries as the region enters the first phase of reopening on Tuesday.

But gatherings such as church services and sports events will still be banned. New York City Mayor Bill de Blasio says the city is ramping up its ability to test for the coronavirus, with testing available at more than 150 sites citywide and test kits made in the city now in use.

One of South Carolina’s major universities is canceling fall break next semester and ending in-person classes before Thanksgiving because of the coronavirus.

The University of South Carolina said it is ending in-person classes a few weeks early because it anticipates a second wave of COVID-19 cases along with the regular flu season.

The university says it is not including the typical four-day break in October so students and professors won’t be as likely to travel throughout the country and possibly return with COVID-19 or other viruses from faraway places.

Advocates for people with disabilities and minority voters in Wisconsin have filed a sweeping federal lawsuit seeking changes to ensure the August primary and November presidential election can be held safely amid the coronavirus pandemic.

They’re asking a judge to order that more poll workers be hired and every voter in the state receive an absentee ballot application, among other changes. Wisconsin has been at the center of the fight over elections after it proceeded with the April 7 presidential primary even as other states delayed voting.

The lawsuit argues that not enough has been done since then to ensure that the upcoming elections can be conducted safely and fairly. A Wisconsin Elections Commission spokesman declined to

J.C. Penney will close almost 30% of its 846 stores as part of a restructuring under bankruptcy protection. The ailing department store said Monday that it plans to close about 192 stores by February 2021, and then 50 additional stores in the year after that. That would leave the company with just over 600 locations.

J.C. Penney filed for bankruptcy reorganization on Friday, making it the biggest retailer to do since the coronavirus pandemic forced them to shut down all stores.

Uber has cut 3,000 jobs from its workforce, its second major wave of layoffs in two weeks as the coronavirus slashed demand for rides. The San Francisco company has cut a quarter of its workforce since the year began, eliminating 3,700 people from the payroll earlier this month. CEO Dara Khosrowshahi says Uber will re-focus on its core business, including moving people and delivering food and groceries. Almost all departments will be affected by layoffs. Uber will be closing or consolidating 45 offices globally.

The coronavirus pandemic has been the most financially disastrous force in the century-old history of commercial air travel.

With most of the world’s planes grounded, the airline industry is looking at a potential $314 billion drop in revenue this year.

The crisis has also thrown up some unusual aviation landmarks, as airlines employ unprecedented measures for unprecedented times.

And now, in the US, a requirement to keep essential air connections intact in order to qualify for government bailout money means that airlines are introducing temporary short-hop routes. So, for a short time only, North America’s newest shortest domestic flight has entered service.

Want to fly across Colorado today on the 29-mile route between the mountain communities of Eagle-Vail and Aspen? A one-way trip will costs you $251 on American Airlines, but we’d hope you’d have a very good reason for booking.

Aviation blog A View from the Wing reports that airlines are introducing multi-hop “tag flights” to meet their service obligations as efficiently as possible at a time when demand for air travel has dropped by 96%.

Some groups in the U.S. are making regular phone calls to older adults to help ease loneliness during the pandemic. For 81-year-old Dell Kaplan, the offer to get calls from a stranger just to chat was immediately appealing.

The suburban Dallas resident is missing meals with friends, family get-togethers and going to adult learning classes. As part of a program being offered by the city of Plano, someone is calling her every other week.

She and volunteer Holly Ryckman have found common ground in talking about their city and isolating at home. Ryckman said the calls have been “a gift” for her.