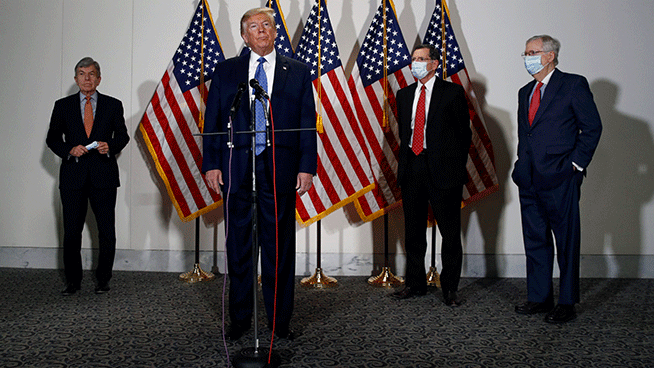 The coronavirus has sparked concerns about how private medical information is being used. An Associated Press review shows that health officials in at least 35 U.S. states are sharing the addresses of those who test positive for coronavirus to first responders who request it.

Ten of those states also share names. Law enforcement officials say first responders use the information to take extra precautions that help them avoid contracting and spreading the disease. But civil liberty and community activists have expressed concerns of potential profiling in African American and Hispanic communities that already have an uneasy relationship with law enforcement.

President Donald Trump said Monday he is taking a malaria drug to lessen symptoms should he get the new coronavirus, even though the drug is unproven for fighting COVID-19.

Trump told reporters he has been taking the drug, hydroxychloroquine, and a zinc supplement daily “for about a week and a half now.” Trump spent weeks pushing the drug as a potential cure for COVID-19 against the cautionary advice of many of his administration’s top medical professionals.

Trump said his doctor did not recommend the drug to him, but he requested it from the White House physician.

The Food and Drug Administration has warned against the drug combo and said hydroxychloroquine should only be used for coronavirus in formal studies. It can cause heart rhythm problems and other side effects.  Two large observational studies, each involving around 1,400 patients in New York, recently found no benefit from hydroxychloroquine. Two new ones published Thursday in the medical journal BMJ reached the same conclusion.

Fox’s Cavuto urges viewers not to take drug like Trump

Fox News Channel’s Neil Cavuto urged the network’s viewers not to follow President Donald Trump’s example and take an anti-malaria drug as a protection against the coronavirus. Trump had revealed at a news conference that he had been taking the drug hydroxychloroquine to ward off the virus, despite the warnings of medical researchers that it has potentially fatal side effects. Cavuto, who has multiple sclerosis and other health issues, says people in vulnerable health should not follow the president’s example. Trump complained on Twitter Monday night that Fox News “is no longer the same.”

Restaurant owners have given President Donald Trump a dire accounting of the widespread damage the coronavirus pandemic has dealt their industry and have asked him to tweak a loan program for small businesses to address their concerns. The president put a hopeful spin on their situation, saying encouraging news on vaccines and treatment efforts could “negate” the bad news. The president was in good spirits Monday, noting that financial markets were up as states continue to loosen economic restrictions on businesses and following Moderna Inc.’s announcement of encouraging news in early work on vaccine development.

A Kansas congressman who is also a doctor says he is taking the malaria drug that President Donald Trump has touted as a treatment for the coronavirus. Republican Rep. Roger Marshall says he doesn’t COVID-19 but he’s been taking hydroxychloroquine to hold off the virus.

A spokesman for Marshall, who is running for  Senate, told The Kansas City Star on Tuesday that Marshall’s parents, siblings and wife also are taking the drug. Trump said Monday that he’s taking the drug to protect himself from the coronavirus. Health officials have questioned the drug’s usefulness against COVID-19 and warned that it could cause significant side effects, including irregular heart rhythms and death.

Six drugmakers that manufacture generic hydroxychloroquine report the drug is in short supply, while three others reported in the last week that their product is available

That’s according to the Food and Drug Administration’s drug shortages website. The companies cite increased demand as the cause, with some stating they expect to next ship the drug at the end of May.

President Donald Trump said Monday he has been taking hydroxychloroquine and a zinc supplement daily “for about a week and a half now,” after two White House staffers tested positive for the coronavirus.

The retailer said Tuesday that sales at stores open for at least a year soared 10% in the three months ending on April 30, compared with the year prior. Online sales spiked 74%.

Walmart is this country’s largest retailer and has benefited from shifting shopping patterns during the crisis. Consumers cut back on some discretionary spending but continued to buy food and household goods as they sheltered at home. Walmart said it got a boost in April from shoppers using their government stimulus payments.

The company’s investments in ecommerce also paid off in the quarter. To fight Amazon (AMZN), Walmart had built out its curbside pickup and home delivery network for groceries in recent years. Walmart has nearly 3,300 store pickup locations, and more than 1,850 stores offered same-day grocery delivery.

Prime Minister Justin Trudeau says the border is a source of vulnerability so the agreement will be extended by another 30 days. The restrictions were announced on March 18 and were extended in April.

Trudeau says Canada’s provincial leaders clearly wanted to continue the measures. Many Canadians fear a reopening. The U.S. has more confirmed cases and deaths from COVID-19 than any country in the world, though its per-capita numbers are well below many other nations.

Public health officials in at least two-thirds of U.S. states are sharing the addresses of people who have the coronavirus with first responders.

Supporters say the measure is designed to protect those on the front line, but it’s sparked concerns of profiling in minority communities already mistrustful of law enforcement.

The AP review shows public health officials in at least 35 states share the addresses of those who have tested positive for the coronavirus — provided by the state or local health departments to emergency dispatch centers that request it. In at least 10 of those states, health agencies also share their names: Colorado, Iowa, Louisiana, Nevada, New Hampshire, New Jersey, North Dakota, Ohio, South Dakota and Tennessee. Wisconsin did so briefly but stopped earlier this month.

In Tennessee, the issue has sparked criticism from Republican and Democratic lawmakers who recently became aware of the data sharing. Some critics wonder why first responders don’t take precautions with everyone, given so many people with the virus are asymptomatic or present mild symptoms.

Donation brings a bit of Mardi Gras to hospital workers

A New York woman has collaborated with the New Orleans Jazz Orchestra to put on what she calls a stimulus serenade to give moral support to front-line hospital workers and COVID-19 patients in New Orleans. The jazz music fan dreamed up the idea when she got her stimulus check; she donated her check and a friend did, as well.

The idea was to serve two causes: support hospital workers and staffers and provide a paying “gig” for out-of-work musicians. She says music “is really important as a way for us to communicate with each other in these isolating times.”

Museums are hesitantly starting to reopen as the coronavirus lockdown is relaxed in many nations across the world. Yet experts say that one in eight could face permanent closure because of the pandemic.

Studies by UNESCO and the International Council of Museums show 90% of museums have had to close their doors for at least part of the time affecting some 85,000 institutions.  The crisis cuts across the board, affecting museums big and small, new and established, dedicated to art or science.

Shakespeare’s Globe theater, one of London’s major tourist attractions, says it could be forced to close because of the coronavirus pandemic.

All of Britain’s theaters have been shut since March, when the government imposed a nationwide lockdown to slow the spread of the virus.

While some venues receive government subsidy, the Globe gets 95% of its revenue from ticket sales. The theater says the blow from the pandemic “has been financially devastating and could even be terminal.”

Parliament’s culture committee told the government that the Globe was “part of our national identity.” It says, “for this national treasure to succumb to COVID-19 would be a tragedy.”

The Globe is a reconstructed Elizabethan playhouse beside the River Thames modeled on the theater where many of Shakespeare’s plays were first performed. It opened in 1997 and draws hundreds of thousands of people a year to its open-air productions.

NASCAR’s comeback from the coronavirus continues with its first Wednesday race in 36 years. In that last race, Richard Petty won his 200th Cup Series race at Daytona on July 4, 1984.

This time, NASCAR will be back at Darlington three days after resuming its season.  Joey Logano likes that he has a chance to improve his 18th-place finish at Darlington on Sunday. Former racer Donnie Allison said drivers will have to stay mentally engaged to excel.

The NFL is testing new face masks with surgical or N95 material, an official said yesterday on the Adam Schefter Podcast.

Thom Mayer, the NFL Players Association’s medical director, said that when the league returns to play, “there will probably be a recommendation” that the NFL use the masks.

According to Mayer, the NFL and sports equipment maker Oakley are teaming up to work on these masks.

The Belmont Stakes, one of horse-racing’s biggest events, will take place without spectators in attendance on June 20 amid the coronavirus pandemic, the New York Racing Association (NYRA) said in a statement on Tuesday.

The Belmont Stakes will take place on Saturday, June 20, at Belmont Park in Elmont, and it will be run at a mile and an eighth instead of the usual mile and a half length. The race will take place two weeks later than originally scheduled.

It’ll now be the first jewel of the Triple Crown for this year. The Kentucky Derby will be run September 5th and the Preakness Stakes on October 3rd.

·       Cover your cough or sneeze with a tissue, then throw the tissue in the trash.