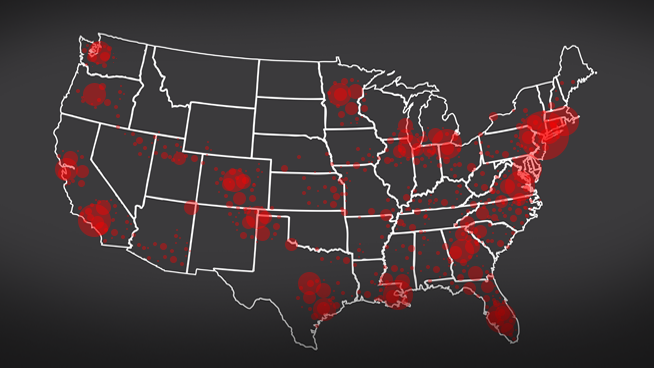 A new study done by Colombia University reveals an unsettling truth about the United States’ response to the COVID-19 pandemic, the truth that we acted too slowly.

Worldwide the SARS-CoV-2 pandemic has infected millions and killed hundreds of thousands. The United states is the hardest hit country by virus thus far with 1,576,542 confirmed cases and 94,591 deaths according to the Johns Hopkins University.

Colombia University published a paper this week that tested the disease transmission rates and rebound rates of COVID-19 via a computer model. They ran simulations based on human mobility data and COIVD deaths and infections to understand how the virus spreads. Their main finding: social distancing works.

The test showed that non-pharmaceutical interventions (NPI), such as social distancing, PPE, and other sanitization measures, had incredible effectiveness in metropolitan areas. The models simulated what would have happened in 6 major areas, New York, New Orleans, Los Angeles, Chicago, Boston and Miami, on five different dates.

The model first tested it’s algorithm against real world numbers and yielded data that closely resembled the numbers we see today. Soon it had it’s clock turned back, where it measured scenarios where the U.S. shifted the implementations of NPIs from mid-March to March 8th and March 1st. The study claims that if the United States had started it’s efforts even a week earlier it would have avoided 703,975 confirmed cases and 35,927 deaths nationwide as of May 3, 2020.

“These findings highlight the dramatic effect that early, coordinated interventions have on the COVID-19 pandemic,” the article stated. “Efforts to further raise public awareness of the ongoing high transmissibility and explosive growth potential of COVID-19 are still needed at this critical time. Our results also indicate that without sufficient broader testing and contact tracing capacity, the long lag between infection acquisition and case confirmation masks the rebound and exponential growth of COVID-19 until it is well underway.”

In short, the country needs expanded testing and contact tracing otherwise easing public health orders is a shot in the dark.

According to the model the New York metropolitan area, the epicenter of the COVID-19 outbreak in the US, could have itself avoided 209,987 cases and 17,514 deaths if the state’s interventions had gone into effect just one week earlier. The model shows that this effect, a reduction in infections and deaths by 80%, could have been even more pronounced had the state acted two weeks earlier, seeing an 84% reduction in infections and a 93% reduction in deaths. New York Governor Andrew Cuomo first implemented the state’s stay at home oder on March 22nd.

The Bay Area, which has a population of around 7 million, has so far been widely unaffected by the pandemic. However, it was also the first region in the country to implement a public health order to shelter in place, creating orders for six of it’s nine counties on March 17th. This is only 5 days before the state of New York, but Colombia University’s data shows that every day counted in the early onset of the pandemic. To date the Bay Area region has only seen 11,426 cases and 410 deaths.

The study went a step further and implemented these formulas to a scenario where the U.S. eased restrictions in early May and saw something disturbing on the horizon, a second wave in June.

“[In the scenario] a decline of daily confirmed cases continues for almost two weeks after easing of control measures. This decreasing trend, caused by the interventions in place prior to early May, coupled with the lag between infection acquisition and case confirmation, conveys a false signal that the pandemic is well under control,” the article stated.

“Unfortunately, due to high remaining population susceptibility, a large resurgence of both cases and deaths follows, peaking in early- and mid-June, despite the resumption of NPI measures 2 or 3 weeks following control relaxation. A one-week further delay to the resumption of control measures results in an average of 214,545 additional confirmed cases and 23,110 deaths nationally by July 1, 2020.”

The test also predicted that with a two week delay our highest daily numbers could spike to 35,288 infections and 3,392 deaths and if we waited three weeks to respond would cause 42,560 infections and 4,166 deaths.

These numbers are just projections but they visualize potential parallels as California and the Federal Government look to ease stay-at-home orders. The Governor California, Gavin Newsom, has begun phasing in limited commercial retail with proper interventions but also hinted at further easing of restrictions for the state over the coming weeks. One of the state’s main checks to changes it’s public health order is based around the ability to quickly reimplement interventions. However, these decisions have been based on decreased infection and mortality rates which the study says could be lagging and is no where near comprehensive. Monday Newsom boasted an impressive 1.3 million completed tests in California with 50,000 new tests done each day. Though this is a great start it is barley 3% of the population of the state. Like in the study, declining numbers could be from earlier successes and could potentially not reflect the current infection rate of the virus. Even with a quick response the state could be acting on data weeks old and be far too late.

The models run by the university suggested that reopening the country will have to be a slow and steady process. A process that can only be accomplished safely if we have the tools in place to increase testing and implement interventions where cases flair up. These abilities will be integral to monitoring new outbreaks until a vaccine can be achieved.