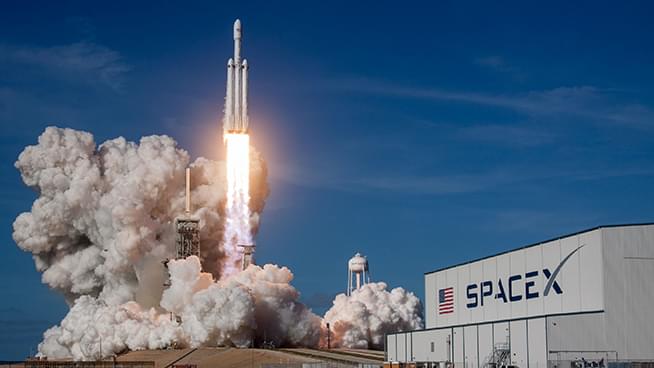 SpaceX is set to make history today, May 27th. Along with NASA astronauts, the company’s first-ever crewed mission is scheduled to launch at 4:33 p.m. EDT from NASA’s Kennedy Space Center in Florida.

The mission, called Demo-2, will carry astronauts, Doug Hurley a retired Marine, and Bob Behnken, an Air Force colonel to the International Space Station on a Falcon 9 rocket from Launch Complex 39A.

“We are once again launching American astronauts on American rockets from American soil…This is a big moment in time. It’s been nine years since we’ve had this opportunity.” NASA Administrator Jim Bridenstine said yesterday during a news conference.

According to ABC7, during the first launch from a private company the two astronauts, “Will spend one to four months aboard the orbiting lab, currently down to a three-man, half-size crew. They’ll lend a hand with experiments and possibly spacewalks, before ending their mission with an Atlantic splashdown, a scene not seen for a half-century.”

There is a 60% chance that weather conditions will allow for a launch this afternoon, however if it is too cloudy the next attempt to launch will be Saturday, May 30th.

“NASA is urging spectators to stay away because of the pandemic. But beaches near Kennedy are now open, and the local sheriff is welcoming visitors even though inside the space center, the number of guests will be severely limited. Among the exceptions: both astronaut wives – who have flown in space themselves – and their young sons,” reported ABC7. However, everyone can watch the launch live here.

SpaceX tweeted saying, “Dragon has undergone thousands of hours of testing to make it one of the safest human spaceflight vehicles ever flown. In 2015, Dragon completed a pad abort test, which verified the spacecraft’s ability to safely land astronauts in the unlikely event of an emergency on the pad”.

In January 2020, Crew Dragon and Falcon 9 completed a demonstration of the system’s launch escape capabilities, verifying its ability to carry astronauts to safety if there’s an emergency in-flight pic.twitter.com/IZRyRmB400

This mission is designed to validate SpaceX’s Crew Dragon capsule and Falcon 9 rocket for human spaceflight, so the company can fly operational crew missions for NASA.

SpaceX signed a $2.6 billion contract with NASA in 2014 to complete six missions. If all goes well during this flight, the first mission will take off shortly after Demo-2 lands. NASA did a similar deal with Boeing at the same time for $4.2 billion.