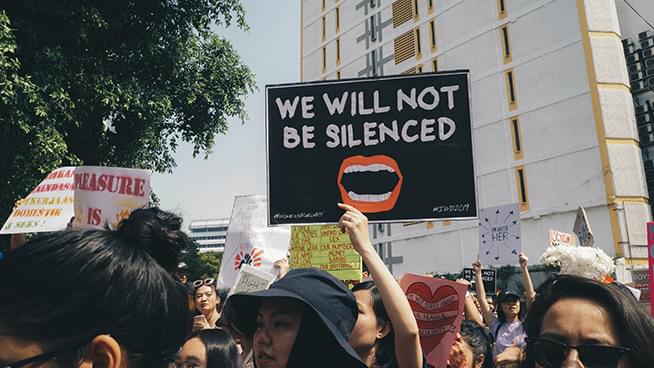 Newsom started his briefing saying, “Program passing is not problem-solving. You gotta change hearts, minds, you gotta change culture, not just laws.” He continued, “The black community is not responsible for what’s happening in this country right now, we are…our institutions are.”

He explained that, “We have a unique responsibility to the black community in this country” and our country has not given them the respect they deserve therefore, “People have lost patience for a reason”.

Newsom then expressed that influence can happen on any level. He encouraged everyone to speak up saying, “You don’t have to be something to do something.”

Although Newsom said he supports the protests he emphasized, “You are right to feel wronged, you are right to feel the way you are feeling” however, “The answer to violence is not more violence” and that he will not have “the same sensitivities” toward people being violent.

During the question and answer portion of the briefing, Newsom was asked his opinion on President Trump’s leadership or lack thereof. To which he responded, “Leadership can be found anywhere, in the absence of leaders people in positions of formal authority we have people that exercise their moral authority each and every day: church leaders, community leaders, faith-based leaders, of all stripes, teachers, parents, caregivers, people, strangers walking the street…leaders in law enforcement that meet this moment that recognize the empathy that’s called for as well. That kind of leadership is desperately needed in this nation…find those leaders to call for more of that kind of leadership in this country.”

When asked about making a statewide curfew, Newsom said, “We believe the conditions are very different” in each community and he will leave it up the individual counties to decide if they want to implement a curfew. Newsom said they are working with mayors, California Highway Patrol, and the National Guard to protect everyone in the state.

Discussing the violence that broke out during rallies Newsom said, “Nothing breaks my heart than see anyone get hurt…in some instances…that kind of violence was unnecessary to keep the peace.”

“When there are inappropriate acts done people need to be accountable” Newsom continued, “We will appropriately investigate…any acts of violence against others. Whether those acts be perpetuated by people of power and influence with badges on or uniforms or members of the community that are attacking and assaulting in a violent manner innocent peopled businesses”

The governor said there is plenty of work that we as a country have to do together over the next hours, days, months years and years ahead, including the need to “Address the foundational issues that end to the violence in the first place”

Newsom ended but saying, “Just like COVID-19, when it comes to fighting racism we are all in this together.”

Watch the full press briefing below.

The Black community is not responsible for what’s happening in this country right now — we are. Our institutions are.