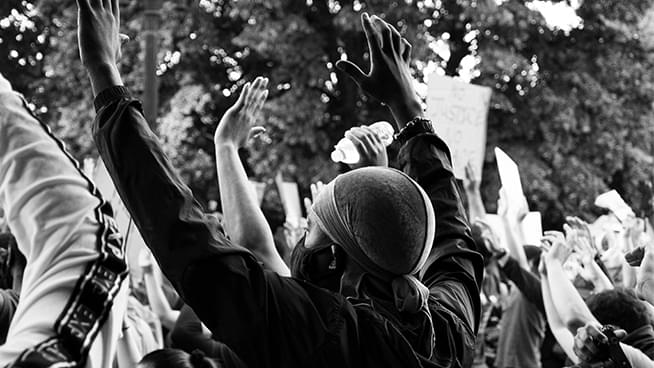 During the conference, he announced his instruction for California police officers to end carotid hold training, also known as strangleholds, in detaining suspects. The carotid hold is a form of chokehold that cuts off blood flow through the carotid arteries to the brain.

Newsom said, “At the end of the day, the carotid hold that literally is designed to stop people’s blood from flowing into their brain, that has no place any longer in 21st-century practices.”

He explained that California is in the process of banning carotid holds and he will sign the law once it arrives on his desk. California has already banned chokehold restraints, which cut off airflow through the windpipe. Newsom hinted that this is the first of many reforms to come.

After an extraordinary week in our nation’s history, Newsom said he met with many youth leaders who rightfully “demand progress” and remind people in power to lead with civility. Although he supports protests, he made it clear he does not support violence by saying there is, “Nothing courageous about violent acts” and, “No wrong has ever been righted by violent acts”.

“Criminal justice, I don’t think this, I know this, as governor I live this every day, a criminal system that treats people that are rich and guilty a hell of a lot better than people who are poor and innocent. You know that and I know that so why aren’t we doing something about it. We’re trying our best here in the state but we have to do more,” said Newsom.

He believes we need to start by helping earlier in life. Newsom recommended better prenatal care and preschool stating, “People aren’t left behind in society, they start behind in society” and the state is getting serious about addressing these disparities.

Last year, only 10% of black students met math state benchmarks by 8th grade. Due to COVID-19, the average learning loss is 7 months. However, in black communities, it is 10.3 months and in low-income communities, it is over 1 year. He said he is committed to the cause of equity and he, “Won’t budge on that [$4.3 million] budget proposal” for education.

Newsom said we must double down and, “Recognize those gaps that continue to persist in the state and the nation,” because, “We are not seeing people treated equally all across the state of California”.

He continued, “We have a hierarchy of values in this country that diminishes certain people based on the color of their skin and we have perpetuated that hierarchy for centuries in this state, and we need to own up to it and we need to foundationally rip that out of its root.”

Together as a state,“We will lead and we will listen and we will begin to reconcile, but with resolve and a commitment in a persistence, not patience that is demanding of this moment,” said Newsom.