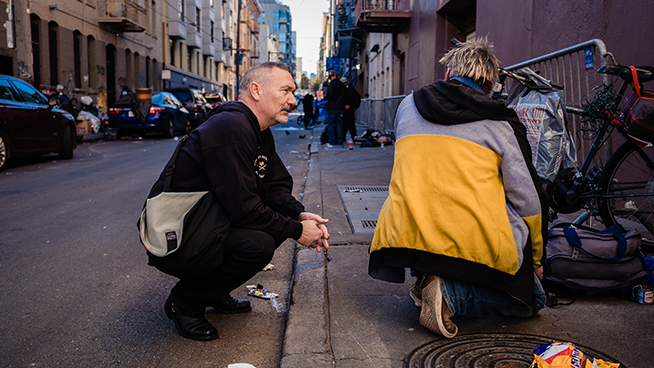 Paul Harkin, director of harm reduction at GLIDE speaks with people on a popular alley way with drug users in the Tenderloin neighborhood to handout narcan, fentanyl detection packets and tinfoil to those drug users in need as a part of outreach on the streets of San Francisco .
Photo by Nick Otto for the Washington Post

Haney says that he and Mayor London Breed authored the legislation and that now it’s up to the state legislature and Governor Newsom to authorize these sites.

Creating safe injections sites would give those addicted to illegal drugs a place to inject themselves under the supervision of medical professionals and would provide them with clean equipment, access to addiction counseling services, and prevent overdoses. Furthermore, these measures would also reduce HIV cases, decease drug-related hospitalizations, and reduce hazardous medical waste such as syringes from being thrown away on the streets of San Francisco. With these compounded advantages a cost-benefit analysis showed that just one of theses sites would net the city $3.5million from just one of these sites opening.

Supervisor Haney, who’s district accounts of 31% of users in SF, also says that community polls show 70% approval of these sites and that aiding those addicted to illegal substances can be just the right opportunity to offer treatment and recovery options

The city has spent the last four years working with the Department of Public Health to establish the Safe Injection Services Task Force whose goal is to develop recommendations on the operation of safe injection services (SIS).

“This has been a long time coming in San Francisco, led by the Safer Inside Coalition–every working group, Taskforce, hearing has come to the same conclusion: SF should open safe injection sites,” said Haney about the project. “These sites will reduce public drug use, get people into treatment, and save lives.

Haney also cited that out of the hundreds of other Overdose Prevention Programs around the world that there has been zero overdose deaths in those programs and that thousands have been safely transitioned into rehabilitation programs.

The city of San Francisco has reported 22,500 known illegal drug users and over 300 overdose deaths in 2019.

In a 2017 report London Breed wholly agreed that safe injection sites were a good part of the solution to the city’s drug problem though she did empathize with those who were still wary of the sites.

“However, this is too big of an issue for us to rule out any possible solutions. Inaction simply is no longer an option. Only together can we truly tackle this public health crisis and change the conditions on our streets.In this report, let us study the data, collaborate with one another, and take collective action.”