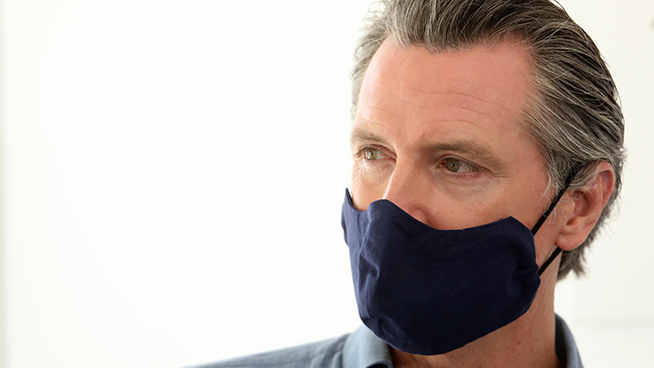 Gavin Newsom announced that California’s latest budget plan will have verbiage that allows it to enact punitive measures against counties seeking COVID-19 financial relief. The state would potentially withhold financial aid from those who would not comply with public heath measures.

The state of California has seen a recent 59% uptick in COVID cases just since Monday and the Governor, who is growing more frustrated, is attributing the surge on the lackadaisical, the stir crazy, and the purposely ignorant. In an attempt to simmer the bubbling pot, Newsom signed a mandatory state-wide requirement to wear face coverings in public. Though so far the Governor has been hesitant to enforce the mandate with a strong arm, Wednesday’s announcement shows Newsom inching away from an amicable settlement.

“When people thumb their nose and don’t come with a collaborative spirit and are simply unwilling to work to keep people safe and keep people healthy, then by all means the state of California has a responsibility, an obligation, legally and other or otherwise, to enforce those laws with the tools afforded to us,” Newsom said in a news conference.

“One of those tools is the power of the purse. If counties submit that they need more money to address this pandemic but are unwilling to enforce the rules and laws related to mitigating that pandemic it seems not only counter intuitive that you would continue to provide those recourses but also harmful to the broader effort. So we don’t want to be harmful, we want to be helpful, we want to be collaborative.”

Newsom repeated that he did not want to come off as seeking to punish anyone but highlighted the importance of having the verbiage allowing the state to have increased leverage over those who would put political and other motives above the health of their communities.

Though Newsom’s other shoe has yet to drop he says that so far no disciplinary options are being considered at the moment even for those disobeying the guidelines. There are currently 11 counties attempting to file for early reopenings who have been rejected. According to the Governor the process has been collaborative to date.

This of course raised the question, “How can you admonish those having small family barbecues but not thousands of protesters?”

To that Newsom responded with a the proverbial notion of the lemming.

“Just because someone did something that wasn’t good for their public heath doesn’t mean you should do it, use common sense.”

The Governor has been troubled recently by the large reports of Californians blatantly ignoring public health advisories and took to twitter several times Tuesday and spent half of his presser today imploring residents to wash their hands, wear a mask, and socially distance. A daunting task, Newsom said, when your state has the size and population larger than 21 states.

In a world where any point of view can be defended due to high volume of coverage and a low bar to publish, facts can, in fact, be blurred by a chorus of online voices. Newsom challenged those who are not fans of wearing a mask to be open minded to other points of view and to make sure they cross check their information across several sources.