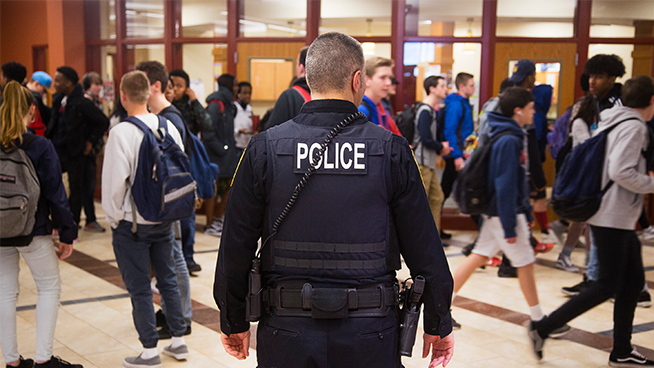 Tuesday evening the San Francisco Board of Education voted unanimously to cut ties with SFPD and to eliminate the presence of officers on school campuses.

Amid growing calls to defund police departments across the country, the San Francisco United School District (SFUSD) looked to reallocate funds used for school resource officer programs and into other community and equality based solutions.

The community and the school board both have expressed opposition for on-campus police presence for years, particularly after incidents of alleged police misconduct at Thurgood Marshall Academic High School in 2004 and Balboa High school in 2018.

In the meeting SFUSD sought to reconcile how their own actions have played into the “school-to-prison pipeline,” a branch from the tree of systemic racism that seeks to criminalize students and disproportionately affects Black students in San Francisco. Through 2016-2018 Black students made up less than 9% of the enrollment and yet made up 44% of arrests, citations, and detentions by SFPD.

The board’s decision to cut ties with the police department comes after a recent huge shift in American culture, in the wake of the deaths of George Floyd and Breonna Taylor, to actively dismantle systemic racism in every facet of our communities.

“SFUSD has an obligation to promote the healthy development of each and every one of its students, which includes protecting them from the impact of systemic racism and violence to the greatest extent possible while they are at school,” a statement from the meeting read.

The Board of Education declared their schools to be sanctuaries for students where they are to be protected from the presence of law enforcement. Schools have also asserted that no armed person, officer or not, will be allowed on campus moving forward. The Board is looking to seriously change how students interact with SFPD by acknowledging how that relationship has failed them in the past and how early exposure to policing can create lifelong disadvantages.

The Board has also launched an investigation on the state of their existing programs, which is due on December 31, 2020 and will be fully implement by the 2021-22 school year. This includes an inspection of their social-emotional supports, mental and behavioral health services, and other developmental services as a first step into transitioning into non-police interventions.

Adding and supplementing school-based social workers, psychologists, restorative justice practitioners, or other mental or behavioral health professionals will be the focus of this budget reallocation.

Schools are also looking to dramatically increase funding and capacity of its existing Street Violence Intervention Program (SVIP Crisis Response Unit) and other violence prevention programs such as the Ambassadors Program.