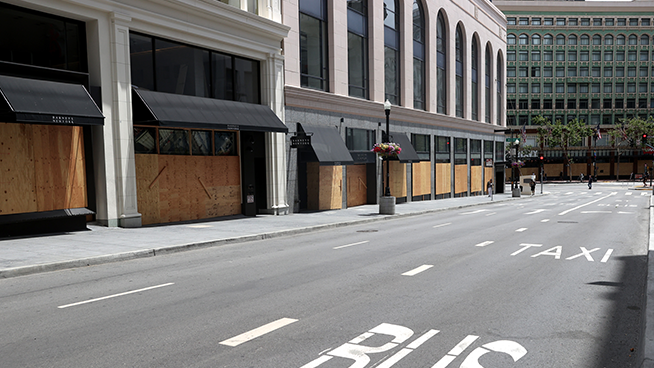 Storefronts sit boarded up on June 11, 2020 in San Francisco, California due to the coronavirus COVID-19 pandemic.
(Photo by Justin Sullivan/Getty Images)

San Francisco Mayor London Breed announced Friday that the city would be walking back its next step in its phased reopening of businesses.

Breed made the announcement over Twitter citing concern over the growing number of local COVID-19 cases.

“Our reopening process is guided by data and science. COVID-19 cases are rising throughout CA. We’re now seeing a rise in cases in SF too,” said Breed in a tweet. “Our numbers are still low but rising rapidly. As a result, we’re temporarily delaying the re-openings that were scheduled for Monday.”

The Mayor said that the city was encountering ballooning numbers in recent days, citing 103 new cases just yesterday. Conversely when San Francisco first reopened limited dining and retail two weeks ago it only had 20 active cases. These new numbers have the Mayor concerned about a potential explosive growth of cases in SF if nothing is done.

The announcement means prolonged openings for hair salons, barbers, museums, zoos, tattoo parlors, outdoor bars, and outdoor swimming. London Breed said so far there is no new date for when these amenities will actually reopen. She also said the city’s health officials are analyzing the data currently to help make that decision and understands the anxiety that comes with the announcement.

“I know people are anxious to reopen–I am too. But we can’t jeopardize the progress we’ve made. We’ll continue to let you know as soon as decisions are made,” said Breed.

San Francisco is not the only Bay Area county to be experiencing an influx of new cases as Marin and Contra Costa counties are seeing the largest jumps in the Bay Area, according to the state’s data. Santa Cruz County has also seen a sudden rise in cases over the last week. Despite this, the county has decided to reopen all of its beaches starting today.

We know that not wearing a mask and gathering in small groups, though seemingly harmless, can cause outbreaks like we’ve seen in Santa Cruz. However, Dr. Sonia Y. Angell, California Department of Public Health Director and State Health Officer, says that protesting and reopening the economy are also contributing factors to the recent increase in Bay Area COVID cases.

“At this time we don’t have exact numbers, but speaking to our counties we do think [protesting] is a contributor,” said Dr. Angell. “Of course, it is difficult to tease out exactly because at the same time people were going out to these protests, we also had increased movement in our communities because our economy is also opening up and people are going out for other reasons.”

“While we will not be able to distinguish exactly where somebody maybe have been exposed who tested positive, what’s increadibly important is we pay attention and realize any time we’re in public, particularly in large crowds, that we must maintain physical distance. That is the thing that will protect us, along with face coverings,” Dr. Angell continued.

Imperial County, located in Southern California on the Mexican and Arizonian border, also becomes the first county to have the state advise a reimplemented shelter-in-place order. The county, who has continuously failed its self attestation application for re-openings, has to begin locking down. California State Governor Gavin Newsom announced that if Imperial County did not reinstate its shelter-in-place order soon, he would intervene on a state level.

The state’s Secretary of Health Dr Ghaly said yesterday that even small changes can reflect large jumps in cases.

“What we really want to see is a situation where that R-effective goes down below 1. And each bit above one 1.1, 1.2, ends up growing our cases in quite dramatic levels. That’s when you see often those graphs that show the steep, almost hockey-stick like arc up,” said Dr Ghaly.

In response, Newsom has sent in emergency aid in the form of additional medical personnel from the National Guard and the FMAT (Family Medicine Accelerated Track) program and says the state will be absorbing the cost of extra efforts. These decisions were made in an attempt to continue to decompress local hospitals and mitigate the spread of COVID-19 in area and it’s surrounding counties. The state has been helping Imperial County chip away at their numbers for weeks by creating emergency Field Medical stations (FMS) which has increased their hospitalization capacity, which is currently 34% full, from 268 beds to 348 bed.

Governor Newsom reminded us that “this disease does not take a summer vacation,” and to not let our guard down for a moment.

As we move into summer, it is up to all of us to do so responsibly.#COVID19 has not gone away!