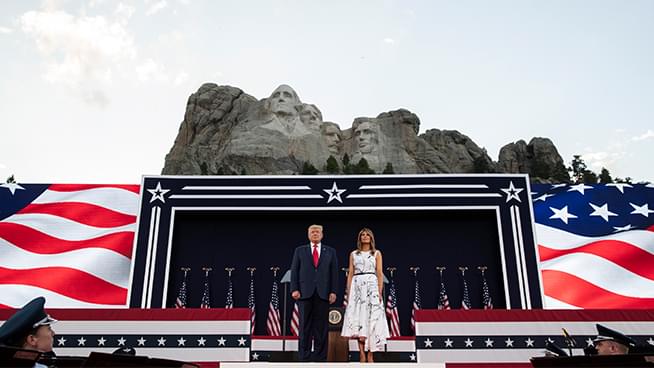 Fox said the virus was a hoax

A lawsuit has been filed by Washington League for Increased Transparency and Ethics (WASHLITE) against Fox News for its coronavirus coverage, alleging that various on-air statements playing down the scourge violated the state’s Consumer Protection Act.

If He Loses, He May Not Go

Trump is scheming to retain power in the event of an electoral loss in November, according to a former Colorado Senator Tim Wirth.

Rep. Liz Cheney has been challenging Trump on key issues, from national security and his handling of the health crisis to his personal Twitter attacks.

The Republican Party has Betrayed our Nation

The Senate will incorporate the annual intelligence policy legislation into the National Defense Authorization Act – but only after stripping language from the intelligence bill that would have required presidential campaigns to report offers of foreign election help.

Bayonets for a Peaceful Protest?

Chairman of the Joint Chiefs of Staff Gen. Mark Milley confirmed that soldiers who were deployed to Washington to quell the protests over George Floyd’s death were given bayonets.

Members of the Army’s 82nd Airborne Division from Fort Bragg in North Carolina and the 3rd U.S. Infantry Regiment based just outside D.C. were mobilized to D.C. last month as demonstrations over police treatment of Black Americans rocked the city.

For their June 2 deployment, these soldiers were given bayonets but instructed to keep them in their scabbards and not linked to their rifles

South Dakota Gov. Kristi Noem told Fox News on Tuesday that people will “not be social distancing” at a planned Friday celebration at Mount Rushmore, which President Trump is scheduled to attend ahead of Independence Day. Texas Gov. Greg Abbott issued an executive order Thursday requiring residents across the state to wear a face-covering in public spaces in counties with 20 or more positive Covid-19 cases.

President Trump is still not open to wearing a face mask.