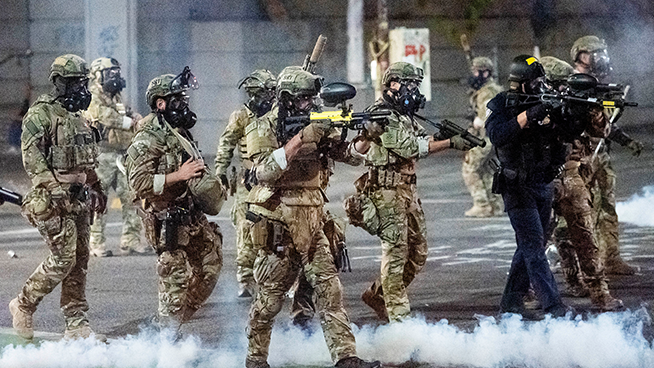 Over the weekend Americans watched an unsettling series of events unfold in Portland as scenes of continued protesting, police brutality, and even unlawful arrests by unmarked solders shocked the internet. Many have questioned the actions of the agents leaving many other cities in the country fearing they might be next on Trump’s list of cities to receive an influx of unwanted federal troops.

California Governor Gavin Newsom and Oakland Mayor Libby Schaaf were both vocal about not wanting Trump’s help on Monday.

“We are not experiencing any civil unrest right now, but I can think of nothing more likely to incite it than the presence of Trump-ordered military troops into Oakland,” said Schaaf in a tweet.

Oakland has been heavily criticized by Trump in the past, a place he called a living hell just weeks ago. So when leaders from the Department of Homeland Security (DHS) said over the weekend that they are likely to implement their tactics in Portland in other U.S. cities, Oakland came back into the spotlight.

“He continues to try and distract the American People from the fact that he’s not doing his job of protecting us from this pandemic,” Schaaf said in an interview on ABC7. “I don’t need law enforcement in Oakland, I need testing. I need personal protective equipment, we need direct income support for people out of work, that’s what we need.”

Schaaf said she proudly celebrates the city’s diversity and progressivism and remarked she could not wait to vote against Trump in November.

“I, for one, can not wait to run to the polls this November and hope that this nation gets rid of this out-of-touch authoritarian and actually resume our democratic society.”

We are not experiencing any civil unrest right now, but I can think of nothing more likely to incite it than the presence of Trump-ordered military troops into Oakland.

Gov. Newsom was also asked about the potential for federal agents being called in to cities in California, a thought he quickly shut down:

“The answer is no. We would reject it.”

Videos of federal officers ushering Portlanders into unmarked vans surfaced over the weekend and sparked national and international concern. The incidents also caused the American Civil Liberties Union (ACLU) to add to their ever-growing list of lawsuits against the Trump administration for the arrests. The reports also drew vehement responses from local elected leaders including Oregon’s Attorney General and Portland’s Mayor Ted Wheeler.

“They are sharply escalating the situation,” Wheeler told CNN on Sunday. “Their presence here is actually leading to more violence and more vandalism and it’s not helping the situation at all. They’re not wanted here, we haven’t asked them here, and in fact we want them to leave.”

Militarized Federal Agents from a patchwork of outside agencies have begun policing Portland (in rented minivans vans) without the explicit approval of the mayor, the state, or local municipalities. This is what that looks like in practice: pic.twitter.com/losap4SsgI

President Trump is using agents from the DHS to enact enforcement of areas he deems incapable or unwilling to quell anti-police-brutality protests that have sprouted from the death of George Flyod. The President has said that he would be cracking down on the protests in early July as they raged on, becoming one of the largest movements in American history. Sunday he defended his actions on Twitter citing that the city has lost control over “the anarchists and agitators.”

We are trying to help Portland, not hurt it. Their leadership has, for months, lost control of the anarchists and agitators. They are missing in action. We must protect Federal property, AND OUR PEOPLE. These were not merely protesters, these are the real deal!